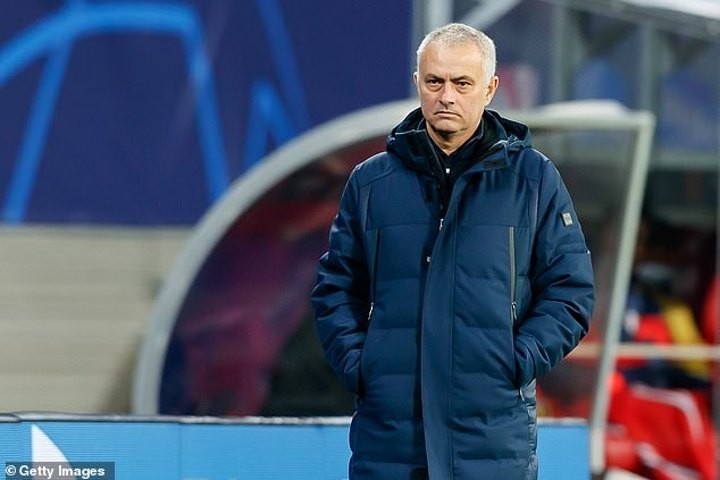 It must have been a shock for anybody who had their food packages delivered by Jose Mourinho this week. Royal Mail might have coined the phrase but this truly was a special delivery.

The Tottenham manager volunteered to help out the elderly amid the coronavirus crisis. Mourinho's effort was an incredibly charitable use of his time, and he has plenty of that on his hands right now. For once, the Portuguese might not mind.

While no one welcomed the suspension of the Premier League amid an ongoing global pandemic, it has, at least, given Mourinho a chance to breathe. As his side were thrashed 3-0 by RB Leipzig in one of the last major games played in Europe, he looked slightly defeated.

Spurs had not won in six games prior to the league being suspended. Now though, in the most bizarre of circumstances, Mourinho has been given an opportunity to fix his broken side.

The timeline might seem ridiculous in retrospect, but it is easy to forget Mourinho had just three days between being appointed and taking charge of his new side for the first time.

He arrived on November 20 and on the 23rd he masterminded a win over West Ham. The style changed immediately – more direct, more prominence for Dele Alli – but it still felt as though he was sticking a plaster on a more serious wound.

The 57-year-old's philosophy – or lack of a clear idea – has been criticised in recent years. Yet he remains one of the most impressive thinkers about the game on the planet.

Add in the fact that Mourinho assembled an entirely new backroom staff, including the highly rated young assistant Joao Sacramento, and it is obvious that he was ready to try something different.

With both the Premier League and Champions League to contend with, Mourinho will have had little time on the grass to get his ideas across.

There is likely to be a lengthy delay before the action restarts and teams might be granted a mini pre-season.

That could be exactly what Mourinho needs, giving him the opportunity to transmit his ideas and actually organise his side.

Not only that, but Spurs will almost certainly have a number of players they feared they would not see again this season available to them for their first match – whenever that may be.

Harry Kane suffered a hamstring injury against Southampton on New Year's Day but gave a positive update about his fitness on Tuesday.

'From a rehab point of view and personal point of view, I'm doing really well,' he said. 'I'm at a good stage now and just working hard, doing a lot of recovery, a lot of rehab and just waiting to see what happens to the season.

'Other than that, my family is well, and obviously everyone is thinking about coronavirus at the moment and it's a time to be together, to stay safe and hopefully everything will be alright.

'I'm not too far away. I'd normally hope to be back with the team in two or three weeks' time. I'm at a good stage, pretty much doing everything, now it's about building up my fitness. So from my personal point of view, I'm in a good place.'

With that timeframe, he might have been available for the last four or so games of the season. As it is, Kane, comfortably Spurs' most important player, will be an option for the remaining nine.

Mourinho also suggested Son Heung-min might be out for the campaign after an arm injury after scoring two against Aston Villa in February.

Yet he has already been filmed back on the training ground by Amazon, who are filming a fly-on-the wall documentary at the club this season, having isolated himself after flying back from South Korea.

Again, there is little reason to think he would not be available when the Premier League returns.

Even Steven Bergwijn, who got injured in Spurs' last league match against Burnley, could be an option. His ankle problem might clear up if the restart of the season stretches into May or June.

'I'm making progress,' Bergwijn told Spurs' official website. 'As you can see, I can walk now and (I've got) my new boot, so that's good news.

'At the moment I got the kick (against Burnley) I thought it was serious. I was in so much pain and that night, I couldn't sleep. It was bad, but we're making progress and I'll come back stronger.

'I've had a good time here. I still have (despite the injury) – but these things happen. It's football.'

Bergwijn has not played with Kane since joining in January. The idea of all three attacking options on the pitch immediately makes Spurs a stronger side than at any stage under Mourinho.

To put it another way, Mourinho has had to play Dele Alli as a striker for Spurs' last four games. It does demonstrate how limited their options are.

Others have come back too. Moussa Sissoko is training again after his knee surgery that followed a collision on New Year's Day.

Spurs are down in eighth, but a stronger squad for Mourinho means that could change when games are actually played again.

They are seven points behind Chelsea in fourth. That might not actually be the goal this season, though.

Given the situation surrounding Manchester City, fifth place might be enough to qualify for the Champions League – which seems like the minimum for Spurs to consider this a 'successful' season.

And they are only four points behind Manchester United in fifth, which is entirely possible to make up over the remaining nine games.

The awful situation around coronavirus has given Mourinho a more realistic chance of delivering at Spurs this season. It's a good thing he has got his practice in.