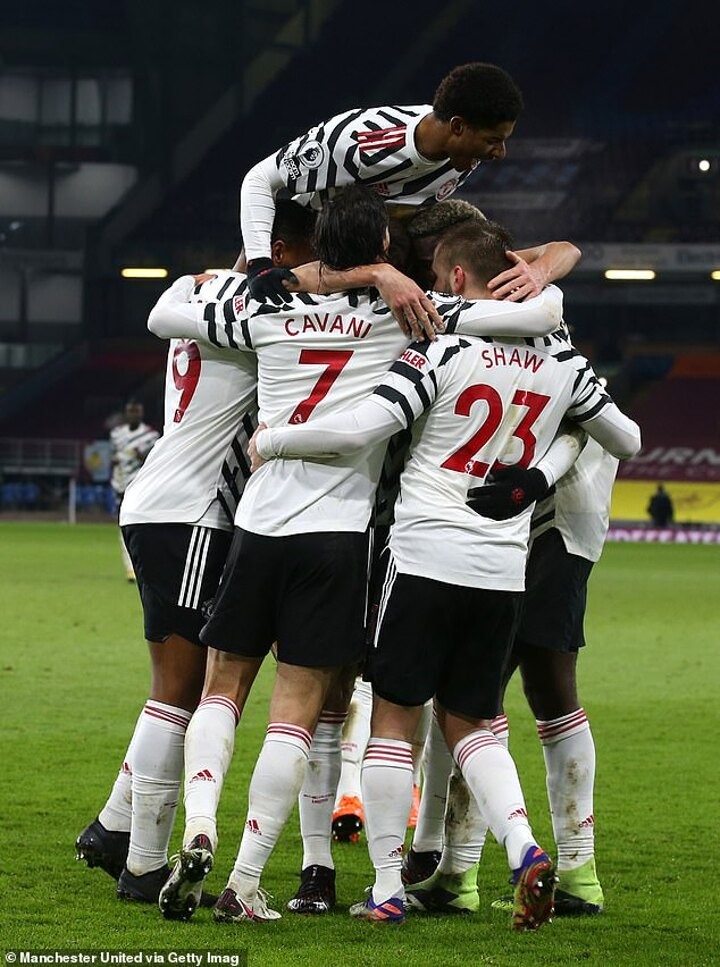 Virologists, public health doctors and epidemiologists are queuing up to urge football’s governing bodies to crack down on Covid rule-breakers who celebrate goals in tight-knit huddles.

The experts claim the players are setting a bad example to the nation and risking the a disastrous shut down in the national game.

Government has warned 'the optics' of players breaching social distancing rules coupled with a rampaging virus and high infections rates make it harder to justify the continuation of elite sport.

And now a series of urgent meetings have been set up between the Premier League, captains and managers to address the new Covid protocols - amid fears that continued non-compliance may trigger government intervention.

The latest expert to speak out is microbiologist Professor Paul Hunter, who was dismayed to see players hugging in celebration, after the Premier League had issued tough new guidance telling them to avoid just that only days before.

Team mates from Everton, Wolves, Sheffield United and Manchester United all before enjoyed exuberant and intimate celebrations after netting crucial goals on Tuesday.

And on Wednesday, those scenes were repeated with Manchester City and Fulham players forming huddles after crucial strikes.

And Hunter, a Professor of Medicine at the University of East Anglia, joined other leading academics in telling Sportsmail players are taking unnecessary risks with their own health by forming a celebratory scrum after goals.

‘That's how this thing spreads - inhaling breath and saliva that comes out of other people's mouths,’ said Hunter. ‘And if everyone is yelling while they do that it increases the risk.

‘Most of the air breathed in will be exhaled by other players. Group hugs should not be tolerated. There are all sorts of things players could do to celebrate.

‘Personally, I think it is important for football and sports to continue. It helps a lot of people get through. But it has to be done on a way that is safe and does not encourage unsafe behaviours in others. These sorts of behaviours are dangerous if they do influence others to think footballers can get away with it.

Football's governing bodies have come under pressure from government to eradicate the breaches of social distancing rules on and off the pitch after a series of high-profile incidents.

Ministers are concerned the flagrant abuse of social distancing by footballers will cause a souring of the public mood and force them into a position where they feel compelled to shutdown elite sport.

The Premier League still wants to leave it to the clubs to sanction players who break the rules, but Hunter believes firm action is needed to change behaviour.

‘I agree that in the grand scheme of things, football is not going to be driving this pandemic,' he told Sportsmail. 'But a number of footballers have made it clear in the last few months that they do not think the rules apply to them. They think they are above the law

‘If football does not get its act together over this it will be stopped almost certainly, to the detriment of British society.

‘There is no excuse for high-risk behaviour just because you are a footballer. The rules are there for everyone and apply for everyone. If football is shut down because of this we know where the fault lies. That is something that should not have needed to happen if clubs and the [football authorities] took this seriously.’

The Premier League’s new protocols, issued on Friday, include avoiding 'unnecessary contact at all times' including 'handshakes and hugging', as well as instructions to wear face masks on the bench, spot checks of dressing rooms and team buses to ensure social distancing measures are being followed.

The Premier League says that the clubs should investigate and sanction 'individual transgressions by relevant persons'.

Its guidance adds: 'Failure to do so may result in disciplinary action by the league individually against the relevant person, where appropriate, and/or against the club.'

But the league says the rules do not support on-field punishment for ignoring social distancing and they don't say what sanctions it will impose if clubs fail to act.

Solskjaer said: ‘It is difficult when you score because you want to celebrate with your teammates. We will try our best to follow the guidelines, but it is difficult.’

And Wilder said: ‘It is an emotional game on the pitch and on the touchline... it is unnatural and unreal (not to celebrate).'

The Premier League transgressions come after the FA Cup third round ties at the weekend when teams almost universally engaged in group hugs and Chorley and Crawley Town celebrated with a singsong and champagne, respectively, in the dressing room.

And this comes after breaches of Covid rules by seven Premier League players form five clubs during the festive period, when they attended parties in breach

Government sources have told Sportsmail that there is 'growing frustration' among ministers who don't want to see footballers breaking the rules in their private life or  hugging on the pitch.

‘Why take the risk to yourself or your contacts from a single 10 or 20 second scrum,' he said. 'You don't have to do it.

'If it happens once you get a yellow card and if it happens again you are off. It is a disincentive for that contact, recognising that it could have much bigger consequences.'

On Tuesday, Jonathan Van-Tam, England's deputy chief medical officer, has said that footballers should socially distance after scoring a goal.

Meanwhile, Troy Deeney has called on Prime Minister Boris Johnson to call a halt to football.

'Unless the government or governing bodies step in and say, "you cannot do this, you cannot do that", then it goes back to what's morally right,' Deeney told talkSPORT.