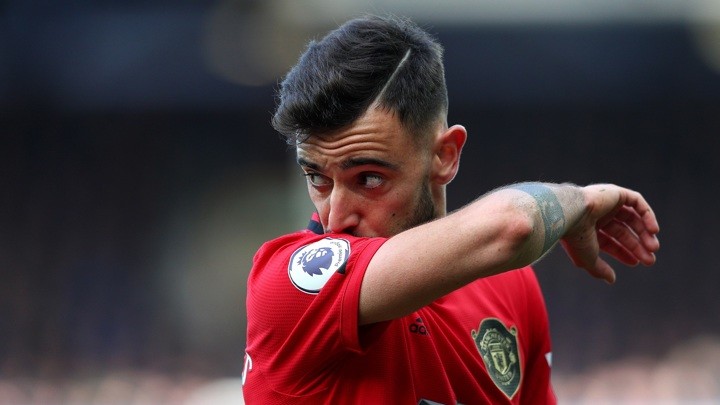 Manchester United star Bruno Fernandes joked he is the new Juan Sebastian Veron after sporting a goatee while isolating during the coronavirus pandemic.

While a number of players have shaved their heads due to social distancing policies during the coronavirus pandemic making it tricky to get a professional trim, Fernandes has only taken the razor to his facial hair.

United team-mate Diogo Dalot teased him by tweeting that he now looked like a character in Netflix drama Narcos.

"We've found the new Juan Sebastian Veron! But the hair, the hair needs to stay," he told MUTV .

Fernandes has quickly become a key figure since arriving at United from Sporting CP in January in a deal worth £67.6million (€80m/$99m).

The Portugal international is yet to taste defeat in his nine appearances for the club and has contributed three goals and four assists.

Ole Gunnar Solskjaer's backing has been important to him since he arrived at Old Trafford, but he says he would have been ready to give "200 per cent" to force himself into the manager's plans in different circumstances.

"For me, the most important was obviously the confidence of the coach. I need to know I am backed from the coach, because sometimes when you change club, not every time the coach wants you," said Fernandes.

"Not like I need to come because the coach wants me to play, no, not like this, but I want to feel the confidence from the coach: 'You come, you are a choice for me and you come. I need you, I want you.'

"It's not like you come and I ask, 'But I will play?' No, this for me is not the point. For me, the point is the confidence he has in me. If he has confidence in me, then the rest is working."

"I come and I will show to the coach I can play, I can be a choice for him, because sometimes you need to press yourself to be better and give more.

"In your mind, you want to play more than the others, but the others are thinking the same way with you.

"This is the confidence we need to have to keep improving, to keep training more and the healthy battles you need in the team. You are competing with someone, this one, this one and this one.