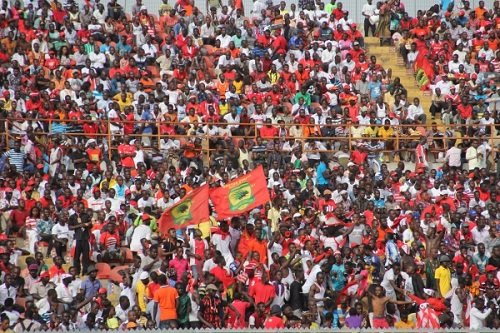 Asante Kotoko Communications Director David Obeng Nyarko has urged the fans to troop into the Baba Yara Sports Stadium to support the team when the venue is opened.

The Porcupine Warriors make a return to the Baba Yara Sports Stadium in over 18 months after the venue was closed down for renovation works.

Asante Kotoko played all their games in the 2020-21 Ghana Premier League games away from home.

The team will be playing in front of their fans in the upcoming season when the venue is officially opened.

David Obeng Nyarko has called on the fans to rally behind the team and make the atmosphere hostile to visiting teams when the season starts.

"We are expecting our fans to be in the stadium but they shouldn't come as spectators. They should create a very tough atmosphere which no club will come to Baba Yara and be comfortable" Obeng Nyarko told OTEC FM

"They (Fans) should come to the stadium to support, cheer and encourage the boys till the final whistle. They shouldn't come with the motive to insult or submit a hash treatment on a player" He added

"We will continue to need the prayers and love they have for us. Let's create an atmosphere that will help us grab all the maximum points that will make our season successful" He Concluded

The Porcupine Warriors are currently in Dubai for a preseason tour and will return before the start of the new season on October 29.