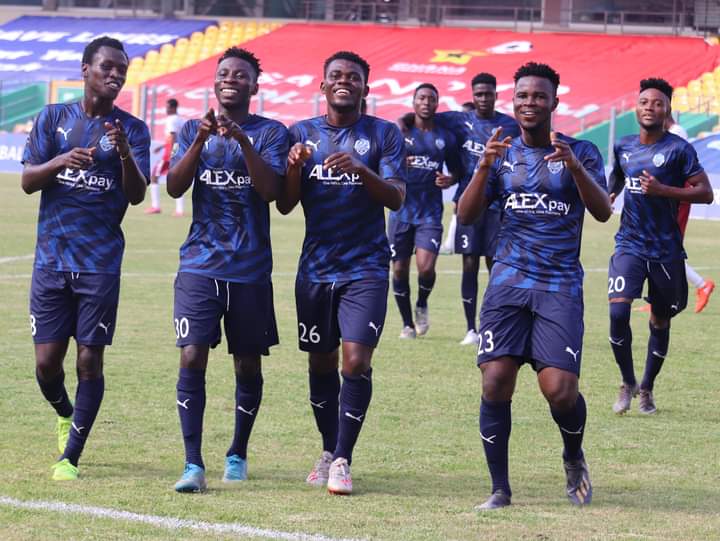 Accra Lions are a step close to achieving a historic Ghana Premier League promotion after a 2-1 win over Kotoku Royals at the Accra Sports Stadium on Saturday afternoon.

Winger Kelvin Kyen broke the deadlock after thirty-six minutes of dominant football from the hosts but Kotoku Royals pulled level through Clement Awuonyo in the second half.

It was another day in the office for the ambitious side who wasted no time in establishing their intentions, coming close twice in the first 15 minutes through Oliver Amedor and Joseph Addo.

But resilient defending from the visitors kept Accra Lions at bay for most part of half an hour.

However, they weren't going to be denied in the 36th minute after Dominic Nsobila threaded a beautiful pass to find Kyei, who controlled well before firing home.

Accra Lions kept their composure as they went into the break with the lead.

Ten minutes after the break, Kotoku Royals leveled theough Clement Awounyo, who stole the ball off the feet of Joseph Addo, before placing it on his favourite left foot to fire pass the Lions goalkeeper.

Accra Lions responded well with Rauf Salifu beating off his marker on the left to lay a pass to Dominic Nsobila, whose initial effort was blocked but was quick to get a rebound.

Rauf Salifu thought he had scored his 22nd goal of the game after slotting home from an Oliver Amedor pass but the referee ruled him offside.

Accra Lions maintained their dominance of the game and the zone with an important win that sends them a step closer to promotion.