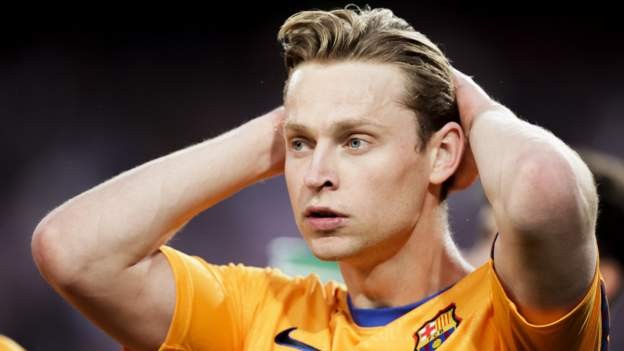 Barcelona signed De Jong from Ajax in 2019 for £65m plus add-ons and extended his contract the following year, tying him to the club until 2026

Manchester United have reached a broad agreement over a 65m euro (£56m) fee, plus add-ons, with Barcelona for the Netherlands midfielder Frenkie de Jong.

However, club sources say the deal is not done and there are still significant issues to work through.

But the development is seen as positive in terms of the transfer eventually reaching a conclusion.

Ten Hag led training for the first time on Monday with his non-international players.

United are still to make any signings this summer as they await a response from Denmark midfielder Christian Eriksen, 30, who also has an offer on the table from Brentford.

They are also looking at other positions but signing De Jong is viewed as a priority.

Ten Hag and his players are due to leave for a pre-season tour of Thailand and Australia on 8 July.

Ideally, the De Jong deal would be completed by then, although there is no deadline being put on the transfer.