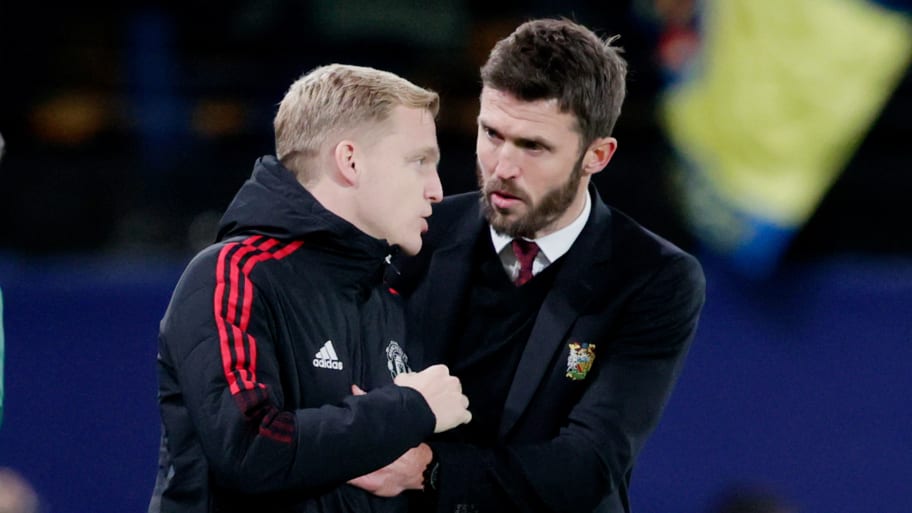 Manchester United caretaker manager Michael Carrick has credited midfielder Donny van de Beek for his versatility and suggested he could even be deployed in an unfamiliar false nine role.

Carrick was placed in temporary charge of United following Ole Gunnar Solskjaer's sacking last weekend, and one bone of contention during the Norwegian's time at the helm was his underuse of Van de Beek.

The 24-year-old had only played six time this season before Solskjaer was dismissed - including just 60 minutes in the Premier League overall - but Carrick drafted him straight into his first starting lineup as caretaker in the 2-0 Champions League victory at Villarreal on Tuesday, at the expense of Bruno Fernandes.

There Van de Beek was used in a holding role in a 4-3-3 shape, but Carrick believes the player offers Man Utd flexibility and has suggested the Dutchman could be used further forward - something never seen under his predecessor.

Speaking in his pre-match press conference ahead of facing Premier League leaders Chelsea on Sunday, the former England international said: “Donny’s one of those players where because he’s so flexible, he can play different positions.

“He’s done the same for Ajax before he came here, so he’s used to that, and he’s done that for Holland as well.

“Variety can be a real strength. We’ve got ideas where we think Donny is most suited but, as I said, actually he’s so flexible and so adaptable that the two or three positions in and around midfield.

“He even played, you could argue, a false nine for Ajax at times in the Champions League where they ended up getting beat by Tottenham. So, yeah, of course we’ve got ideas for it but being so flexible is a real strength and a credit to what he can be for the team.”

The Red Devils currently sit eighth in the Premier League and face the mammoth task of trying to get something from Stamford Bridge against Thomas Tuchel's in-form Chelsea side.

Carrick will be hoping Van de Beek could be the player to make the difference in what is expected to be his last game in charge, with United set to announce German coach Ralf Rangnick as their interim manager on a contract until the end of the season.

This article was originally published on 90min as Michael Carrick suggests Donny van de Beek could play in false 9 role.