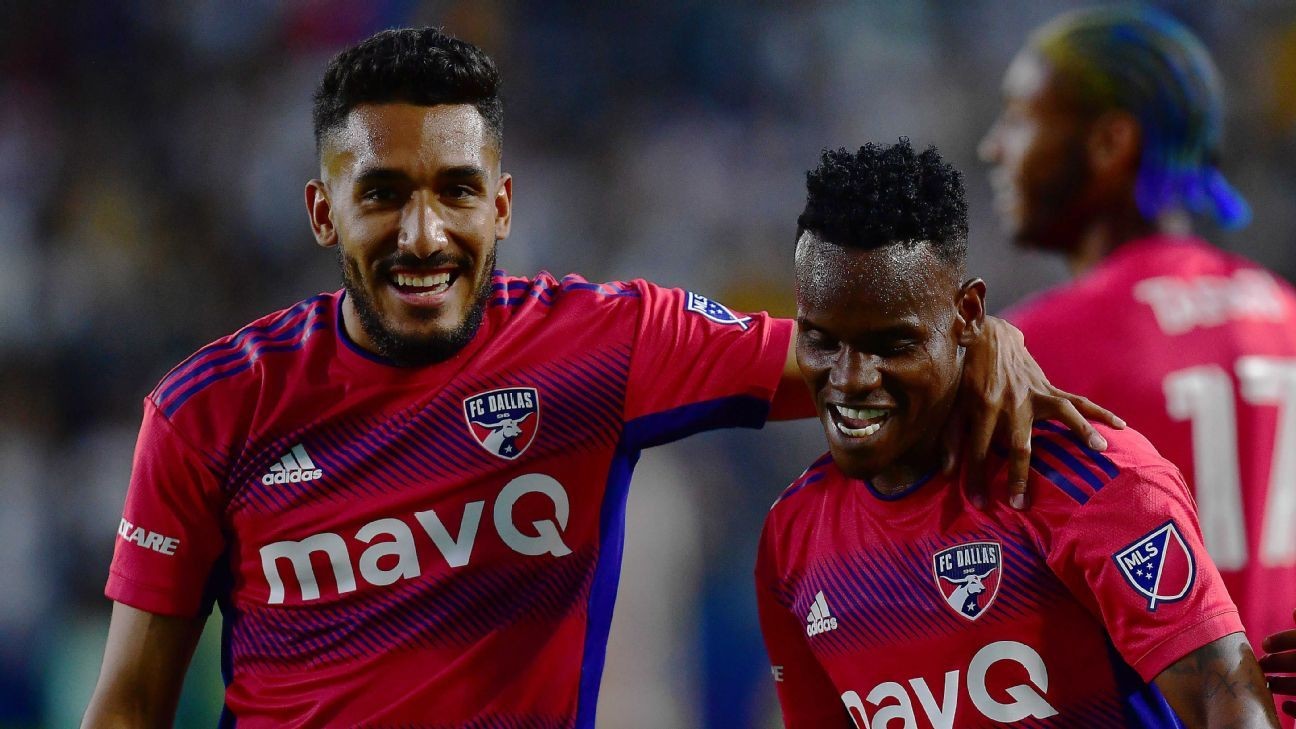 For the vast majority of this season, both Los Angeles clubs -- LAFC and the LA Galaxy -- have been at the sharp end of our Power Rankings, with seemingly few challengers in the Western Conference. While the Black and Gold are still on top, despite a tough loss to the Colorado Rapids in Commerce City, FC Dallas went to Carson, California, and reminded the Galaxy that Texas has its fair share of contenders, too, beating Javier Hernandez & Co. 3-1 at Dignity Health Sports Park.

A little further down the order, we've been sympathetic to the road-trip travails of Nashville SC (opening the season with eight straight away from home), but after opening brand-new GEODIS Park with a draw and a win, the Music City side went back on the road and were promptly defeated by the Houston Dynamo. A home-heavy schedule remains for tough-to-beat Nashville, but it will have to take advantage of those opportunities to balance out some of the bruising dropped points of its difficult start to 2022.

With Week 11 in the books, Kyle Bonagura and Caitlin Murray look at the results, break down where all 28 teams stand after a wild weekend of action and bring you the latest edition of MLS Power Rankings.

Here's the thing about MLS: you can be at the top of the Power Rankings and in what appears to be the best form in the league, and then a mid-tier team like the Colorado Rapids can unexpectedly punch you in the mouth. Squad rotation may be partly to blame, but LAFC looked flat. Still, no reason to believe they won't bounce back. -- Murray

The final stats of Philly's draw vs. the Red Bulls are more flattering that they should be: the Union added onto expected goals and shots after a 55th-minute red card to New York's Dylan Nealis, but in actuality this Union team looks like its defense will need to carry it. A disappointing draw at home against a 10-man side. -- Murray

FC Dallas is one of just two teams in MLS (LAFC is the other) averaging at least two points per game following a 3-1 win against the Galaxy. It has allowed a league low eight goals to this point and Jesus Ferreira leads the league with nine goals. -- Bonagura

A gritty draw on the road after playing down a man for 35 minutes? The Red Bulls will surely take it. There are longer-term worries about whether RBNY has the goal scorers to stay competitive throughout a full season, but at the moment they look resilient, thanks to solid team defending. -- Murray

play0:34Luquinhas flies to the goal and scores the equalizer

Luquinhas flies to the goal and scores the equalizer

Douglas Costa's second MLS goal was too little, too late, coming after the Galaxy fell behind 3-0 to FC Dallas in an eventual 3-1 loss. That's three straight losses in MLS for the Galaxy, who have scored just three goals in their past five league games. -- Bonagura

NYCFC continue to prove why they are the reigning MLS Cup champions. They are in arguably the best form in MLS right now, nabbing 13 of 15 possible points since their CONCACAF Champions League run ended, and their 2-0 win over Columbus was never really in doubt. Their past three games in league play have also been clean sheets, fitting for a team that proudly wears the name of sponsor "Dude Wipes" on their kits. -- Murray

Don't look now, but we have a new team atop the Eastern Conference standings. Montreal is now unbeaten in its past eight, and it is playing like a well-drilled, cohesive side, with a comfortable 2-0 win over Charlotte. -- Murray

A stoppage-time game-winning goal from Kyle Smith, the defender who worked as an accountant before making the Lions squad, was a nice bit of fodder for Orlando fans and fun flourish to a valuable road win. Orlando clearly outplayed Toronto, and this weekend it found itself "up" in an up-and-down season so far. -- Murray

play0:39Kyle Smith puts Orlando City on the board in extra time

Kyle Smith puts Orlando City on the board in extra time

With 11 matches played in MLS this year, Nashville still hasn't been involved in one where either team scored more than two goals. The trend continued Saturday with a 2-0 loss at Houston, despite the Dynamo's Adam Lundqvist being sent off in the 35th minute. -- Bonagura

Since conceding six to NYCFC on April 17, RSL have allowed just three goals in four games, including just one in a 2-1 win against Austin Saturday. Andrew Brody scored the game-winner in the 88th minute after Mikael Chang leveled the scored at the 55th-minute mark. -- Bonagura

The big news in Austin came Friday when the club announced a three-year extension for coach Josh Wolff, which reflects the work he's done improving the team in Year 2. However, a 2-1 loss at Real Salt Lake on Saturday made it consecutive defeats for the Verde. -- Bonagura

What a way to break a five-match winless streak. Sebastian Blanco and Nathan Fogaca both scored braces in a 7-2 demolition of Sporting KC that came after a 2-0 midweek loss to LAFC in Open Cup play. -- Bonagura

play3:20Portland puts up 7 goals in win over Sporting KC

The Portland Timbers put up seven goals as they get the 7-2 win over Sporting Kansas City.

The Dynamo went through USL side San Antonio to reach the U.S. Open Cup round of 16 before tacking on a 2-0 win against Nashville to get back on track. Adalberto Carrasquilla and Darwin Quintero were the goal scorers vs. Nashville. -- Bonagura

As former Rapids coach Pablo Mastroeni once said, "Stats will lose to the human spirit every day." To that end, credit goes to current coach Robin Fraser, who managed to get his squad to shake off a loss in the U.S. Open Cup only two days earlier to then beat LAFC 2-0 on Sunday. LAFC dominated possession and took just as many shots, but Colorado shut them down from quality chances. -- Murray

Eleven matches in to the season and the Five Stripes continue to look mediocre ... most of the time. Both goals in a 2-2 draw with New England, however, were beautifully taken -- the first from Thiago Almada, the second from Luiz Araujo. -- Bonagura

Robin Lod's first-half goal at Seattle went to waste for the Loons, who allowed three second-half goals from the Sounders for their third straight loss. A challenging week awaits with games against the Galaxy and Dallas. -- Bonagura

play0:59Luciano Acosta capitalizes on the keepers mistake to give Cincinnati the late lead

FC Cincinnati's Luciano Acosta takes the ball from the keeper and slots home the goal to take a 2-1 lead.

A win on the road in MLS is never something to discount -- those three points could mean a lot come Decision Day -- but the end result on Sunday came more down to the Fire gifting Cincy two goals than Cincy being especially effective. -- Murray

After setting the MLS single-season points record in 2021, New England sits alone in 11th place in the Eastern Conference. After going up 2-1 at Atlanta through two Adam Buksa goals, the Revs had to settle for a 2-2 draw. -- Bonagura

The Crew got beaten by a team in NYCFC that is simply in much better form and more talented to boot. But that aside, there are fundamental questions to ask about this Crew team. Coach Caleb Porter tweaked his side's formation at halftime to no avail, and it appears more tweaking will be coming because what's happening right now isn't enough. -- Murray

After becoming the first MLS team to win the CONCACAF Champions League last week, the heavily rotated Sounders were bounced from the Open Cup on penalties by San Jose before a 3-1 MLS win against Minnesota on Sunday. All three goals -- from Raul Ruidiaz (from the penalty spot), Cristian Roldan and Nicolas Lodeiro -- came in the second half after Minnesota led 1-0 at halftime. -- Bonagura

Nicolas Lodeiro tallies the goal in the 94th minute to secure a 3-1 home victory for the Seattle Sounders.

A 2-0 loss at home is never a good thing, but falling to Montreal raises more important longer-term questions. The midfield diamond formation that head coach Miguel Angel Ramirez has insisted upon doesn't look like a good fit, and Charlotte can barely get the ball out of the midfield to its attack. That's a big problem. -- Murray

Chicago's backslide continues. Although Cincy didn't play particularly well, registering barely one expected goal, it still bested Chicago 2-1 because the Fire simply can't get out of their own way. Both of Cincinnati's goals came from Fire errors, and it's impressive how Chicago finds new ways to lose.-- Murray

Sunday's loss to Orlando set a dubious milestone for Toronto: it is now 22 games without a shutout, including MLS play and the Canadian Championship, stretching back to last year. (If you want to include MLS preseason, it's 28 games.) TFC's last clean sheet came in a scoreless draw in September. It's hard to have success without a capable defense. -- Murray

After cruising by South Georgia in the U.S. Open Cup during the week, Miami went up 2-0 on D.C. United in the first half only to draw, 2-2. Miami is winless in three MLS matches headed into a rough week with games against Philly and the New York Red Bulls. --Bonagura

Ola Kamara finds the net as D.C. United ties it 2-2 vs. Inter Miami.

D.C. fell behind 2-0 in the first half against Inter Miami, but a first-half stoppage-time goal from Taxiarchis Fountas and a second-half Ola Kamara goal rescued the point. With seven points in their past four games, D.C. is trending in the right direction. -- Bonagura

In perhaps one of Lucas Cavallini's best games in a Whitecaps kit, Vancouver could still only eke out a 3-3 draw to the Earthquakes, a team that has similarly struggled so far this season. 'Caps fans may feel good about the attacking prowess they saw, but it's hard to ignore the continuing defensive woes. -- Murray

It's a wonder why Portland ever traded away striker Jeremy Ebobisse, and his two-goal performance for the Quakes against Vancouver only adds more fodder, but it's a shame there is not a better team to support San Jose's attack. The defending, or lack thereof, does not bode well. -- Murray

The wheels are coming off in Kansas City. SKC have the worst points per match average (0.75) and goal differential (minus-13) in MLS after a humiliating 7-2 loss to Portland. -- Bonagura