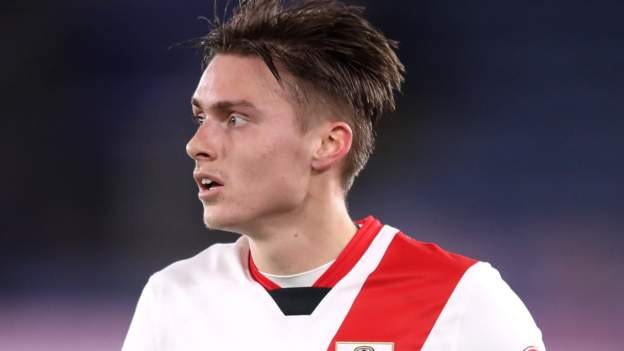 Will Smallbone was injured in the second half at Leicester

Southampton midfielder Will Smallbone faces up to six months out with an anterior cruciate ligament injury, manager Ralph Hasenhuttl says.

The Republic of Ireland Under-21 international was injured during Saturday's 2-0 defeat at Leicester.

"It's an ACL injury, so half a year out maybe," Hasenhuttl said. "It's horrible for the young lad and for us."

"At the moment with these injuries, it is definitely not our best side to be honest," Hasenhuttl said.

"But there are maybe some circumstances at the moment in this strange season which lead to a lot of problems with injuries that we didn't have the whole of last season.

"So it's interesting to see what this season does to the players. We are not the only team that struggles with injuries so it's quite strange."

Basingstoke-born Smallbone, 20, who joined the club as an eight-year-old, was making his first appearance since September's 5-2 defeat against Tottenham.

He has played in 12 Premier League matches since his debut in February last year.