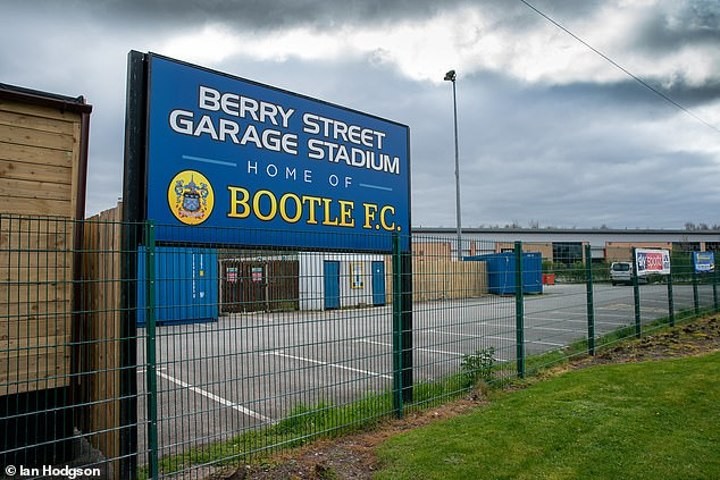 Up and down the country, amateur football, rugby and cricket clubs are struggling to survive the lockdown.

Sportsmail's Daniel Matthews looks at how the suspension of football, rugby and cricket due to coronavirus has affected three clubs.

Champagne corks had been twitching all over Merseyside.

Last month, Vauxhall Motors secured promotion from the North West Counties First Division South. Anfield-based Lower Breck were champions-elect in the First Division North. Bootle were on course to climb out of the Premier Division, too.

Now? Nothing. Not after the FA cancelled most non-League football. It is not just an anxious time for the area’s biggest club.

‘The main difference between us and Liverpool is that if Liverpool don’t get awarded the title, they will continue into next season,’ says Bootle boss Joe Doran.

‘Whereas football clubs like ours face a real threat, a risk of not being able to continue.’

The battle for silverware is not quite over. Bootle, Vauxhall Motors and Lower Breck are among the dozens of teams who wrote to the FA over the decision to cancel the season. But now many clubs face a fight for survival, too. As coronavirus continues to wreak havoc, this could prove a crisis for many in England’s grassroots pyramid.

‘If one club goes under because of this, the FA and the Premier League have a lot to answer for,’ Doran adds. ‘It would rip the heart out of England.’

Few areas need the familiar rhythm of sport like Bootle, which think tank Centre For Towns recently ranked second in England for health deprivation (behind nearby Kirkby).

‘My grandad is president and he has been with the club 64 years,’ Doran says. ‘He’s 84 now. He started off as a player, then became manager, secretary, chairman. My uncles and uncles-in-law have all been on the committee over the years. My auntie is bar manager.’

Doran was a club mascot aged four. Now he is manager, secretary, treasurer and bar licensee. ‘This is my life,’ he says.

Only over the coming weeks will a clearer picture emerge. What happens to the £5,700 rent they pay the council each year?

‘We have the football pitch, a bar where we have Sky Sports games on, a function room that does really well — about 50-60 parties a year,’ Doran explains.

‘We also have five-a-side and seven-a-side pitches we hire out. So our cash flow has basically been ripped out from underneath us.’

Promotion would have brought more fans, more exposure. Now no one is using the pitches or the function room, which generates around £100,000 a year and keeps the club afloat.

‘Our gate receipts and sponsorship wouldn’t equate to 20 per cent of the money we turn over on the bar,’ Doran says. ‘No football club can survive on just matchday income. ‘We are a not-for-profit club, so all of the money we make we plough back into local facilities. Back in 2004-05, when we first came on site, it was a flat piece of land with nothing on it. You give people who can’t afford to go to Anfield or Goodison, or even have Sky, that little release.’

Bootle also collect for nearby foodbanks. ‘When we have a game called off, the food we have bought, we always donate it to vulnerable families or the homeless,’ Doran adds. No support has come from Liverpool or Everton. And at this time of need, Doran claims the county FA have been pushing for fines and fees over outstanding red and yellow cards.

‘I would propose to our committee that if any club in our community is under threat, then we would support them,’ Doran says.

‘I would like to think that the Premier League clubs are thinking the same way.’

Down Wilkinson Way, the philosophy of recent years has been simple.

‘Build it and they will come,’ explains president Geoff Bond. ‘And they have, in their droves.’

On any given weekend, more than 1,000 players cross these white lines — from Under 5s up to L’escargots (veteran team).

‘The week before the season ended, we put out something like 32 sides. It’s crazy,’ says Bond.

Not long ago, Farnham moved across town from a landfill site to plush new surroundings. Now, with coronavirus suffocating sport, the club risk of joining the scrapheap. ‘We are leaving no stone unturned to find the money we need to survive,’ says chairman Geoff Robins. ‘It’s going to be tough.’

As of last month, the club required tens of thousands of pounds to ensure they were still playing next season.

Farnham was once the home of Jonny Wilkinson, England scrum-half Peter Richards and Scotland back row Ryan Wilson. Over the past decade, the club has been one of the success stories of amateur rugby. Their first XV has climbed five divisions in a decade. The latest promotion was confirmed after coronavirus curtailed the current campaign. Next season, Farnham will play in London 1 South — the highest tier in the club’s history.

Provided they make it that far. For the future of this and many rugby clubs is in doubt. Nearby Esher expect to lose £160,000 in revenue over the next three months.

Farnham devised a 20-point plan to fight back. Their call for donations has been answered by many members and, crucially, the club have secured a line of credit from a major lender. They have also applied for help from the RFU and local government. Everything and anything will help. The club still owe six-figure sums following their £2million move.

‘Ten years ago we were playing on possibly the worst facilities in the south east. Everybody who came to Farnham would complain about the smelly mud,’ says Bond. ‘There was no need for floodlights because we had methane burners around the pitches because it was a landfill!’

Now their clubhouse is the envy of the region and a magnet for weddings and parties. Unfortunately, though, better facilities also mean bigger outgoings.

Farnham don’t pay players but they do fork out for coaches, a chef, bar manager and book-keeper. Looking after the pitches alone costs up to £25,000 a year.

This month they were due to host their growing sevens tournament, as well as the annual sportsmen’s lunch which raises tens of thousands of pounds.

Hundreds of guests had already bought tickets. Last year it was a 500 sell-out.

The plan is to push the lunch back to September, but there is a risk the coffers will run dry by July unless costs are cut and funds are raised.

Frustration and uncertainty abound down the road, too.

Farnham Town Football Club were on course for promotion from Combined Counties Division One before the FA cancelled much of non-League, while the town’s cricket team face no play at all.

Farnham is one of the oldest cricket clubs in the country, dating back to 1782.

For the past few decades, the Thorpe family has been its beating heart. Graham grew up near the rugby club’s old ground and went on to win 100 Test caps for England. His dad Geoff is still on the committee, his nephew Nathan plays for the first XI.

‘Our aim is just to hunker down, get through the summer and re-emerge next year,’ says chairman David Godden. They are fortunate. Unusually, Farnham have built up reserves in recent years.

The ripples of their cost- cutting will be felt at nearby Crondall, a village Sunday side who Farnham would normally pay for use of their ground.

Cricket was already battling to arrest a national decline in playing numbers. Rugby has suffered a similar problem in recent decades.

Even Eddie Jones is taking a pay cut amid fears the RFU will lose up to £50m in revenue over the next 18 months. The sport’s governing body last week announced £7m in relief for grassroots clubs.

‘Every international player has had a junior club where they started,’ says Bond.

‘It has to be coveted. We have to ensure it doesn’t fade away.’

On the up: Wilkinson (circled) with the Under 13s at Farnham rex

In this corner of North Yorkshire, they haven’t faced an attack this threatening for nearly two decades.

‘Foot-and-mouth shut local cricket leagues down for pretty much one summer,’ remembers Folkton and Flixton secretary David Hutchinson. ‘That was the last time cricket and sport in general was affected as badly as this.’ The club survived that 2001 outbreak. And Hutchinson insists they will beat this invisible killer, too. After all, only 18 months ago, this small outfit conquered the land.

In September 2018, Folkton and Flixton were crowned National Village Cup champions at Lord’s. Only now is the true significance of that triumph becoming clear.

‘That created an awful lot of interest and revenue into the club,’ Hutchinson explains. ‘There is a bit of that left, which we will be able to survive on.’

With coronavirus threatening to wipe out the upcoming season, there are concerns over how some counties will cope, let alone the 7,000 or so smaller clubs who have anchored the sport for centuries. They rely on match fees, subscriptions, fundraisers and money made at the bar.

With those revenue streams all but cut off, many sides will be stretched to their limits.

‘It is pretty serious,’ Hutchinson admits. ‘We need to play to make the money to be able to carry on, basically.’

Typically, the club would host race nights and quiz nights, as well as schools and rep cricket. Each week lost to coronavirus brings more lost revenue. Hutchinson estimates they will need to raise £6,000 to pay for insurance and to maintain the ground — to survive.

The hope is that players who have already paid subs will forgo refunds. The rest will have to come from donations.

‘You just sort of hope that if push came to shove, people would stick their hands in their pockets,’ he adds. ‘It is not just the money, though.’

In rural communities, isolation and a lack of opportunities already pose a mental and physical strain. For many, cricket fills a hole.

‘My own son is 19, he basically lives to play cricket,’ Hutchinson says.

‘The young ones in particular are going to have absolutely nothing to do. They could be easily looking at six months without any serious activity.’

Amid the coronavirus crisis, the ECB acknowledged that ‘local clubs will have such a huge role to play in our nation’s response to coming out of this situation’.

Eventually, to help grassroots cricket survive through loans, grants and repayment holidays, the ECB allocated £20million; around half of the amount they pumped into their new Hundred tournament.

‘I’m not convinced that watching two hours of cricket on telly is going to turn you into a lifelong lover of cricket,’ said Hutchinson of The Hundred. ‘It has always been the local clubs that have done that. This is where the ECB need to switch on.

‘If they had given half that attention to the clubs in the first place, to bring the youngsters through, then they wouldn’t be having the decline in viewing figures that they are having now.’