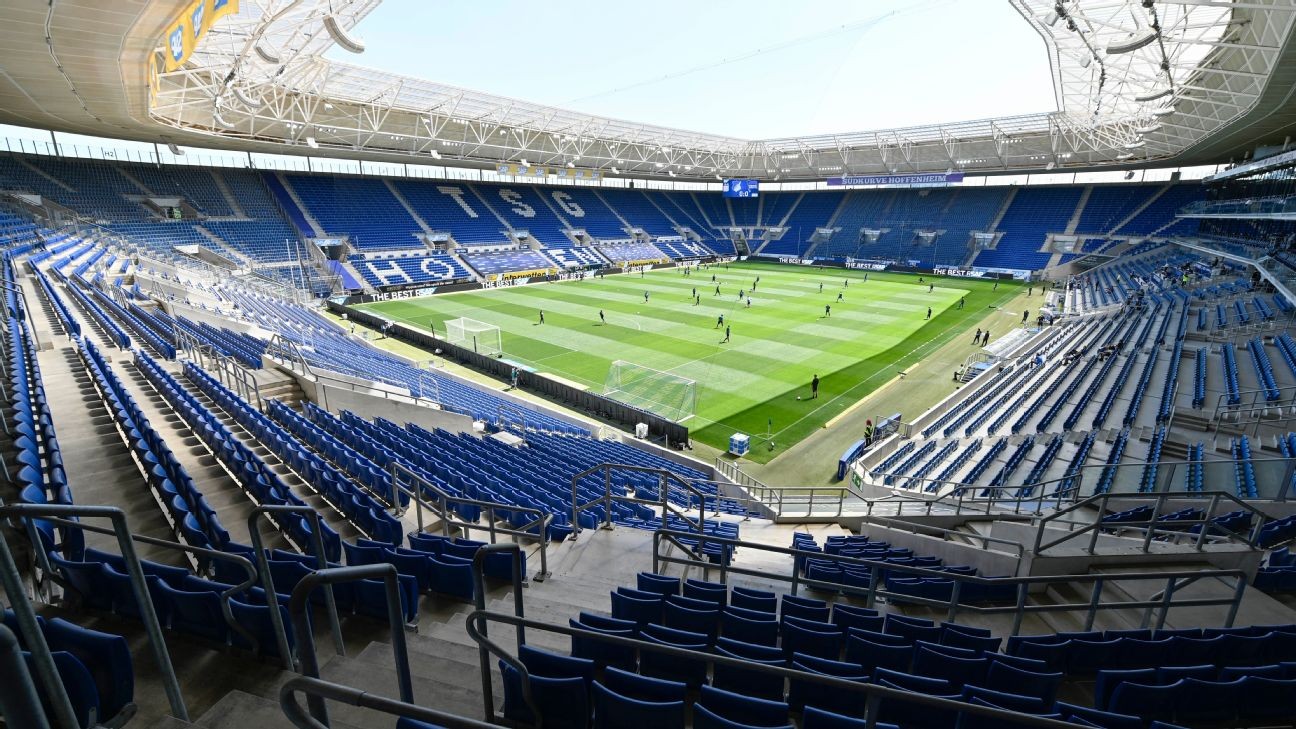 When the Bundesliga resumed last weekend, it was not just players, coaches and officials dealing with "the new normal" brought about by the coronavirus. Commentators also faced doing their job with the prospect of new problems; barking dogs and noisy toddlers might not realise someone is trying to do live coverage of Bayern Munich in the next room.

Men and women behind the microphone, as well as producers and various technical staff, are having to work from home because of restricted access to the sanitised stadiums of the Bundesliga, as well as TV studios. And so, live from my office in southern England, I described the scenes for BT Sport viewers as Hoffenheim lost 3-0 at home to Hertha Berlin.

- Hamilton, Uersfeld: Lessons from the Bundesliga's return
- Stream new episodes of ESPN FC Monday-Friday on ESPN+
- Stream every episode of 30 for 30: Soccer Stories on ESPN+

This was broadcasting, but not as we know it.

In the days leading up to the game, it felt as if enough electrical equipment to build the International Space Station was delivered to my home. With the help of a masked engineer operating at a safe distance, it was lashed together, but please do not ask me how it works.

This technical wizardry left my office looking rather like the flight deck of a 747 preparing for takeoff. Armed with a set of instructions about which buttons to push and when, I was linked to the studios of BT Sport in East London as well as to producer Jayne Dinnin, who was also working from home and wearing her fluffy carpet slippers.

It's been a while, but finally... match 131 of my season. Hoffenheim v Hertha from my lounge on BTSport3. It's not often I can wear my flamingo slippers for work! @Bundesliga_EN #TSGBSC pic.twitter.com/EaEuVia6dN

I should say that, even pre-pandemic, it was not totally uncommon for commentators to broadcast games using TV pictures -- we call it working "off tube" in the trade -- but usually that takes place in a soundproof booth. Calling a game from home, though? That was a new one on me. I doubted it could even be done, but thanks to some very clever technicians, pictures from a stadium more than 500 miles away were beamed into my house.

There was one snag: No matter how sophisticated the kit you are using might be, there is dependence on the strength of a broadband signal. Any weakness can lead to the picture freezing at a vital moment, which happened to me in the second half from Hoffenheim.

Robert Skov was about to take a corner for the home team when the pictures froze and the next thing I saw was Hertha goalkeeper Rune Jarstein with the ball in his hands. What happened in those missing 20 seconds will remain one of life's mysteries.

My colleague Paul Dempsey had an even better story as he commentated on Borussia Dortmund's 4-0 win against Schalke from his living room. During the first half, a delivery man from the local supermarket kept banging on his front door. How was he to know -- or care -- that Erling Haaland was about to open the scoring?

How else did this experience compare with a commentator's usual routine?

For a start, there is no travel involved, which is not the worst thing if you are avoiding traffic jams, delayed trains and endless checks at airports. And sitting at home also means there is warmth and plenty of available refreshments, which is not always the case when you are stuck on a lofty, cold gantry at Everton or Watford. That is where the good news ends, though.

Covering a match in an empty stadium with no atmosphere -- Geisterspiele, as Germans call these "ghost games" -- is the biggest difference. However good the entertainment might be, the event feels like a reserve game. German viewers have the option of watching with added sound effects and that is worth a try to pump up the feel of it all.

Ian Darke called the Bundesliga match between Hoffenheim and Hertha Berlin from his own home.

Then there are the small things that can prove vital in this job, but are denied by not being at a ground. For example, there is no chance for a bit of banter and swapping information with colleagues in the media room over a cup of tea and a bite to eat.

Nor can we go to that privileged spot inside the tunnel where you might get the chance to check a snippet of vital late team news; think of the Ronaldo drama when he was out of -- then back in -- the Brazil team before the 1998 World Cup final. You might also get to learn a team's tactical formation, though Jose Mourinho told me once: "You will work it out for yourself."

Remembering that 90% of a commentator's job is identifying the players, another vital tool lost in lockdown is the chance to watch players warm up. At the ground, you can look through binoculars to check on anyone who might be unfamiliar.

Hand on heart, I had not seen a lot of Hoffenheim and Hertha this season. It meant that, despite watching a few tapes ahead of their meeting, calling the game with those occasional picture freezes was one of my toughest assignments. I think we got away with it, though, and responses from viewers were kind. They understand there might be glitches in these troubled times, but most were glad just to have some proper football to watch.

But home-produced commentaries? They will never catch on, even if the commentator can be mowing the lawn five minutes after the game.

I will do it all again on Sunday when title-chasing RB Leipzig play Mainz. Wish me luck.