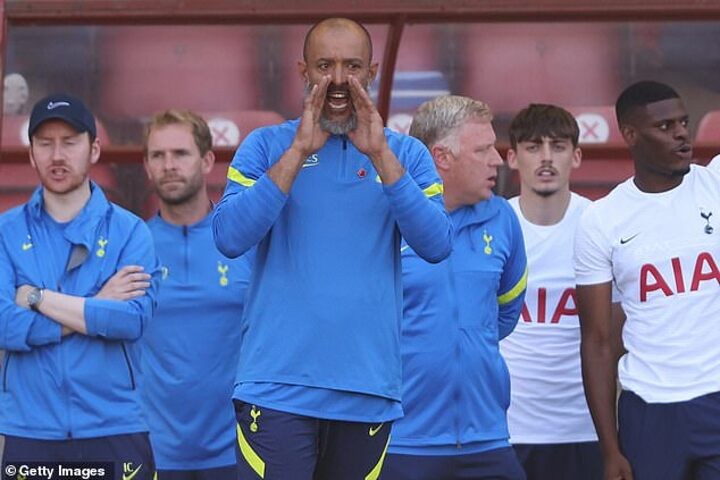 It's the dawn of a new chapter at Tottenham Hotspur as new head coach Nuno Espirito Santo takes the reins of a struggling side threatening to lose its place at the top end of the Premier League table.

Spurs are facing a big rebuild after their season ended on a flat note when Jose Mourinho was sacked the week before a cup final and caretaker Ryan Mason saw out the remainder of the campaign, with the team being forced to settle for seventh place.

There's plenty of work to do for Espirito Santo - who will be looking to play three at the back to give a solid defensive foundation while trying to get the best out of his attackers, including star men Harry Kane and Son Heung-min.

Kane has been strongly linked with an exit and that question mark will hang over the squad until the window slams shut, but the Portuguese man has a few more issues to thrash out as he prepares for his first Premier League game on August 15.

Sportsmail takes a look at how Tottenham could possibly line up next season as their new boss looks to thrust the team into a brighter era.

The French captain has his moments but he looked much steadier towards the end of the last campaign and is still the man to keep hold of the gloves in north London - if he remains happy in the capital.

There isn't another goalkeeper currently out there that Spurs can attract that would be a serious upgrade on the former Lyon man, and he has served the club well as he approaches a decade with the team.

His contract expires next summer and his future should hinge massively on how his performs in this campaign.

Tottenham had been linked with a move for Burnley's Nick Pope and former Aston Villa goalkeeper Pierluigi Gollini - now with Atalanta - is expected to sign on loan, but don't expect him to be a threat to Lloris. He'll just provide competition, for now.

There's likely to be some serious changes in defence after some torrid showings at the back last season, including some clangers from Dier himself - with Mourinho forced to drop him for long spells of the campaign.

Dier has faced plenty of fan anger in recent times and many have called for the club to cash in on him, but a new season and a new boss offers him a chance to turn over a new leaf - and his fluency in Portuguese could help him forge a good connection to Espirito Santo as well.

Dier has constantly reaffirmed his commitment to the cause at Spurs having signed a long-term deal last summer and is unlikely to be pushing for a move any time soon, so unless the club sign a few new defenders expect him to stay put.

The Belgian has been another player linked with a Spurs exit after their disappointing slump to seventh place to confine them to a season in the UEFA Conference League, and at the age of 32 you can bet Alderweireld is eager to see out his career with a successful team.

He still has two years remaining on his current contract and will be crucial to organising the defence as Espirito Santo looks to shore things up. His experience will be valuable and it won't help Spurs to be fielding a host of fresh faces at the back.

Alderweireld was once an unquestionable member of the team alongside long-time friend Jan Vertonghen, but his place is more doubtful after looking slightly off the pace last term.

He'll be keen to show he still has what it takes to play at this level should the new manager set them up well.

Spurs are desperate for reinforcements in defence after some pretty shambolic performances in 2020-21 that saw them surrender a 2-0 first leg lead against Dinamo Zagreb in the Europa League under Mourinho as they suffered a dismal 3-0 defeat in the second leg.

Sportsmail understands Tottenham are in talks with Atalanta to sign Argentina international Romero alongside discussions to snap up Gollini on loan, with the centre-back having just won the Copa America with his country.

Romero technically belongs to Juventus - but he has been playing with Atalanta for two years. The Italian side have the option to buy for around £14m - and the club are expected to sell him on for a profit.

If Spurs can pull off a deal, it might be one that's dragged on a bit longer due to the complicated conditions.

A favourite under Espirito Santo at Wolves, Doherty is likely to slot back into the team at right wing back.

The Irishman had looked somewhat frozen out at the club recently, with Serge Aurier the preferred man at right back under Mourinho, despite arriving from Wolves last summer and tipped to oust the Ivorian.

He started just 13 league games, grabbing two assists, but has already expressed his excitement about working with 'world class' Nuno again. And, with Aurier already declaring his time with Tottenham over, it's unlikely Spurs will be bringing in two new right backs.

Doherty is a player who knows the manager's system well and can thrive and become a dangerous attacking force if the team can adapt to it quickly.

Espirito Santo will not be without an array of midfield options to choose from when he starts mulling over his first team for the season opener against Man City. He'll have Harry Winks, Dele Alli and even Oliver Skipp to consider after his superb loan spell at Norwich.

Alli in particular will be keen to impress his new boss and revamp his career after his relationship with Mourinho turned sour, but since Espirito Santo is used to working with two talents like Joao Moutinho and Ruben Neves, he'll be looking for creativity and Lo Celso provides it.

Since his move from Real Betis, the Argentine hasn't quite grabbed games by the scruff of the neck but he would have more freedom to operate in a 3-4-3 as the chief midfield playmaker, with his partner able to sit deeper.

The French midfielder has been slowly growing into life at Spurs after an abysmal start that saw him ridiculed by Mourinho amid claims he looked unfit and not up to Premier League standard.

But last season we saw the former Lyon man back to something close to his best as he glided past opponents and showed off his silky movement.

Espirito Santo will need a defensive minded player to sit in midfield but also one who can drive forwards with the ball as a box to box man and go past people.

It looked like Spurs had pulled off a real coup last season when they pipped Chelsea and Manchester United to the signing of the former Real Madrid left-back - securing quality in a position they had looked shaky in for some time.

With Danny Rose and Ben Davies not providing the goods that Liverpool boasted with Andy Robertson or United possessed with Luke Shaw, Spurs invested well - even though the Spaniard showed some lapses in concentration at times.

He is still young and learning and - just like Doherty - could thrive in a slightly advanced role at wing back that would allow him to bomb forwards with the ball.

Not many English football fans will have heard of Gil - but he is highly regarded in Spain and Spurs are willing to spend £21m on him - as well as chucking in long-serving midfielder Erik Lamela to tempt Sevilla.

Sportsmail understands talks to bring Gil to north London are in the final stages after a breakout campaign on loan at Eibar last season. He wasn't able to prevent their relegation to Spain's second tier but certainly showed his class and has been handed four call-ups to the Spanish national team by Luis Enrique.

The 20-year-old, who can play on either flank, is far from guaranteed first team football but has plenty of admirers and will hope to convince Nuno of his ability should the deal go through.

The right wing position is firmly up for grabs, with Steven Bergwijn linked with a move to Ajax after a struggle to show his best ability - while Lucas Moura has been very hit-and-miss of late.

It's the big question all of us have on our minds. Will he or won't he? Kane has been carrying Tottenham on his back for many years and the club looked to be pulling in the same direction as him for a time - regularly in the top four and even reaching the Champions League final in 2019.

But with Spurs set for another season outside Europe's elite competition, and failing to win a trophy yet again, Kane is considering his options and has already informed the club of his desire to leave.

Leaving right now will be tricky for him, however. Daniel Levy is in the stronger position - his star striker still has three years left on his deal and he won't accept a bid of less than £150m for him.

Many clubs won't be able to afford that given the current financial climate, and Levy is already understood to have assured Espirito Santo that Kane is going nowhere.

It all rests on whether Kane is willing to wait another year to get his move or kick up a fuss to force a dramatic departure.

Whenever Kane is unavailable, the gleeful South Korean has always stepped up and has to be the club's second most valuable asset after Kane - although he too has inevitably been linked with an exit.

After returning to work on pre-season, Spurs have focused heavily on Son - who netted in the 3-0 friendly win over Colchester on Wednesday - in their promotional material for the start of the season and know he will be vital to the team's hopes next season whether Kane stays or not.

And despite reported interest from Bayern Munich, you can be sure Levy will block any transfer if he does strike an agreement to sell the England captain.