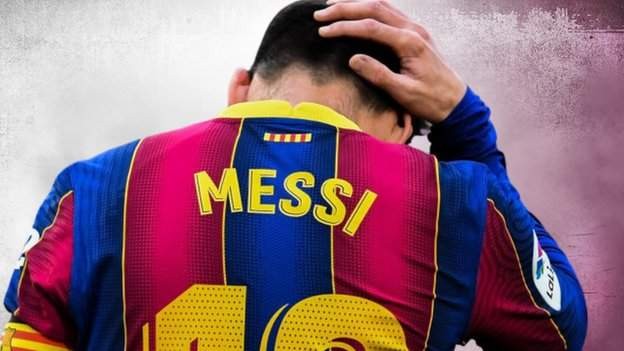 "Messi shall not be staying".

The statement, released by Barcelona just before 8pm Spanish time on Thursday, was unequivocal and shocked the world of football.

The 34-year-old Argentine, a free agent since 1 July, had been set to sign a new deal to extend his 21-year stay at the Nou Camp.

Barca said the contract was due to be signed on Thursday, but the Spanish league's "financial and structural obstacles" scuppered that.

So what now for the six-time Ballon d'Or winner? Is this really the end of Messi at Barca, or is there set to be one final twist?

Why did a new deal collapse?

Earlier this month, Spanish football writer Guillem Balague revealed Messi had agreed a deal until 2026 that included reducing his wages to half of his previous salary.

But Barca needed to sell players to fund the deal - reducing their wage bill by about 200m euros (£172m) to meet La Liga's Financial Fair Play (FFP) requirements - and are yet to achieve this. Antoine Griezmann, Ousmane Dembele and Philippe Coutinho - among others - remain on their books.

He told BBC World Service: "Many people are still trying to imagine how life will be after Messi because nobody had imagined this three days ago.

"In fact, we heard some voices in the club, even president Joan Laporta, saying that Messi would stay. There was already a contract there to be signed, a contract was already written.

"In their statement it seems that Barcelona and Messi agree - they are on the same side, instead it seems the financial situation of the club regulations of La Liga and the bottom line was not meeting the FFP regulations."

Is this a powerplay?

Stop writing the obituaries, shelve those plans for a grand farewell... as dramatic as it seems, Barca's announcement does not definitely mean Messi is leaving. Not yet, anyway.

In fact, rather than being a final and definitive statement it is actually a very risky tactical move in the club's powerplay with La Liga, whose salary cap regulations are preventing Messi and Barca from signing the new contract the club claim they have both agreed.

The backdrop is Barca's crippling financial situation and their connected ongoing desire to form a European Super League, which club president Joan Laporta has continued to pursue along with his Real Madrid counterpart Florentino Perez.

Crucially, La Liga has just announced a major new deal with investment fund CVC, which would immediately hand Barca about £200m - enough to re-sign Messi. To receive that, however, the club would have to sign a long-term commitment to La Liga, renouncing the idea of a Super League.

And minutes after Barca's statement, Real Madrid released their own, saying the CVC deal was done "without the involvement or knowledge" of the club and saying they cannot support the venture.

Laporta is saying to La Liga president Javier Tebas: 'Well, let's see what your new investment fund partner makes of a league without Messi. Your move.'

What that move will be... who knows? But this multi-billion-dollar game of chess is not over. Laporta has called 'check'. But it's not necessarily 'checkmate'.

Where could Messi end up?

It was just a year ago that Messi said he wanted to exercise a clause in his contract to leave on a free transfer, but Barca said a 700m euros (£624m) fee had to be paid.

Now there are no such restrictions.

He has long been linked with a reunion with former Barca boss Pep Guardiola at Manchester City.

But with City having signed Jack Grealish for a British record £100m, and being linked with a big-money move for Tottenham striker Harry Kane, Balague does not think the Premier League champions "have the financial viability to get Messi".

He told BBC Radio 5 Live: "It's not like getting someone who will earn, say, 50m euros. Whatever it is, you have to double it. But you also have to pay a signing-on fee, that could be 50-60-70m. It's a signing from another club almost."So from that point of view I don't think City have got the finances now, and we all suspect it has to be Paris St-Germain next."

The music that makes The Hundred: Check out the best new music from your teams regionCould a DNA test find you the perfect diet? How people are using the findings for nutrition advice