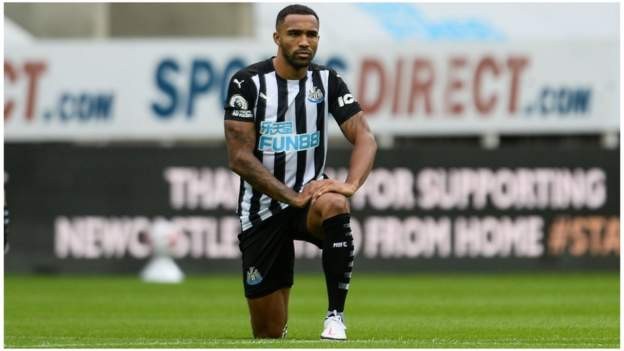 West Ham's Michail Antonio and Newcastle's Callum Wilson have backed the decision to stop taking the knee before every Premier League match.

Premier League captains decided to reduce the anti-racism gesture after consulting with players.

It will still take place before certain games, including the 26 December fixtures and cup finals, as well as the last matches of the 2022-23 campaign.

All teams took the knee on the opening weekend of the Premier League season.

"Doing it week-to-week, just because it's something we've been told to do, I think it's probably faded and lost its impact," said Newcastle forward Wilson on the latest episode of the Footballer's Football Podcast.

"It's definitely good that it's not getting completely stopped," said West Ham striker Antonio, "but it'll have more of an impact at big games."

There will also be dedicated No Room For Racism match rounds in October and March, but Wilson believes gestures within football can only make a limited change.

"I think it comes down to the government doing more, too," he said. "Everyone loves football. Football brings people together, but it can't just be us trying to make that change."

Antonio believes actions like taking the knee can help to educate young people.

"I wouldn't say we should completely stop it," he said. "It still has impact. As kids are going to games, they always say, 'why do they do that?' - I know for a fact that kids are asking the question. They're getting educated."

'City defeat was a masterclass' - Antonio

Both players discussed their opening games of the new season, too. Antonio was substituted in the second half as West Ham fell to a 2-0 defeat by an impressive Manchester City, with both goals scored by their new striker Erling Haaland.

"Their system is liquid," said Antonio. "It can't be contained. They're rotating everywhere. Cancelo is popping up in midfield, Grealish will be out wide, Bernardo will be inside him. It was a masterclass."

On Haaland, Antonio said: "You can definitely see the quality that he has. I do believe that he's going to be up there for the golden boot.

"I'm going to have to eat my words from last season, when I was saying I wasn't sure he would fit in with Pep Guardiola's system, because he's used to using number tens."

How can you save money on meat? Here are some helpful tips on reducing your spendWhy are some people still unvaccinated? Hannah Fry meets some of them to find out the reasons