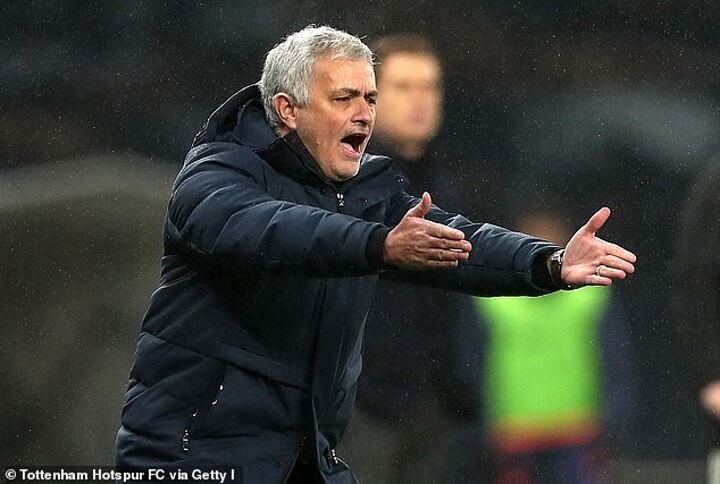 Jamie O'Hara has questioned Tottenham's fragile mentality after they dropped more points from a winning position in the draw against Fulham before insisting that Jose Mourinho's team are not good enough to hold on to slender leads.

The disappointing draw for Spurs means they failed to reclaim third place and go level on points with Liverpool after Harry Kane's first-half header was cancelled out by Ivan Cavaleiro in the 74th minute.

The result left a frustrated O'Hara questioning Mourinho's tactics against a relegation candidate, while the former Spurs midfielder claimed the Tottenham boss can't rely on his winning blueprint at Chelsea because the centre-backs he has now just don't compare.

'I don't think they're good enough at the back to hold on to 1-0 leads,' O'Hara told talkSPORT. 'I've always said this with Eric Dier, [Davinson] Sanchez or [Toby] Alderweireld – they're not John Terry, they're not [Ricardo] Carvalho.

'They're not the players that Mourinho has had. I think with the attacking prowess that we've got, you've got to go again. You've got to look to keep scoring.

'What's annoying me is that we're doing the same thing and expecting different results. All right, we're not losing, but the draws are killing us.

'We're coming out second half scrappy and I don't understand why we played [Moussa] Sissoko right midfield at home. He's been fantastic in midfield and I know [Harry] Winks has done well and warrants a start but you have to make tough decisions sometimes.'

Gareth Bale was left on the bench for Wednesday's draw against the Cottagers with questions being asked about his fitness issues.

But O'Hara was adamant the Welshman needs gametime to get back to full fitness quicker.

'He's never going to get fit if you don't play him,' O'Hara added.

'When I watch Bale, he is miles off it and looks like he's off the pace but he's still got a goal in him, he still has talent. He can still do something out of the ordinary.

'Then you've got [Erik] Lamela and Lucas Moura. So I just don't understand why we're playing this negative way. In the second half, we we're basically waiting for Fulham to attack.'

O'Hara was also left frustrated by how deep Kane was having to drop to receive the ball against Fulham, insisting the Spurs talisman should've been further up the pitch to be the team's main focal point in attack.

He added: 'I don't know what's happening at half-time or what mentality they've got to think they're good enough to hold on to 1-0 leads. We're not. You have to keep going and keep looking to press.

'I think one of the biggest problems is that Harry Kane is coming so deep to get the ball, there is no one else to stretch the other team.

'Son Heung-min is the only one who looks to run beyond and instead, they should tell Kane to stay up top, be in charge of their back two, deal with them, you be our focal point and we can still play into you.

'Then we can get up the pitch, then you can link and you're getting the ball in the final third instead of getting it in midfield, getting a few touches and playing a couple of nice passes but he's not hurting the team.'