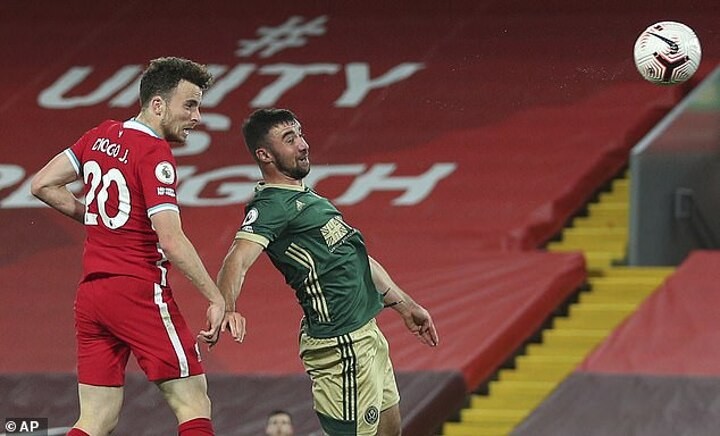 Patience. It is the word Jurgen Klopp tends to swiftly reach for in relation to new signings.

In a world of instant judgments, Liverpool's manager has made a habit of stepping back and not over-burdening new arrivals.

Look back at some of the men he has bought since he has been at Anfield. Andrew Robertson made his 100th Premier League appearance for Klopp on Saturday night but this time three years ago, he was knocking on his manager's door and asking what he could do to get into his team.

Robertson had found it difficult initially to acclimatise to Klopp's way of working. He was not alone.

With that in mind, it makes the impact of Diogo Jota all the more breathtaking. Perhaps some will argue that a £41m transfer fee means the least he should be doing is making big contributions, but few had such grand expectations when he arrived.

How was he going to shine when Sadio Mane, Mohamed Salah and Roberto Firmino, Klopp's first-choice trident, held sway? The idea that Jota is just an excellent back-up has been swiftly altered in his impressive first month.

A winning goal against Sheffield United — plundered powerfully with his head at the back post — reinforced the positive impression he has made and left Klopp purring about what the future might hold for him.

'I'm not sure it was a surprise,' said Klopp. 'But he's still adapting; a lot of things we do at the moment are not natural to him but that's only because Wolves play differently. A lot of things he did for Wolves are exactly what we want him to do.

'We will need his quality and I'm really happy that he settled nicely so far. He is a good player and that is why we signed him. It is easy to like him as a person. As a player, he is quick, he has the physicality. He is strong, good in the air, good on the ground and that is the quality we need.

'Diogo scored a super goal and was involved but he can be much better and that is good news.'

Liverpool can be much better, too. They huffed and puffed at times in the face of United's stubbornness, particularly for a large chunk of the first period when they trailed to Sander Berge's penalty and seemed to be aching for the stadium to be full once again.

One thing Liverpool are, though, is bloody-minded and they chiselled out a victory, after Firmino equalised and Jota pounced, that could be significant for the rest of the season.

Had Anfield been packed out, you could have envisaged Klopp racing to the Kop at the final whistle to punch and roar his delight.

Whichever team is crowned champions will be the one who display the most courage and tenacity and keep plugging on through the attrition of a demanding campaign. The onus on mentality cannot be overstated.

'I'm not interested in whether there are questions about us, to be honest,' said Liverpool captain Jordan Henderson.

'I am just interested in the mentality in our changing room and I see the hunger, desire every day to improve, to want to win games and you saw that against Sheffield United — the resilience and character to dig in and keep going, especially if you are not playing at the level you might be normally.

'We know we can be better, but we showed another side of us: where we can dig in and see results out.'

Had Liverpool lost at home to the Blades for the first time since April 1994, the doubts of critics, who believe their task of retaining the title has been dramatically hindered by Virgil van Dijk's absence, would have grown.

But they dug in to join Everton at the top of the Premier League and the feeling that accompanied this win was not dissimilar to the one that followed a 2-1 triumph over Leicester last October.

Then Liverpool opened up a six-point gap over Manchester City and never looked back.

Five is the current buffer to Pep Guardiola's side and, even though City have a game in hand, such an advantage may prove critical as they head into the winter, when there will be no respite.

'We had to dig deep and the boys did, that is important,' said Klopp. 'It's nice to win a football game 3-0 and stroll through it.

'But that only happens when you are ready in games like this to fight hard. On nights like this you earn the right to win the other games.

'That is why I love this game so much. I'm really happy about the result. We gave it all that we had.'

So did Sheffield United. Many will look at the table and fear that last season's impressive exploits, when they came within touching distance of a place in Europe, will prove a mirage.

But this performance did not give the impression of a team facing a period of discontent.

'It is ruthless and cruel this division and it is hard one to take,' said boss Chris Wilder.

'We're not feeling sorry for ourselves, there are no white flags going up. No way.'