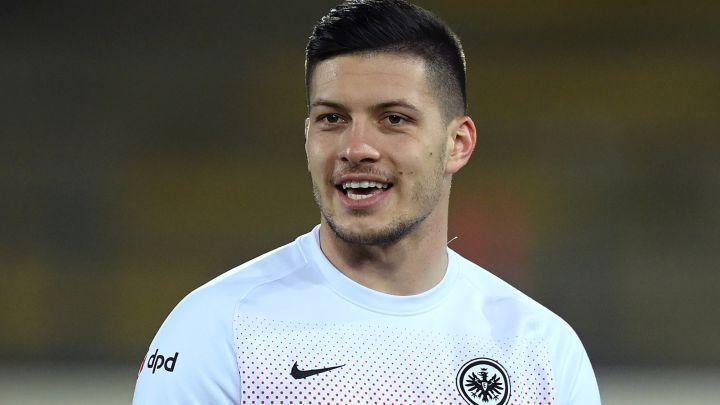 "There were rumors in the summer, but Madrid stopped everything. Now I am happy that my wish has been fulfilled and I have been able to return," said the Real Madrid loanee.

Luka Jovic has gotten off the ground running since his return to Eintracht Frankfurt on loan from Real Madrid.

The Serbian striker has already netted three goals in three games, more than the two goals he managed in his season and half at the Bernabéu.

Jovic gave his first conference since his return to Germany, in which he discussed his difficult but valuable experience at Real Madrid, his joy at returning to Frankfurt and the coaches of both clubs, Zinedine Zidane and Adi Hütter.

Return to Frankfurt: "I am very happy to be back. I feel very comfortable and that is being seen on the pitch. I scored two goals during all my time at Real Madrid and now I have three here. The city, the club and above all the team suit me perfectly.”

Confidence: "I had bad luck at Real Madrid. The injuries diminished me and in the private sphere it was not good at all. I feel fortunate to have been able to return to Frankfurt, where I have received a wonderful reception.”

Experience at Real Madrid: "I have been fortunate to have been able to train daily with the best players in the world. I have gained in experience and I consider myself a better player today. Despite not having been able to have continuity on the pitch , I take many positives from Madrid.”

Frankfurt squad: "I was pleasantly surprised, the team is even better than the one I left. I wouldn’t single out anyone in particular, but in general I consider the team at a very good level."

Life in Frankfurt: "I am still in the hotel, it is not easy to find an apartment in so few months. As for the rest, it hasn’t changed much. The city remains the same. It hasn’t been difficult for me to integrate."

Comparing Zidane and Hütter: "I don't want to go into details, they are both phenomenal coaches. Zidane is also very good on a personal level, but it is easier for me to communicate with Adi in English since I am not fluent in Spanish to be able to converse fluently with Zidane These kinds of details make it easier for me.”

Jovic: It’s never easy at a club like Real Madrid

Ownership: "I still need time to adapt to one hundred percent. I continue to drag some muscular discomfort, but I trust that that will lessen as time goes by and that the coach will be able to count on me soon from the start of the matches.”

The right step: "I know the importance of the club for the city and the entire region. For this reason, I was convinced of this step and the players also communicate that to me on a daily basis. We can do great things."

Problems at Madrid: "I think it had to do with the short time I was able to play. It is never easy at a team like Real Madrid, where the style is different and the pressure is always very high. That is why it was best to take the step back to Frankfurt.”

Return to Madrid: "I don't want to look to the future. I'm focused on Eintracht and on being able to be one hundred percent again to play 90 minutes. I don't have to prove anything to anyone. I know that I'm a good player.”

Spanish classes: "I’m not taking classes. I started learning the language in Madrid, but now I'm not taking any more classes."

Negotiations with Eintracht: "There were rumors in the summer, but Madrid stopped everything. Now I am happy that my wish has been fulfilled and I have been able to return."

Objectives with Eintracht: "I have not set an exact number of goals that I want to score with Eintracht. I am sure that, if we continue playing as we did in the last few matches, we will have chances to qualify for the Champions League."

Partnership with André Silva: "It is too early to talk about it. The longer we can play together, the more we will combine. He is a good guy and we will surely work together on the pitch."