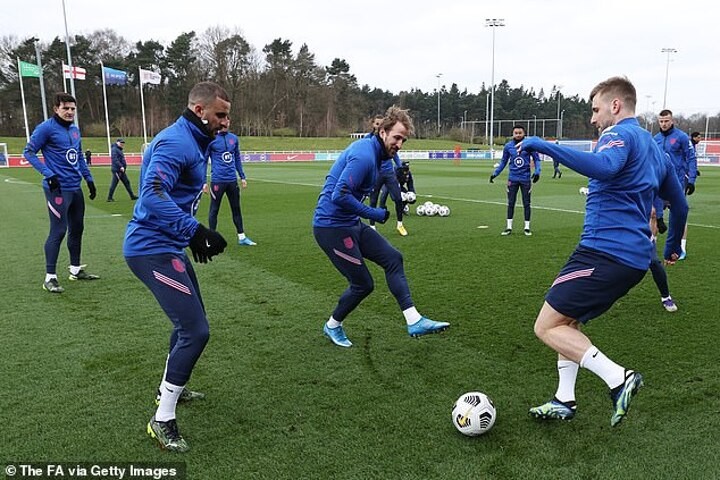 Unlike France, Germany, Italy and Portugal, Gareth Southgate opted not to use any of the Chelsea or Manchester City players who appeared in last month's Champions League final in either of England's warm-up matches against Austria and Romania. He felt it was more important that they had time to rest.

Even if he was without some of his star names, what Southgate learned from facing Romania was how the back four is not working right now.

England's opponents, who did not even qualify for Euro 2020, created a worrying number of chances and Sam Johnstone was called into making several good saves.

The back four were getting pulled out of position and the Romanians were finding space between the full backs and centre backs. Better opponents would punish that.

Without Harry Maguire, who has now returned to training but is set to miss this opening game, a back three may be the best option for kicking off this tournament.

England may even end up fielding four full backs against Croatia: two in the back three — Kyle Walker on the right and Luke Shaw on the left — then two more in the wing-back positions in Reece James and Ben Chilwell after their Champions League exploits.

That would be reminiscent of Euro 96, when Terry Venables started right back Gary Neville and left back Stuart Pearce on either side of Tony Adams against Scotland. Sitting in front of the back three against the Scots that day was Southgate, so it is an idea he is very familiar with.

When England faced Croatia in the 2018 World Cup semi-finals, Southgate's side were run ragged in the wide positions. He fielded a 3-1-4-2 formation and the wing-backs —Kieran Trippier on the right and Ashley Young on the left — were given too much to do.

Young, the eldest England player at 33 years old that day, lasted 90 minutes before he needed replacing. Then Trippier picked up a groin problem in extra-time.

England were exposed in those areas and Southgate cannot allow that to happen again.

Using a front three on Sunday, instead of the front two he used in 2018, would help lighten the load for the wing backs.

If it is a 3-4-3 that Southgate starts, then Declan Rice and Mason Mount can be a solid partnership in midfield.

Mount made the 18th-most tackles in the Premier League last season and committed the seventh most fouls (while only being yellow-carded twice).

He is tenacious but he's creative, too, as he showed in the Champions League final with that defence-splitting pass for Kai Havertz's winner.

Mount is an all-purpose player and he can complement Rice in midfield. It's in attack where England have a real embarrassment of riches.

Harry Kane starts as striker, but then there are six players fighting for two places on either side of him. Jadon Sancho, Phil Foden and Bukayo Saka want the right wing. Raheem Sterling, Jack Grealish and Marcus Rashford want the left.

Whoever starts needs to get up in support of Kane, but also work hard when England don't have the ball.

Since their last tournament, Croatia have lost several big names to retirement, such as Mario Mandzukic, Ivan Rakitic and Danijel Subasic.

But they are still led by Luka Modric and they remain a side who like to control games.

A lot of that control comes through Marcelo Brozovic. The Inter Milan midfielder sits deep in Zlatko Dalic's 4-3-3 set-up, with Modric and Mateo Kovacic on either side of him.

Brozovic will drop to receive the ball from his defence but if he is being marked, Modric and Kovacic are more than happy to receive it in tight situations. Croatia are efficient with the ball — everything is one-touch, two-touch — and midfield is their strongest area.

There is strength in depth there, with the athletic Nikola Vlasic another who is impressing and can be introduced from the substitutes' bench.

On Croatia's right wing is Ante Rebic and on the left is Ivan Perisic.

Nobody covered more distance at the 2018 World Cup than Perisic, who completed almost two marathons throughout that tournament.

These wide men for Croatia will drop to help out defensively but they'll break forward at pace. They're very direct with the ball and they'll be playing off Bruno Petkovic.

The 6ft 4in striker is a focal point for this team, like Mandzukic was in 2018.

Petkovic isn't the most prolific — he averages a goal every three games for Dinamo Zagreb — but then Mandzukic only scored three times en route to Croatia reaching the World Cup final three years ago.

What he was doing in the build-up was just as important, and Dalic has praised Petkovic for what he brings to the team.

The first game of any competition brings nerves. Croatia are a solid side, but England have enough to make this a winning start.