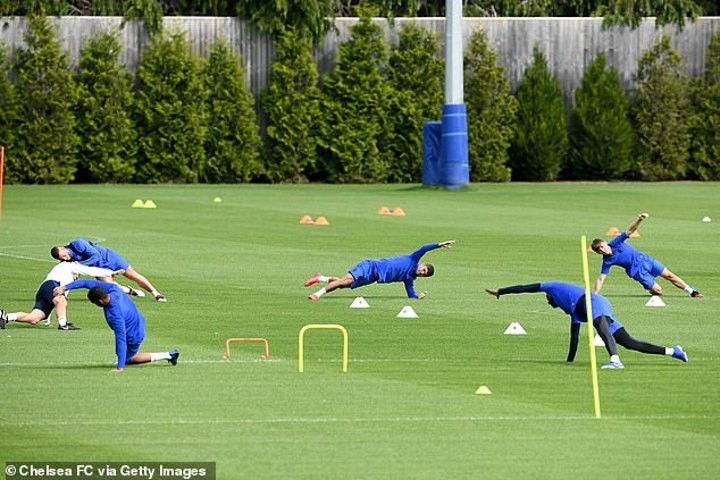 Chelsea boss Frank Lampard admitted that 'safety has to come first' for players and staff in the lead up to resuming the Premier League season.

Despite being pleased to have players returning to the training ground in Phase One of Project Restart, Lampard accepted that it was not going to be a quick fix for clubs to emerge from the hiatus caused by the coronavirus pandemic.

Sportsmail exclusively revealed last week that N'Golo Kante opted out of training on Wednesday over safety fears and while there is an appetite to see games return and the season concluded, Lampard said safety beats everything else.

'It's been really good to get some work into the players,' he said, in an interview with BBC's Football Focus.

'It mean it is individual work, we can't quite get enough hands on around them because we have to tow the line but it is about seeing how things go. Safety has to come first. Once we get over Phase One, see what Phase Two looks like and beyond that, then we can think about getting the games back, albeit behind-closed-doors.'

'All of us here we want to do it, it's our job, we are very fortunate to have this job, to play football, and we want to finish it,' he added.

'The feeling that you might be involved in a relegation battle or towards the top of the league, I think that is probably... we all felt that when we finished, we were so into it. But we have seen munch more important things in the country and the world than football happen and I think that has been a bit of a reset for all of us.

'What remains is we want to play football and what remains of this season, but as you say the most important thing is when it is safe and healthy for players and staff. Fans won't be coming but will it change things for society with the police and the NHS? All these things need to come together and hopefully we can get our game back.'