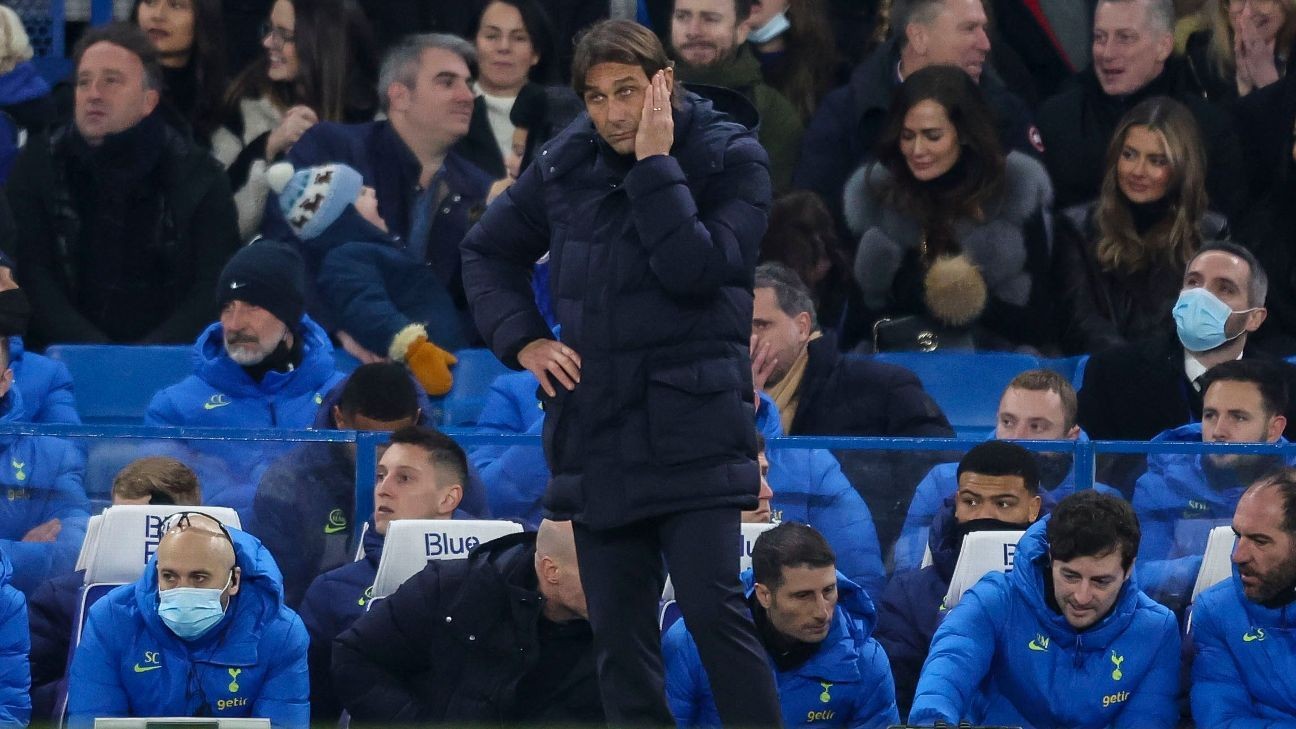 LONDON -- Losing to Chelsea for a third time this month won't do much for Antonio Conte's mission of eradicating Tottenham's inferiority complex, but it might just strengthen his argument to act in the final week of the January transfer window. Following on from defeats in both legs of their Carabao Cup semifinal, Spurs were beaten 2-0 on Sunday to extend an appalling record at Stamford Bridge to just one win from their last 37 visits across all competitions.

Blues boss Thomas Tuchel gave his faltering players two days off earlier this week in a search for a spark to reignite performances, but it turns out all they really needed was to play Tottenham. (It was also Chelsea's 33rd Premier League victory over Tottenham, their most against any team in the competition's history.) Meanwhile Conte was left to speak once again about the gap between these two sides after a game in which he set his team up in a 4-4-2 shape, with Steven Bergwijn and Harry Kane up front, Son Heung-Min missing through injury and Dele Alli and Giovani Lo Celso omitted, the latter as he searches for a move away from the club.

"The club knows very well what I think and the time we need to close this gap," he said. "There is not [just] one transfer market [required] to close the gap. In the last few years, this gap became very, very big and now it is not simple to find the solution in a short time."

But that work starts now. The sight of full-backs Matt Doherty and Ryan Sessegnon operating as conventional wingers in midfield perhaps conveys the urgency with which Spurs need to modify their squad in the coming week. Tottenham continue to pursue a deal for Wolves' Adama Traore while also eyeing up a more complicated move for AC Milan midfielder Franck Kessie, among several other options.

It promises to be a busy few days, but Sunday's defeat was a reminder of what failure could look like. Either Traore or Kessie would have added a fresh dimension to a team that at least competed better than on their previous visit here, but never looked like finding a way back after Hakim Ziyech opened the scoring with a sublime curling 47th-minute strike. The Moroccan did not celebrate his goal against Brighton five days earlier, but before he could react this time, he was mobbed by teammates wanting to share in a moment of sheer class that turned the game irrevocably in the home side's favour.

Conte was frustrated by the latest Tottenham loss to Chelsea, and it remains to be seen whether he'll get the reinforcements needed to stay in the hunt for a top-four finish. Robin Jones/Getty Images

Aside from the break, a tactical adjustment to a 4-1-4-1 formation seemed to help Ziyech and Callum Hudson-Odoi threaten more, even if this was another occasion on which Romelu Lukaku's efficiency in front of goal evaded him.

"We thought maybe it could give us some solutions to escape the high pressing with the game in the opponent's half and have a bit more width without having wing-backs," said Tuchel. "It was one of his [Ziyech's] best matches today because he was very reliable. To be fair, it is maybe also his best position, to be on the wing, to have the wide position on the right. That position does not normally exist in that particular manner when we play our 3-4-3 and it is more a wing-back. It was good because it gave him the opportunity to take risks."

Spurs did have reason to feel aggrieved; Kane had the ball in the net just before the interval, but a push in Thiago Silva's back gave him extra space to complete his finish and despite the England captain's protestations, the VAR did not intervene following referee Paul Tierney's decision to rule it out. Conte was incensed.

"The referee disallowed a goal and I was very clear with him," he said. "I think it is best to tell the referee in a polite way, to see this type of goal disallowed it was incredible."

Silva was clever in maximising the contact, and he dealt Spurs a further blow on 55 minutes when heading home Mason Mount's free-kick. The trend of Tottenham conceding from set-pieces will infuriate Conte further; they've allowed six goals from dead-ball situations in the Premier League this season. No team above them has suffered more.

Sunday was Conte's first league defeat since being appointed Spurs boss in November, and such is the extent to which they are playing catch-up in the second half the campaign, Spurs still have two games in hand on Manchester United in fourth place and a staggering four matches to make up compared to their opponents this weekend. They are just two points behind United, but to maximise on those extra matches, Conte needs the club to back him with decisive transfer business over the next eight days. Managing director of football, Fabio Paratici, was at Stamford Bridge before kick-off -- on his phone, of course -- to witness first-hand the latest instalment in a rivalry which has had one team in the ascendancy for so long.

Victory ensures Chelsea keep a distance between the top three and the scramble taking place below them ahead of an inviting post-Club World Cup run of league fixtures including dates with Crystal Palace, Burley, Newcastle, Norwich and Brentford. Sadly for them, they probably won't face Spurs again this season.

"Can we play you every week?" sang the jubilant home supporters. Conte needs help to change the tune.