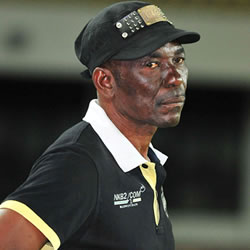 Liberty Professionals coach J.E Sarpong has identified Michael Helegbe is a major threat Â for Asante Kotoko when both sides meet in the league this weekend.

The former Liberty captain crossed carpets to join the Porcupine Warriors during the January transfer window and will now come up against his former side on Sunday.

But Sarpong says the pressure will be on the ex national U-23 captain as he attempts to prove his worth to the Kotoko faithfuls.

"We will not allow him (Helegbe) to operate because we know him very well," Sarpong said.

"The pressure is on Helegbe to convince his people that he is a good buy.

"But Liberty is not in such position, we are playing big challengers so there is no pressure at all.

Liberty aims to avenge a 2-1 defeat suffered against Kotoko in the first round but Sarpong is keeping his targets modest.

"We will fight to ensure that at least we come away with a point," he added.