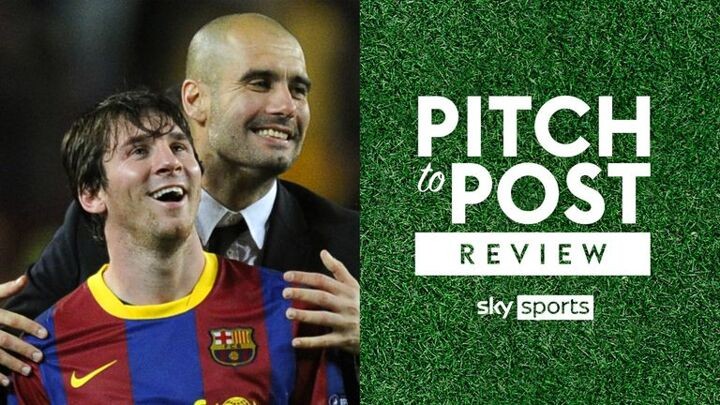 Talk of Lionel Messi's future will ramp up in the coming months as he approaches the end of his Barcelona contract, but does a move to Man City make sense? The Pitch to Post Review show panel discuss.

Spokespeople for both Man City and Messi have confirmed to Sky Sports News no offers have been made by City to the player, neither last summer nor since, contrary to reports in a British newspaper on Friday a £430m contract offer was to be made.

Messi's spokesperson has also reiterated the Argentina forward will choose whether to leave or stay at the end of the season, having announced his intention to do so in an interview in December.

Messi has resettled at the Nou Camp this season since demanding to be released from his contract last summer, when Pep Guardiola and City were considered the frontrunners to sign him.

Having entered into the last six months of his current deal, Messi is keen to find out the result of next month's presidential election and what the winner will offer to him both in financial and sporting incentives, before making a call on the next step in his career.

Jasper Taylor was joined by skysports.com's Ben Grounds and Nick Wright to discuss whether the move makes sense, or whether the money could be better spent elsewhere...

Sky Sports' Nick Wright on the Pitch to Post Review:

"There are many things to consider and I think the first is that Lionel Messi remains the best player in the world at 33, there is little or no evidence that he is on the decline. Elite players like Cristiano Ronaldo and Zlatan Ibrahimovic are prolonging their careers at the moment, and Messi has everything around him to keep going. He has everything in his power to sustain his output for a long time.

"Another thing to remember is that Manchester City's owners have near-limitless wealth, so they are capable of doing this deal. Is it good business? I would hate to be the guy arguing against signing Lionel Messi because he would make them better, of course he would.

"There is also the status-factor, which would be appealing to the owners. They already have the best manager in the world, so having the best player in the world I am sure is something they would be keen on.

"Messi played some of his best football for Barcelona under Guardiola, they have a pre-existing relationship and an understanding, and I am sure he will have a good idea of how he would intend to use him.

"I think all the ingredients are there for it to make sense: obviously the financials are eye-watering. It is an enormous amount of money. But this is Messi we are talking about. I hope it happens, because it would just be incredible to see him in the Premier League.

"The owners want to turn City into the biggest club in the world, to win Champions Leagues and make it the most marketable club in the world. Signing the best player in the world, as well as having Guardiola as manager, that's exactly the sort of thing they are aiming for. If they can find a way to finance the deal, let's do it, let's go for it. I hope it happens."

Haaland or Mbappe a better use of money?

Sky Sports' Ben Grounds on the Pitch to Post Review:

"You have got this Manchester City juggernaut that has clicked back into gear since late November. There was talk even last season about whether that was it for Pep - could he rebuild City again?

"We have seen how Phil Foden has kicked on, and they signed Ferran Torres - and their signings are pointing more towards long-term thinking. This Messi deal would be a little bit different, but it's an opportunity. He's coming to the end of his Barcelona contract, has that relationship with Pep Guardiola.

"Even if he is turning 34 in June, this is Lionel Messi. He's different. He will be at the top of his game for at least a couple years to come.

"Yes, it is a bit of a vanity project, but the owners have always wanted that marquee signing to back up their credibility. That's what it would be.

"But there are two other key players out there I think would be a better use of their money - Erling Haaland or Kylian Mbappe. I would rather see City go for them.

"Would Messi help Foden? I would be keen to see whether it disrupts him or improves him. If he did come in, I would be intrigued to see where he fits in. Does he play down the middle as a replacement for Sergio Aguero? What impact will that have on Gabriel Jesus?

"You do also wonder whether the intensity levels, the energy we see in the Premier League, will have an impact. That's what all players say when they move from Spain to England - that the physicality and intensity is higher."

Where could Messi fit in? Everywhere!

Sky Sports' Nick Wright on the Pitch to Post Review:

"It would be dangerous to second-guess Pep Guardiola's thinking, anyone with a Fantasy Football team can testify. Against Arsenal they were so fluid in the final third, with two or three players popping up in different positions, particularly in that false nine position at different times.

"I think Guardiola would see Messi as someone who gives him options; he used him famously as a false nine at Barcelona, he could use him from the flanks, he could play as a No 10, and could even play even deeper than that. He is still scoring at an extraordinary rate, but he has got more and more creative in recent years, with 21 assists in La Liga last season. Messi has had to drop further back as Barcelona's midfield becomes less influential.

"Pep could basically do what he likes with him - there are so many areas he could play and fit in. It's just a thrilling prospect.

"There is a question mark as to whether Messi would contribute defensively, if he is walking around the pitch, but he tends to be conserving energy and walking around when his team are in possession rather than out of it. I think he is more than capable of getting involved in the defensive side of the game.

"I think there are a lot of reasons this makes sense to City and Guardiola in a playing sense."