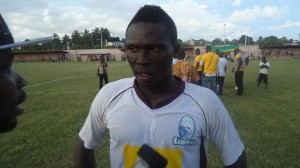 Heart of Lions top marksman Gilbert Fiamenyo is relishing the opportunity to join Hearts of Oak during the mid-season transfer.

The Ghana Under-23 forward was on the verge of joining the 'Phobians' two seasons ago but the move was blocked over disagreements on his transfer fee.

Hearts have aimed at fortifying their striking force have announced that they have the funds available.

Fiamenyo says if Hearts are able to meet his asking price, he would not hesitate to join the 20-time champions.

"Hearts of Oak is a club I played before coming to Lions. I like the club but it was unfortunate that something didn't go well. If they come forward this time around, I am ready to go if Lions will allow me to join them," he told Accra-based Pravda FM.

Fiamenyoh has scored five times this season for Lions.