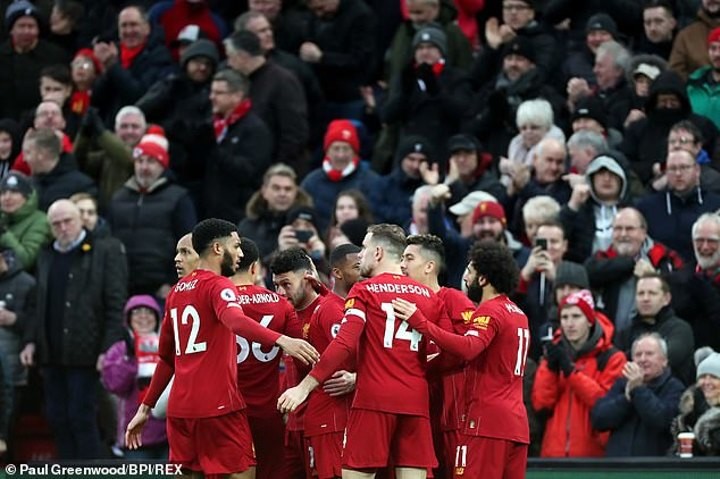 Liverpool believe that plans to place their staff on the government's furlough scheme were leaked by a Premier League rival, according to The Athletic.

The club announced earlier on Tuesday that they had reversed their decision to accept government funding after announcing on Saturday that they intended to take advantage of the Coronavirus Job retention scheme introduced by Chancellor Rishi Sunak, with more than half of their non-playing staff being furloughed.

It was a decision that attracted ferocious criticism from Piers Morgan and former players such as Jamie Carragher, before the reversal was announced by Liverpool chief executive Peter Moore, who admitted that they 'came to the wrong conclusion.'

However, a report in The Athletic claims that the Anfield hierarchy believe that details were leaked by another Premier League club.

Liverpool had held what they believed to be confidential discussions involving top-flight sides about how they intended to handle the effects of the pandemic.

But after the news broke on Saturday, the report states that principal owner John W Henry, chairman Tom Werner and FSG president Mike Gordon were 'shocked' by the deluge of criticism that came their way and were unhappy with what they regard as unfair accusations of greed.

It was then decided during a series of conference calls on Monday that back-tracking was the best solution to limiting the damage caused by the fallout to their initial decision.

Liverpool will therefore no longer seek taxpayers' money to cover 80 per cent of the wages of staff - who would have been claiming about £500,000 per month - who are currently unable to work with no matches.

In an open letter to supporters on the club's official website annoucing their reversal of the decision, Moore wrote: 'Allowing for perspective in these unprecedented and harrowing times, it is important to address an issue we, as an organisation, have been involved in since the weekend.

'We have consulted with a range of key stakeholders as part of a process aimed at achieving the best possible outcome for all concerned.

'It is as a direct result of this extensive consultation – and our own internal deliberations at various levels throughout the Club – that we have opted to find alternative means despite our eligibility to apply for the Coronavirus Job Retention Scheme.

Despite reversing their decision, Morgan believes Liverpool have done their reputation irreparable reputation.

'Liverpool Football club built up such a good reputation in recent years under Jurgen Klopp, and winning the Champions League, this dynamic wonderful team, everyone was proud, everyone loved what Liverpool were standing for,' he said on Good Morning Britain.

'All gone, all gone, because their billionaire owners in America decided that this was the time in a year when they made £45m profit that they were going to furlough their staff at Liverpool Football Club.

'They were going to get the British taxpayer to pay 80 per cent of the salaries of Liverpool staff. This is when they're paying players millions a year, £5m-10m a year for some of those players, this is when they're making tens of millions of pounds in gate receipts, in fees for winning the Champions League.

'What an astonishingly stupid decision from Liverpool Football Club. We've seen the same thing happening at Newcastle under Mike Ashley, no surprise, the man who tried to fleece all his customers.'