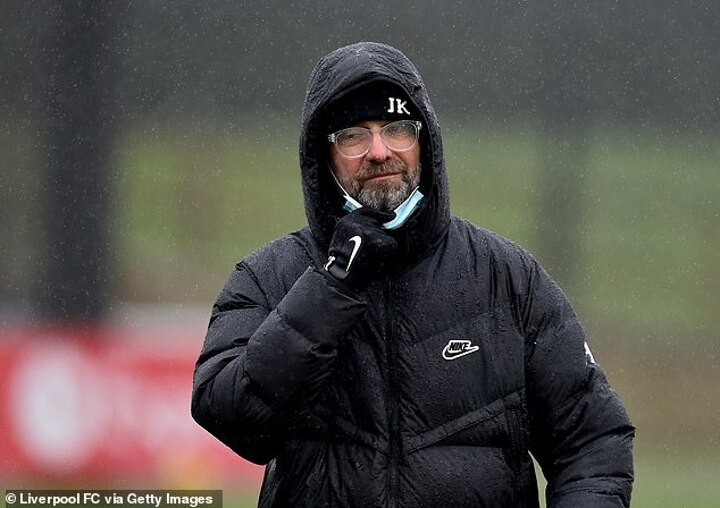 Jurgen Klopp is a relentless optimist but even the Liverpool manager may allow himself a shudder of doubt at the brutal 10 games coming his way.

Including Sunday's top-of-the-table Premier League showdown against fierce rivals Manchester United, there are just 34 days for those fixtures.

The Reds have slipped up in recent weeks, draws against West Brom and Newcastle was followed by a defeat by Southampton so they head into a mad month with nagging concerns.

It really is a make-or-break period for the champions and the United clash could set the tone this weekend.

Ole Gunnar Solskjaer's side are riding the crest of a wave, and on paper, playing Liverpool at the perfect time, with an opportunity to land a hammer blow in the title race and put the Reds on the canvas before they meet other heavy-hitters.

Klopp's men trail by three points but if they suffer a shock defeat at home, which they haven't done for three-and-a-half years, then the six point gap and mental blow would be savage.

But this Liverpool team have been touted as mentality monsters and will have one game in between their second clash with United, this time at Old Trafford in the FA Cup on January 23. They are four games unbeaten against the Red Devils, who will feel a first win since August 2018 is overdue.

That fixture is a meeting with Burnley at Anfield, one they are expected to win but given recent displays against weaker opposition it no longer feels like a guarantee.

After the FA Cup fourth-round visit to United, Liverpool will have five days to recover and get themselves up for a trip to Tottenham.

Jose Mourinho will still be seething at the manner in which Spurs fluffed their lines at Anfield, conceding a last-gasp set-piece goal by Roberto Firmino back in December.

And the north Londoners will be spoiling for revenge, maybe even entering that game as slight favourites.

A three-day turnaround sees Liverpool back in the capital once more, this time to face David Moyes' West Ham, who are no longer the pushovers they once were and have already held Manchester City to a draw at home this season.

That said, Liverpool are nine games unbeaten against the Hammers and have not lost to them for five years.

Then comes what should be some respite for Klopp's side, a home game against Brighton. They haven't lost to the Seagulls since 1984 and there could also be a boost in the shape of Diogo Jota's return from injury as he is expected to back in early to mid February.

That would be a hugely welcome sight for the champions. Jota was on brilliant form before sustaining a knee injury against Midtjylland in the Champions League dead rubber.

Surgery was not required but two months out only heaped pain on an already depleted side.

Liverpool arguably do not possess the same strength in depth as their title rivals. With Virgil van Dijk and Joe Gomez out for the long haul, the strain on other players eventually began to tell.

Jamie Carragher believes Van Dijk's absence will cost the Reds 10-12 points over the course of the season and the fact that Jordan Henderson and Fabinho have been used at the back removes key men from the midfield.

These factors become even more of an issue when the games come thick and fast.

After Brighton, Liverpool have only three days to prepare to host Manchester City. The reverse fixture finished 1-1 and featured some breathtaking football, particularly in the first half.

Pep Guardiola's side seem to have found their groove in recent weeks, going eight games unbeaten and will fancy their chances at a crowdless Anfield.

Mercifully, after that game, Liverpool have a week before they have to play again but the Leicester clash on February 13 is hardly a gimme.

Last season it was the Boxing Day demolition of the Foxes (4-0) that really sent out a message and the title race was all but over.

This term, a meeting with old manager's Brendan Rodgers' side will take on a different context.

But again, Liverpool will hardly have time to catch their breath. Three days later they will jet off to Germany for a Champions League last-16 first leg against RB Leipzig.

The six-time European champions are expected to progress but it could be seen as a banana skin, certainly one that Tottenham slipped up on last season and Man United in the group stage before Christmas.

And finally, the 10th game of a manic 34 days is none other than the Merseyside derby at Anfield.

The first encounter was a hot-blooded affair that changed the course of Liverpool's season.

Virgil van Dijk's injury from the horror tackle from Jordan Pickford, Thiago Alcantara ruled out until this year by Richarlison's equally terrible challenge and a late winner controversially ruled out for offside.

Klopp's Liverpool have justified their 'mentality monsters' tag time and again over the last two years. They'll need that unflinching grit more than ever over the next 10 games.

They can take solace from the fact that their combined unbeaten run against those opponents is 70 matches.

Defeat last July by Manchester City, which came after Liverpool had won the title, is the only one in more than two years against the teams they'll face up until February 20.

The champions will have their work cut out but we'll soon find out if they have the mettle to reach the other side with their title defence in tact.