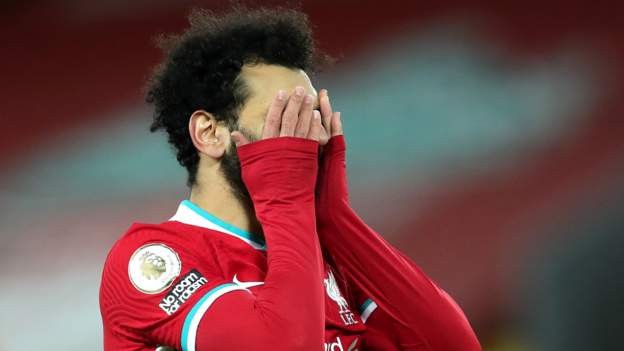 Liverpool's 68-game unbeaten run at home in the Premier League came to an end as Ashley Barnes fired home a late winner from the penalty spot to secure a famous victory for Burnley.

Barnes was tripped in the box by goalkeeper Alisson with seven minutes remaining and converted the resulting penalty to earn all the points.

Liverpool's last league loss at Anfield came nearly four years ago against Crystal Palace, and they are now six points behind leaders Manchester United at the midway point in the campaign.

Divock Origi was given his first start of the season and should have scored when he ran free on goal after pouncing on Ben Mee's error but struck the crossbar.

The hosts pushed to find the net in the second half but ran out of ideas, Nick Pope making a stunning save to deny Mohamed Salah and fellow substitute Roberto Firmino flicking an effort wide.

Burnley's shock win lifts them up to 16th in the table, seven points clear of the relegation zone.

Reds out of form

Liverpool manager Jurgen Klopp said before the game he was "not worried" by his side's poor form, but the latest setback means this has now turned into a real problem.

After 19 games, Liverpool are out of form and out of confidence, failing to find the net in their last 440 minutes of top-flight action and awaiting their first victory of 2021.

They looked to be hitting their stride on 19 December when they took apart Crystal Palace 7-0, but have not won since and have scored just a solitary goal in that time, against relegation strugglers West Brom.

Their drop off at this same stage from last season is extraordinary - after 19 games last term the Reds were 13 points clear at the top with 55 points, but they have 21 fewer points now.

Aside from Pope's save to thwart Salah and stops from Origi and Trent Alexander-Arnold, Liverpool did not look a side who were threatening to find the net.

They had 72% possession but much of it was slow and ponderous, and although they had spaces out wide and put 30 crosses into the box, the resolute Burnley defenders headed and hacked clear every ball that came in.

Attempt blocked. Takumi Minamino (Liverpool) left footed shot from the centre of the box is blocked.

Attempt missed. Dwight McNeil (Burnley) left footed shot from the left side of the box is close, but misses the top left corner. Assisted by Ashley Barnes.

Attempt blocked. Roberto Firmino (Liverpool) right footed shot from the centre of the box is blocked. Assisted by Trent Alexander-Arnold.

Attempt missed. Trent Alexander-Arnold (Liverpool) right footed shot from the right side of the box misses to the left. Assisted by Sadio Mané with a cross.

Attempt blocked. Mohamed Salah (Liverpool) left footed shot from the right side of the box is blocked. Assisted by Sadio Mané.

Penalty conceded by Alisson (Liverpool) after a foul in the penalty area.

Attempt blocked. Sadio Mané (Liverpool) right footed shot from the left side of the box is blocked. Assisted by Andrew Robertson.

You can stream five fifth-round games live on the BBC this weekend, including Liverpool's trip to Manchester United. Find out more here.