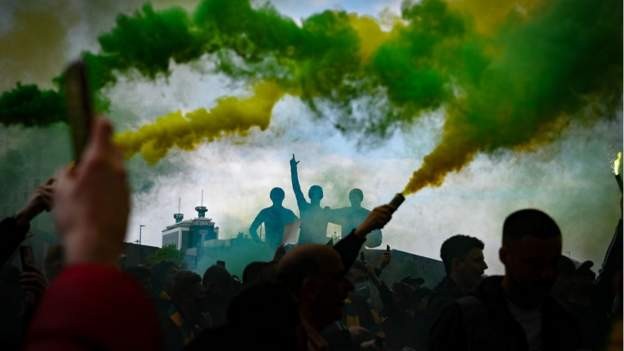 Manchester United's efforts to secure a lucrative new training kit deal have suffered a setback after a local firm withdrew over concerns it could be boycotted by fans protesting at the club's owners.

Talks have been taking place about finding a replacement. But it is understood one of the front-runners, The Hut Group (THG), has pulled out of a potential deal.

The Manchester-based company was concerned about a supporters' campaign to boycott the club's commercial partners in protest at the Glazers' ownership of the club, reported the Observer.external-link

Richard Arnold, United's group managing director, has been told that THG is no longer interested in a deal that would have started on 1 July.

The name of Myprotein, a Cheshire firm owned by THG, would have been on United's training kit, replacing the branding of Aon, sponsors of the club's Carrington training centre.

Both THG and United declined to comment, with those close to the deal at Old Trafford confirming there were no ongoing talks.

Last Sunday's supporter protest against the Glazers outside Old Trafford led to United's game with Liverpool being postponed until Thursday.

The Glazers' move to join the now defunct European Super League heightened the supporter opposition towards the American family.

Co-chairman Joel Glazer is planning his first meaningful discussions with Manchester United fans since his family bought the club in 2005.

Glazer has issued a lengthy response to four key demands included in an open letter by the club's supporters' trust and again apologised for United's behaviour around the scrapped European Super League concept.

He also acknowledged "the need for change" with how the club consults with fans.