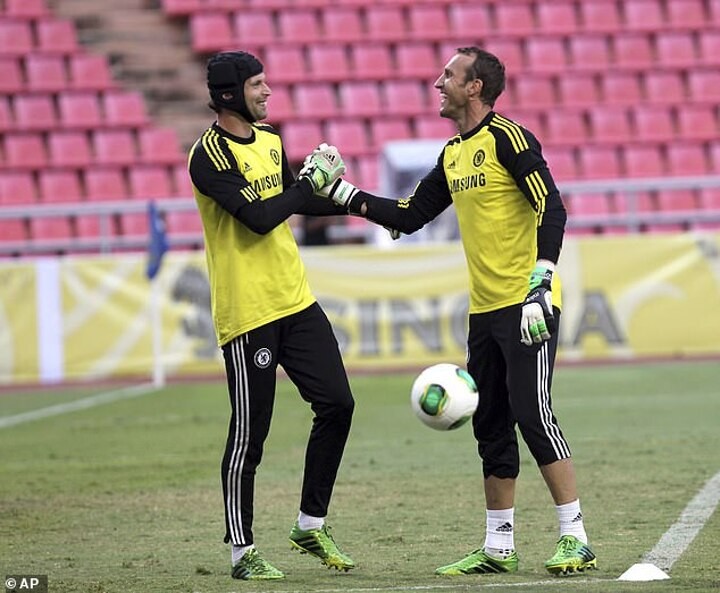 Mark Schwarzer has shockingly claimed that Petr Cech was the best goalkeeper training at Chelsea this season before Edouard Mendy arrived at the club.

The Blues signed £20million goalkeeper Mendy this summer to provide extra competition for Kepa Arrizabalaga and Willy Caballero who had shared the first-choice goalkeeper spot due to inconsistencies from the pair.

But ex-Chelsea goalkeeper Schwarzer has heard that Cech, who was named in the west Londoners' 25-man Premier League squad despite retiring in 2019, was performing better in training sessions that Kepa and Caballero.

The Australian told Optus Sports: 'From my understanding, he was better than the Chelsea keepers. But this was before Mendy arrived at the club.

'He was performing and training better than the Chelsea keepers. He just was saying he felt so good.'

Cech is one of the most successful goalkeepers in Chelsea's history, having won four Premier League titles, four FA Cups and both the Champions League and the Europa League competitions during his 11-year stay at Stamford Bridge.

The Czech Republic goalkeeper then left the Blues after falling behind Thibaut Courtois in the pecking order, joining Arsenal in 2015 where he spent four more years as a professional.

Upon retiring, the former goalkeeper was immediately hired by the Blues as a technical director at the start of the 2019-20 season when Frank Lampard was hired as head coach.

And Schwarzer, who competed alongside Cech for the goalkeeper spot at Chelsea between 2013 and 2015, believes the 38-year-old's current training performances at Stamford Bridge are making him regret retiring so soon.

Schwarzer added: 'He said had he known that after having time off he would have felt so good, he would have only had six months off and wouldn’t have retired.

"He actually believes he’s fit enough and strong enough and good enough still to play in the Premier League. I know he’s kicking the ball further than he did towards the end of his career.

'The injuries he had, the problems he had with his ankle, his calf, they were hindering his kicking game. So apparently he has no problems with that at all any more. He’s kicking the ball as far as he [ever] did.'