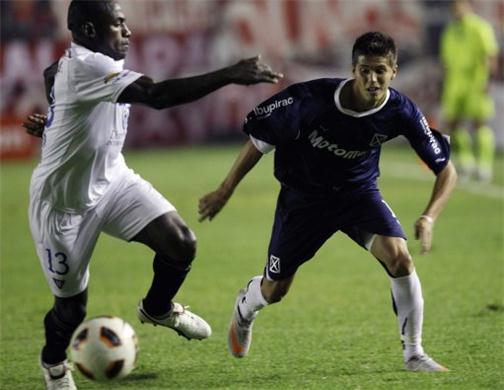 With Andre Ayew set to represent Ghana in the African Cup of Nations, OlympiqueÂ  Marseille seek a replacement for the youngster as the search leads to the Argentine Apertura with young Patricio Rodriguez of Independiente in the frame

With the African Cup of Nations on the horizon, Olympique de Marseille are set to lose the likes of Andre Ayew, Jordan Ayew and Souleymane Diawara for the African showpiece.

Of the aforementioned three players, the absence of Andre Ayew would certainly be felt a lot.

The young Ghanaian has been a beacon of hope for the Rhone club since the beginning of the new campaign.

In a bid to find a suitable replacement for the winger/forward, Les Phoceensâ€™ direction is now looking for a good replacement of the African.

In the columns of Argentine sports daily Ole, the young midfielder has got raving reviews.

This young player is Patricio Rodriguez who is currently on the books of Argentine Primera Division side Independiente where he has become one of the hottest talents of Argentine football.

"Benfica and Olympique de Marseille have expressed interest. Which player does not want to move? I want the best for Independiente and for me,â€ the youngster confessed while talking to the media regarding a possible move away from the Estadio Libertadores de America.

The young Argentine can also operate on the left wing and has proven his ability to shoot the ball from long distance.

Olympique de Marseille have already begun work in order to sign the player in the upcoming winter transfer window.

On December 8, 2011, Independiente coach Ramon Diaz did not play Rodriguez on the 18th Week of the Apertura game against San Lorenzo when it was found out that the youngsterâ€™s performance will be monitored by European scouts.

However, the youngster played the second half of the 2-1 win over Tigres and it was enough for the European scouts to find out about his great talent and promise.

A fee in the region of 35 million Euros is considered to be Independienteâ€™s requirement for the player so Marseille might not be able to sign the player considering their financial situation.