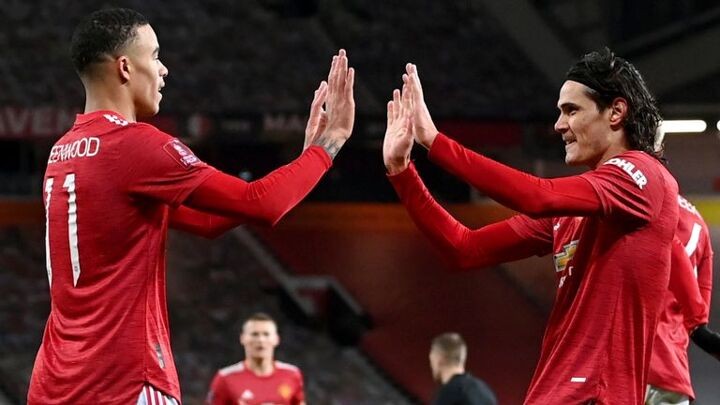 Mason Greenwood says Manchester United team-mate Edinson Cavani does "everything right as a footballer" as he continues to learn from the veteran striker.

Cavani has made a big impact since arriving at Old Trafford in October with his goals and incredible work rate, but the 33-year-old's influence on United's young players has been arguably his most important role.

Nineteen-year-old forward Greenwood, who scored his first goal since early December in Sunday's FA Cup fourth-round win over Liverpool, says he admires the Uruguayan's professionalism - along with two other veterans in United's squad.

"He's a top striker, you can tell the second he came here," Greenwood told the club's official website.

"He reminds me a lot of Juan [Mata] who's here as well, and Nemanja [Matic] - two great professional players. It's always good to have them in your team, as a young lad, to look up to."

On Cavani's most recognisable attribute, Greenwood added: "For me, it's his movement really. I've never seen a striker do as many movements.

"He does probably the same movement about six or seven times a game, like the one against Southampton, he does that every day in training. He scored two from doing the exact same thing.

"It's good to see a high-level striker at the club you can take note of."

Ole: Greenwood has grown and matured

No teenager has scored more goals for United in a single campaign than the 17 netted by Greenwood last season - a tally level with Brian Kidd, George Best and Wayne Rooney.

He has struggled to replicate his 2019/20 form in the opening months of this campaign - managing just four goals in 23 appearances - but United manager Ole Gunnar Solskjaer insists he is improving.

"I think Mason has taken steps, he has grown, is more mature and he has been training with Edinson Cavani for half a season now," the Norwegian said ahead of his side's Premier League match against Sheffield United on Wednesday.

"He is learning good habits and whoever doesn't learn good habits from a good professional like him or Bruno [Fernandes], or the players we've brought in, that's a pity.

"I'm very confident that Mason will chip in with good performances and goals and assists."