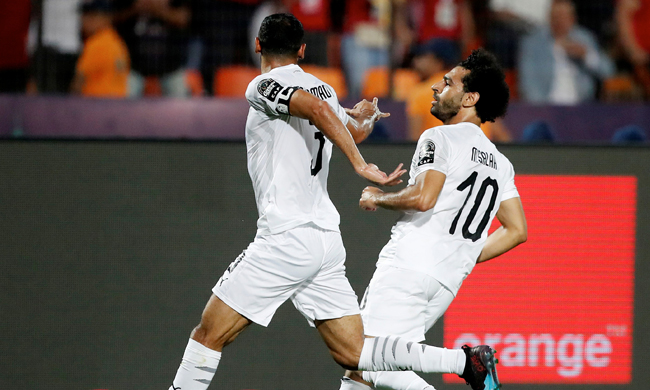 Already-qualified Egypt won their African Cup of Nations group with a 2-0 victory over Uganda at Cairo Stadium on Sunday, but the flattering score-line was hardly convincing for the demanding supporters following another lackluster display.

Mohamed Salah and Ahmed Elmohamady, who also scored in the previous 2-0 win over DR Congo, were on target again in the first half as Egypt made it three wins out of three and maintained their run of clean sheets.

But for those who did not even watch the match, a quick glance at the statistics will show how the result was harsh on a brave Uganda side, who made life hard for their illustrious opponents.

Uganda had 16 shots, including 11 on target, to Egypt's five. They also won nine corners compared to a solitary one for the record seven-time African champions.

Just when it looked as though Uganda would stun the home crowd, Liverpool wizard Salah scored out of nowhere, brilliantly curling a left-foot free-kick over the wall and past the despairing dive of keeper Denis Onyango.

Aston Villa's Elmohamady doubled the lead on the stroke of halftime to dampen the spirits of Uganda, albeit briefly as the Cranes came out with all guns blazing in the second half to waste several goal-scoring chances.

Egypt finished on top of Group A with nine points, five ahead of second-placed Uganda who joined them in the last 16 after DR Congo (third with three points) crushed Zimbabwe 4-0 in the other group game.

The Pharaohs will face a third placed side from Groups C, D or E on Saturday as they bid for an eighth Nations Cup crown.