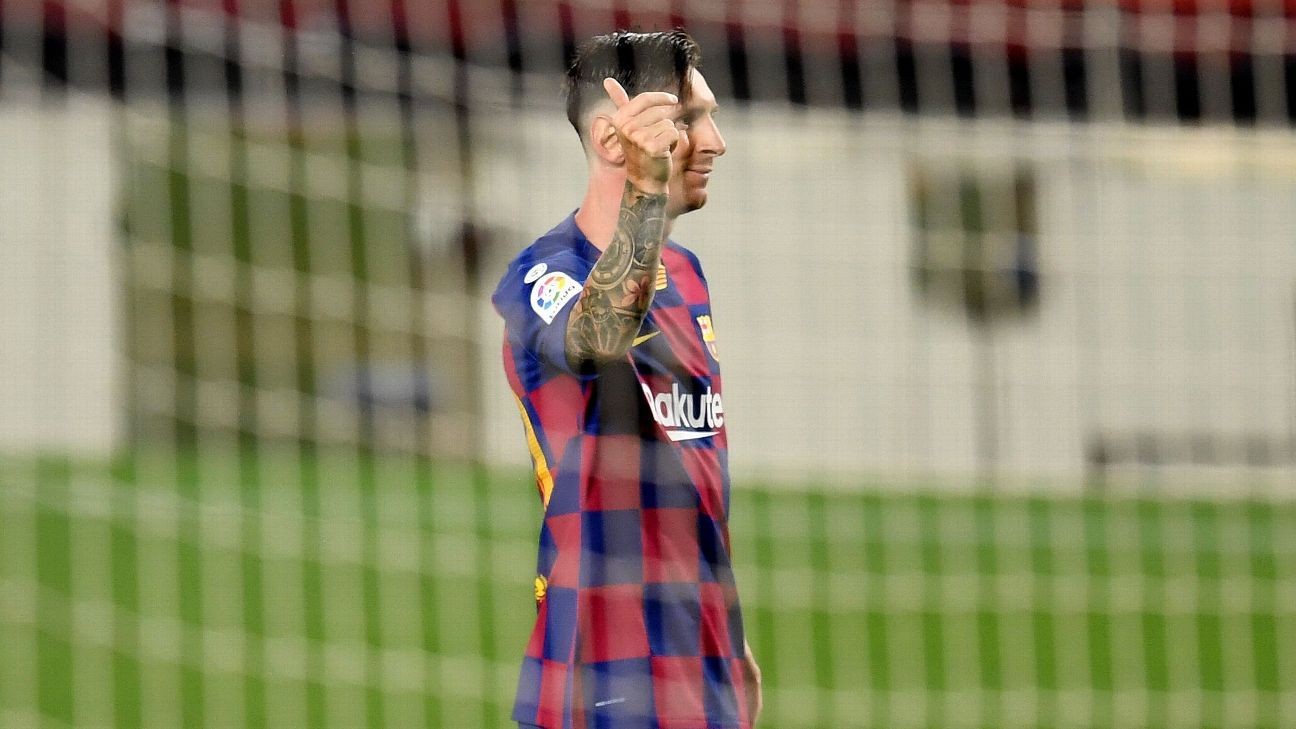 It's been quite a week for Lionel Messi. The Barcelona superstar celebrated his 33rd birthday on June 24, then joined one of elite football's most exclusive and illustrious clubs six days later when, against Atletico Madrid, the Argentina captain netted the 700th goal of his career.

Having sat on 699 senior career goals for club and country since converting a penalty in Barca's win over Leganes on June 16, Messi hit the latest milestone in his stunning career when he converted a 50th-minute spot kick, nonchalantly sending Atletico goalkeeper Jan Oblak the wrong way.

Messi has taken 862 games to reach this incredible landmark, which is 111 games fewer than his great rival Cristiano Ronaldo needed to reach the mark at the end of 2019. However, the 35-year-old Ronaldo still boasts the status of the highest active goal scorer, and by some margin. Here are the top five:

Six-time Ballon d'Or winner Messi became the seventh member of a select club of players to have scored 700 or more goals; the group includes some of the greatest stars to play the game, plus one less-heralded name (some records are unverified, so allow for variations in actual totals).

6. Cristiano RonaldoCristiano Ronaldo has been in a running duel with Messi for top individual honours for much of his career. Antonio Balasco/KONTROLAB/LightRocket via Getty Images

Ronaldo took his place among the 700 Club last October with a goal for Portugal with a consolation strike from the penalty spot in a 2-1 Euro 2020 qualifying defeat against Ukraine. The Juventus superstar is also still the world's highest-scoring active player and the one still plying his trade to have scored more than Messi.

- Messi and Ronaldo's most memorable clashes

Fiendishly prolific for West Germany and Bayern Munich in his heyday, "Der Bomber" is fifth on the Rec.Sport.Soccer Statistics Foundation (RSSSF)'s all-time list having scored 735 goals in 793 games. Fourteen of Muller's goals came at World Cups.

4. Ferenc PuskasFerenc Puskas (left) was a Hungary legend and also played four times for Spain, though he never scored. Getty

The legendary striker, nicknamed "The Galloping Major," scored 746 goals in 754 matches between 1943 and 1966 for Honved, Real Madrid and Hungary. Little wonder that FIFA's award for the world's greatest goal each season is named after him.

- Why does Madrid legend Puskas have a statue in Melbourne?

3. RomarioRomario was named FIFA's World Player of the Year in 1994 after winning the World Cup with Brazil. Getty

As per the RSSSF, the Brazilian nabbed 772 goals in 993 first-class matches during a career in which he played for clubs on five different continents between 1985-2007. Romario scored five goals as Brazil won the World Cup in 1994.

The Slavia Prague icon is the highest scorer of all time in official games according to the RSSSF, which lists the striker as amassing a remarkable 805 goals in 530 competitive games between 1928-55. He played internationally for three countries.

1. PeleBoyhood team Santos and NASL side New York Cosmos were Pele's only two clubs over a 21-year career. AP Photo

According to his Guinness World Record, the Brazilian colossus is the highest scorer of all-time with a mind-boggling 1,279 career goals to his name (Edson Arantes do Nascimento on his birth certificate) between 1956-77. That figure is disputed by some -- RSSSF gives him 767 -- but Pele's status as the only male or female player to win three World Cups is not in doubt.