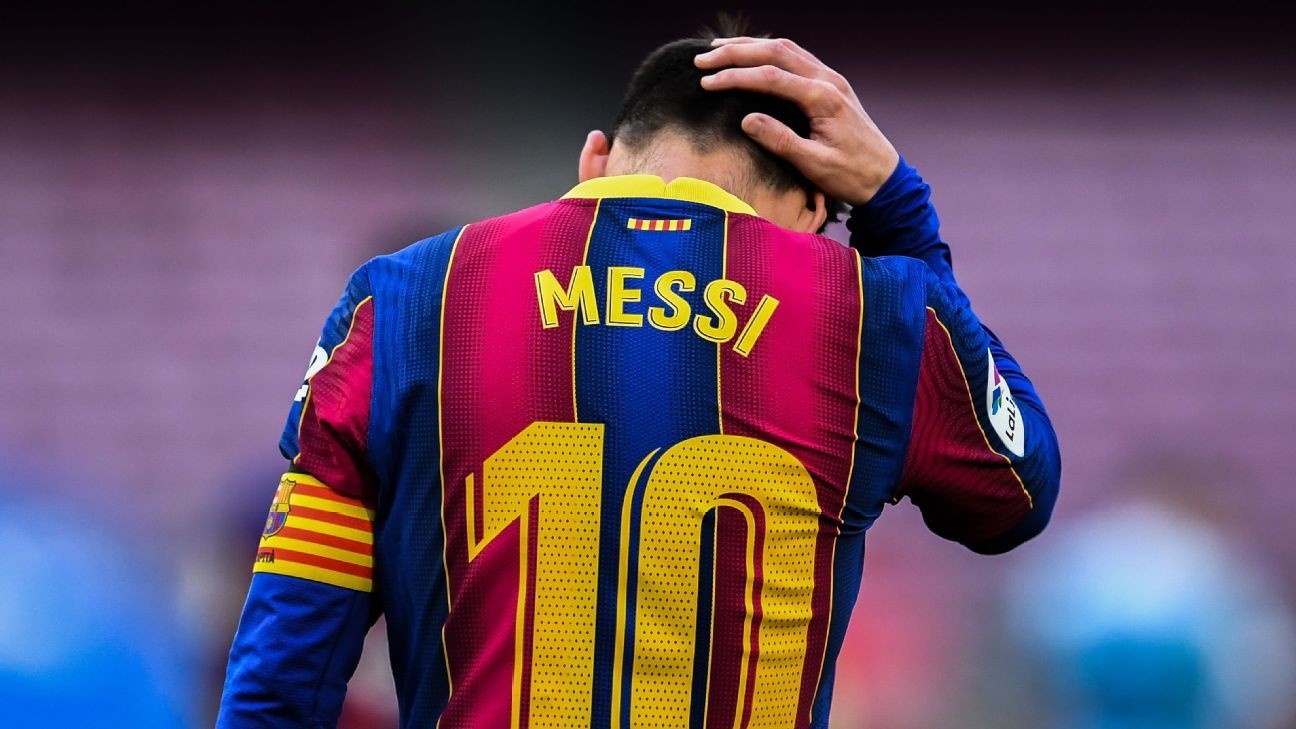 Barcelona's terse statement on Thursday appears to leave no doubt, right down to the headline on the club website -- Leo Messi not staying at FC Barcelona -- that arguably the greatest single club career of any player ever has come to an end.

But, as with Messi's own "Burofax" incident less than 12 months ago, there's more here than meets the eye.

Q: A few weeks ago everybody was reporting that Messi and the club had agreed a new contract. Spanish media were hailing today as "Messi Day" -- the day when it would all become official. What happened?

A: All we know for certain right now is that, according to Barcelona, the club are unable to register the contract due to the Spanish league's rules on player registration, despite having reached an agreement for a new five-year deal with Messi. They don't go into specifics but it's safe to assume that they're referring to LaLiga's version of the "salary cap" which limits spending on wages and player acquisition costs based on projected club revenue and costs. And since Barcelona are in dire financial straits -- with more than a billion dollars of debt, of which as much as $800 million is described as short-term -- Messi's new contract won't get the green light. Which means he will leave.

Q: But how did this happen? Surely they knew what the limits were heading into the summer and the Messi negotiations...

A: Yeah, that's one of the mysteries here. Especially since they spent $9.6 million on Emerson from Real Betis and also made three free agent signings -- Memphis Depay from Lyon, and Sergio Aguero and Eric Garcia from Manchester City -- and the first two come with big salaries. The obvious question is this: If Messi was your priority (and he obviously was), why would you commit around $50m in wages and the Emerson fee to sign those four other players if it was going to put you over the cap? That's why plenty are speculating there's something else afoot.

Messi wants to stay at Barcelona, but forces beyond his control might mean this split is permanent. David Ramos/Getty Images

A: Some reports are suggesting that there was a last minute hitch in the Messi deal, in terms of commissions to be paid and that he wasn't entirely happy with some of the club's transfer dealings this summer (even though they did sign his buddy and Argentina teammate, Aguero). And, because the club could never blame Messi, they're blaming LaLiga's rules instead. There may be some truth in that, but a much more plausible explanation may be the tense relationship with LaLiga and that it's a power play between Barca president Joan Laporta and Liga boss Javier Tebas.

Q: What's that about?

A: In one word: control. Barcelona are, along with Real Madrid and Juventus, one of only three clubs who have not dropped out of the Super League and, in fact, are taking legal action to push their case. Tebas, as you'd expect, is dead set against the Super League as he believes it would hurt the competitive balance of LaLiga. Perhaps more important than that is the deal Tebas struck with a private equity firm, CVC Capital Partners, which would see LaLiga receive a cash infusion of around $3.2 billion in return for 10% of future revenues and a 10% stake in a newly formed commercial company. Barcelona, like Real Madrid (who, maybe not coincidentally, issued their own statement lamenting the deal on Thursday) are dead-set against the CVC agreement.

Q: Why don't they like the deal? Don't they want the cash?

A: I'm sure they do, but they also say Tebas negotiated the agreement without their knowledge and that it hands the future of the clubs over to private investors. They're likely also unhappy with how LaLiga and CVC might redistribute funds going forward. The deal now needs to be approved by the clubs and Real Madrid and Barcelona are likely to lead the "no" front.

Q: I get that, but how does Messi come into it?

A: Simply put, LaLiga, as a product, is less valuable without Messi. His departure, or even just the possibility of his departure, could turn public opinion against Tebas and his plans. Barcelona and Real Madrid generate the bulk of Liga revenue and a sizable chunk of that trickles down to other clubs. Messi leaving wouldn't just hurt Barcelona, it would hurt LaLiga. And not just in terms of image, but in commercial terms. That's another of the theories being bandied about. But there's a third, somewhat simpler scenario that may be the most plausible.

Messi has a great relationship with returning president, Joan Laporta, but this negotiation has been way more complicated than anyone expected. Jose Luis Contreras/DAX Images/NurPhoto via Getty Images

A: It's hard to believe that, having had months to talk to Messi and his family, Barcelona would not get their sums right and suddenly realize they couldn't afford him. The structure of the five-year deal they agreed suggests they were careful to stay within the cap. Plus, the transfer windows is still open until September. They could, conceivably, move on other players to keep him around. It wouldn't be easy, because the guys they'd like to transfer out of Barca are on high salaries and few clubs could afford them, but there are ways to do it. Not to mention the fact that if Messi was as committed to staying as they suggest, he could lower his wage demands or include more bonuses in his package or whatever. Instead, they're announcing that they're throwing in the towel now.

LATEST NEWS | Leo #Messi will not continue with FC Barcelona

Q: And what does that suggest?

A: That it's a strategic move to spook Tebas. Either within the context of CVC or the Super League or, more simply, in terms of cutting them some slack on the salary cap. This feels like giving up without a fight. And I can't see Barcelona -- or Messi -- doing that.

Q: OK, let's assume you're wrong. Let's assume it really is over. Where could he go to next?

A: The usual suspects will be mooted: Paris Saint-Germain, Manchester City, maybe Manchester United, maybe a move to Major League Soccer. But the fact of the matter is that Messi became a free agent on July 1 and, legally, from Jan. 1, he could have signed a pre-contract with anyone. And, while there may have been interest from City 12 months ago, in the Burofax days, it's not as if clubs were beating a path to his door in the past six months. Why? Because many believed he was committed to staying at Barcelona. Now, most clubs have made other plans. City are pursuing Harry Kane. PSG are trying to extend Kylian Mbappe's deal before he becomes a free agent next June (and they've committed huge amounts in salary on big name free agents like Georginio Wijnaldum, Gianluigi Donnarumma and Sergio Ramos). Signing Messi would be a huge undertaking, you don't just magic up close to half a billion dollars over the next five years out of nowhere.

Q: So what's going to happen?

A: I'm purely speculating here, we may know more when Laporta addresses the media on Friday and, by the way, we haven't heard from Messi himself yet. But fundamentally we have a situation where -- at least according to Barca's statement -- Messi wants to stay and the club want to keep him, but the league won't allow it, even though his departure would hurt everyone, league included. Does that sound right or logical to you? No, it doesn't. Because it isn't. My guess is come Sept. 1, he'll still be a Barcelona player. Either because he will have restructured the contract they agreed or because Barca will have recouped some transfer fees or because LaLiga will have revised their salary cap to accommodate the club. Or a combination of all three.