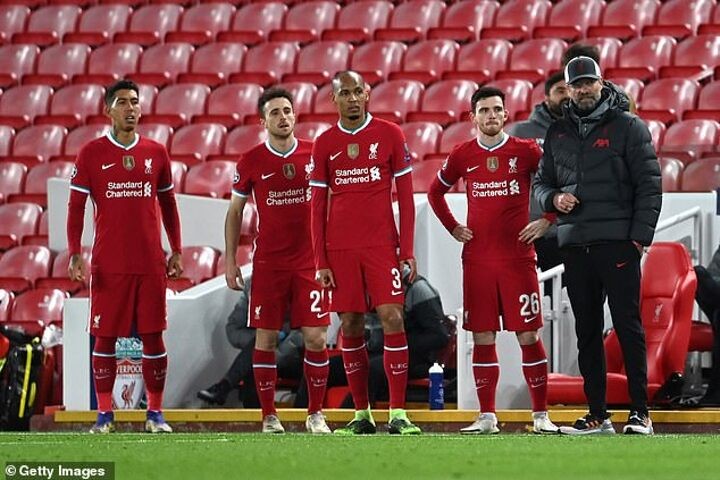 Michael Owen criticised Liverpool's performance in their shock Champions League loss to Atalanta on Wednesday - but admitted they should look at the positives in the defeat.

The Reds were humbled 2-0 at Anfield by the Serie A side thanks to second-half goals from Josip Ilicic and Robin Gosens, with Jurgen Klopp's side failing to registera shot on target in the 90 minutes.

It was Liverpool's first home defeat in a 90-minute game since they were knocked out the League Cup by Chelsea in 2018 and ex-Reds striker Owen urged his former side to put the disappointing display behind them.

Owen told BT Sport: 'It was a really really poor performance, the worst we've seen from Liverpool in a long time. It's one of those where you go, "let's put this to one side and focus on the next one."

'You always must look at the positives. If you are going to have a bad day, you should have it today.

'If you said at the start of the group, you need one win from the last two games, then Liverpool would have taken it. If you are going to lose one then this is not a bad one. It is not ideal but it's better than (losing) on Sunday.'

Klopp's Premier League champions had the chance to seal progression to the Champions League knockout stages with two games to spare tonight but the loss has blown the qualification race wide open.

Defeat means Liverpool need just one more victory in their final two group games - at home to Ajax and away to FC Midtjylland - to reach the knockout stages of Europe's premier club competition.

With Liverpool facing matches every three days between now and Christmas, manager Klopp opted to make several changes to his line-up on Wednesday night, leaving the likes of Andy Robertson, Roberto Firmino and Diogo Jota on the bench.

Neco Williams, Rhys Williams and Kostas Tsimikas all played in defence while there was also a start for Divock Origi up front alongside Sadio Mane and Mohamed Salah.

The mass changes to the Reds line-up appears to have backfired, with fellow BT Sport pundit Rio Ferdinand hoping Klopp does not end up regretting the tinkering.

Ferdinand claimed: 'I just hope they don't live to regret this with the way he (Klopp) flipped the team selection.

'He was in a position to do that but in hindsight, which you love to have, he will look at it differently. Ajax are a tough team, they have to get a result (next week).

'They didn't seem at it. A lot of new faces coming into the team who are inexperienced. It's a great education for them, sometimes you learn more when you don't win and you analyse yourself as a whole.

'Klopp won't read too much into this performances - he's got big players to come back in. (They should) get over the game and get over the moment.'

Former Liverpool striker Peter Crouch added: 'There wasn't much urgency, the levels went down slightly. You looked at Salah and Mane and they weren't in the game.

'Credit should go to Atalanta, they stopped them from playing. (Papu) Gomez and Ilicic were the two best players on the pitch tonight.'