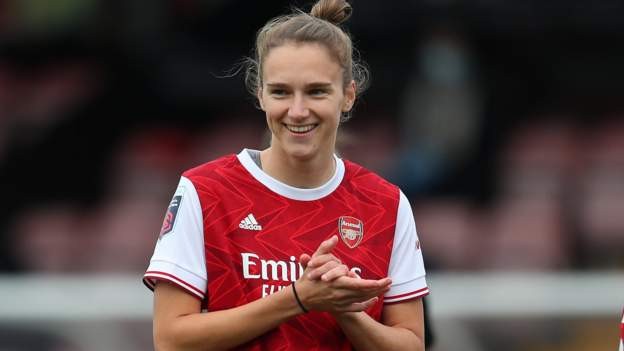 Needing one goal to eclipse Nikita Parris' all-time WSL record of 49, Miedema claimed a first-half hat-trick, with Katie McCabe and Caitlin Foord also on target before the break.

Lucia Leon headed in a consolation, but Arsenal made it five wins from five.

Miedema made her piece of history with a low finish from a tight angle after McCabe had given the hosts an early lead with a brilliant curling free-kick.

The game was as good as over inside 15 minutes when the Spurs defence failed to deal with a long ball and Foord ran on to slot past keeper Becky Spencer.

A quickfire double from Miedema put the hosts out of sight by half-time, the first via a deflection from an acute angle before the Dutch international combined with Foord to tap in her 12th goal in her past six WSL games.

The visitors had a chance to restore some pride after the break when McCabe brought down Leon, but Zinsberger kept out Dean's spot-kick.

Foord rubbed salt in the wound via a deflected sixth - Arsenal's 29th league goal in five games this term - but Spurs had the final word thanks to Leon's bullet header.

The win sent Arsenal two points clear at the top after Everton were held to a draw by Brighton.

While strikers are often placed in the elite category if they manage a ratio of a goal every two games, Miedema has a staggering WSL average of better than a goal a game, netting 52 times in just 50 appearances for the Gunners.

After topping the WSL scoring charts for the past two campaigns, the 24-year-old has been in blistering form in 2020, netting in each of her past six WSL fixtures.

Modelling her game on prolific Arsenal and Manchester United striker Robin van Persie when growing up, Miedema made her senior debut for Heerenveen aged just 15, and top-scored in the Dutch women's league in 2013-14 with 39 goals.

She top-scored at the Uefa Women's Under-19s Championship that summer as the Netherlands took the title, and was snapped up by Bayern Munich where she won two Bundesliga winner's medals.

On the senior international stage, Miedema bagged eight goals at the Women's European Championships in 2017, helping the Dutch women to their first major silverware before swapping Germany for north London that summer.

Attempt missed. Alanna Kennedy (Tottenham Hotspur Women) header from the left side of the box is close, but misses to the left. Assisted by Ashleigh Neville with a cross.

Lucia Leon (Tottenham Hotspur Women) wins a free kick in the attacking half.

Attempt missed. Shelina Zadorsky (Tottenham Hotspur Women) header from the centre of the box is close, but misses to the right. Assisted by Siri Worm with a cross following a corner.

Katie McCabe (Arsenal Women) is shown the yellow card for a bad foul.

Rosella Ayane (Tottenham Hotspur Women) wins a free kick in the defensive half.

Attempt missed. Siri Worm (Tottenham Hotspur Women) left footed shot from outside the box is high and wide to the left from a direct free kick.

Angela Addison (Tottenham Hotspur Women) wins a free kick in the attacking half.