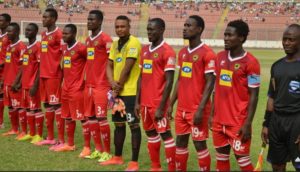 Match week two of the Ghana Premier League witnessed a memorable minute of silence held at all league centers across the country for the late tacticians of the game who passed on during the off season.

Fred Osman Duodo, Sam Arday and E.K Afranie who all made a huge impact in Ghana Football as coaches passed away during the off season but the Premier League decided to honour them before kickoff to the various matches of week two.

Arday, who was the latest to have died and yet to be buried, was one of the most successful coaches at any age level for Ghana, guiding the under-17 team, the Black Starlets, to the 1995 FIFA U-17 World title and the African Under-17 Championship in Mali that same year.

Sam Arday also led Ghana’s Olympic Team to a Bronze medal at the Barcelona Olympics in 1992, , the first such accolade for any African team.

Prior to that he achieved some success with the Black Satellites at the 1991 Africa Youth Championship in Egypt, finishing third.