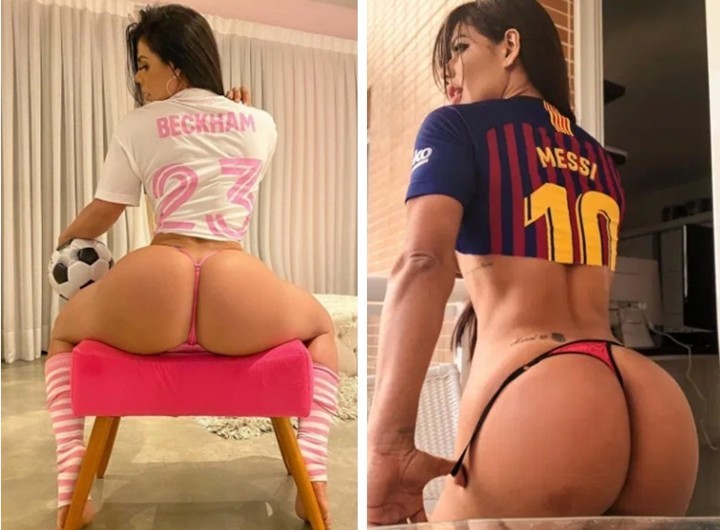 Miss Bumbum Suzy Cortez has snubbed her hero Lionel Messi in favour of showing off her curves in a David Beckham shirt.

The self-proclaimed Barcelona fan has been less than subtle in showing off her love for the Argentine magician in the past.

So much so that she even got his face tattooed near her groin and was blocked after bombarding him was saucy pictures on social media.

And now it appears she is taking her obsession elsewhere following the launch of Beckham's MLS franchise Inter Miami.

The American side lost both of their opening fixtures before the coronavirus pandemic brought football to a halt.

But their ropey results haven't stopped Cortez from stripping off to pose in an Inter Miami shirt with a matching pink thong.

The Brazilian even promised Golden Balls that she was going to visit their new stadium once lockdown is over and football in the MLS is back.

Alongside a string of pictures leaving little to the imagination, she said: "Everyone knows that I love football and now in the city they have the best MLS team.

"As soon as I get to the USA, I'm going to visit the stadium, but I'm looking forward to seeing the beautiful Miami Freedom Park too.

"Congratulations to the best English player David Beckham for everything he is doing for football in the United States!

Suzy's eye-popping assets helped her again beat out rumpy beauties from around the world as she became a two-time winner of the coveted Miss BumBum title last year, adding to her 2015 crown.