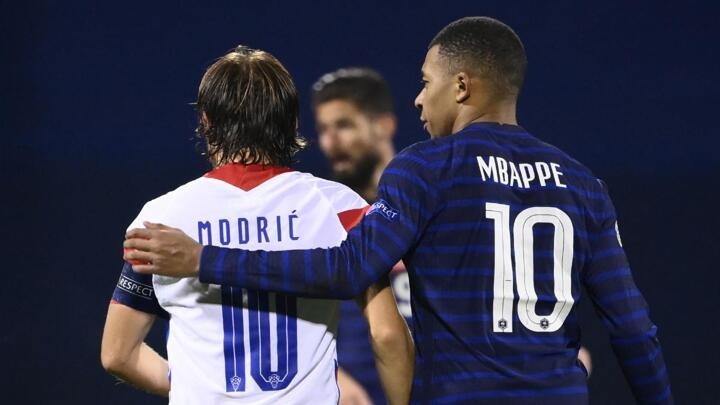 Luka Modric does not profess to know whether Kylian Mbappe will join Real Madrid, but he knows the PSG star would fit the bill.

Luka Modric has admitted he would love to play with Kylian Mbappe at Real Madrid.

The Paris Saint-Germain striker continues to be linked with a switch to the LaLiga giants, and recent unconfirmed reports claimed Mbappe has told his French club he wants to leave.

Mbappe has also previously been linked with a possible switch to Liverpool, who Madrid face in the second leg of their Champions League quarter-final on Wednesday.

It now appears the Spanish capital is a likelier destination than Merseyside for 22-year-old Mbappe, who helped France win the 2018 World Cup final against Modric and Croatia.

Asked about the prospect of signings for next season, Madrid playmaker Modric told a pre-match news conference: "There are a lot of rumours and news about players coming and leaving. I can't comment on that.

"Kylian Mbappe is a great player, he has showed us many times with PSG and the French national team. Great players are always welcome at Real Madrid, of course.

"But it wouldn't be correct for me to talk about players from other teams, especially at this stage of the season.

"We'll see what happens next season, but what I can tell you is he is one of the best players in the world."

The first degree of uncertainty over whether Mbappe and Modric share a dressing room next term centres on whether a deal will be struck between PSG and Madrid, but the second would be whether Modric remains with Los Blancos.

The 35-year-old midfielder's contract expires after the end of the season, and Modric is hopeful of staying on, saying there have been positive moves towards that happening.

"Like always, my contract extension is going well," Modric said. "I can't say anything else. I've always said I want to keep playing here at Real Madrid.

"I feel very happy here and hope I can stay here next season, but apart from that I can't tell you anything else."

Modric and Toni Kroos continue to look like a midfield combination that Madrid boss Zinedine Zidane would be bold if not foolish to split up, and Modric said his German team-mate has "made me feel at my most comfortable".

"I enjoy playing alongside Toni a lot. We understand each other very well," Modric added. "Let's see how much longer we can share the pitch together."

Madrid, who lead 3-1 from the first leg against Liverpool, travelled to Anfield without injured captain Sergio Ramos, and it emerged on Wednesday the skipper has also tested positive for the coronavirus.

They are also without Raphael Varane, Lucas Vazquez, Dani Carvajal and Eden Hazard for a game which Madrid approach on the back of a Clasico win over Barcelona in LaLiga.

Former Tottenham midfielder Modric said it was unfortunate the game would be played behind closed doors, given the volume that can be generated at Liverpool.

Madrid won 3-0 at Anfield in the group stage in 2014, with Modric and Kroos again at the heart of midfield.

Modric said Madrid would have relished a noisy welcome, saying: "I would like to play at Anfield with a crowd because I played a few times with Tottenham and played that game with Real Madrid and the atmosphere was amazing.

"Everyone wants to play with fans, with a crowd. That's why we're not thinking about if it's an advantage for us or not."