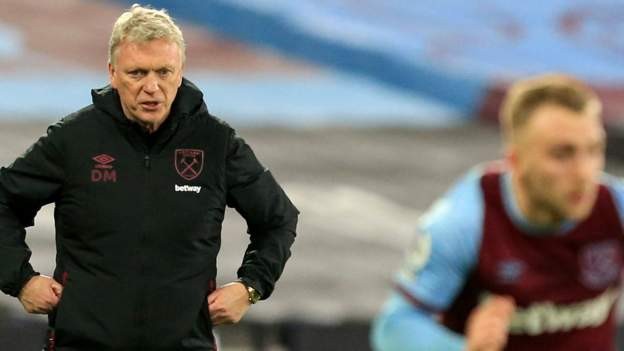 Michail Antonio is the only recognised striker in their squad after Sebastien Haller joined Ajax earlier this month.

West Ham crucially bought Tomas Soucek and Jarrod Bowen a year ago, in what Moyes says is "never a great window".

"I am not sure we would have been a Premier League club if we hadn't done business last January," Moyes said.

"It helped us greatly last year. But it has never been a great window - nobody has got much time and you are not sure of players' availability.

"But if we can find somebody who we think can add to the squad and help us get better then we are going to try and do that."

Moyes, whose West Ham side are ninth in the table and just five points adrift of the Champions League spots after Saturday's 1-0 win against Burnley, said they have already been unsuccessful with bids for players.

"We have had one or two offers for players either rejected or not available or the clubs want too much money in our eyes, so it is not as if we are not trying," the 57-year-old said.

"If we don't get anybody in then that's the way it is going to be, but it is a transfer window and we are out there trying."

Adding a striker remains the focus for Moyes, who is looking to ease the burden on Antonio who has struggled with hamstrings problems since October.

The 30-year-old scored the winner against the Clarets at the weekend, his first goal in five games during three injury-disrupted months.

He is now set to play in his third game in eight days when the Hammers entertain West Bromwich Albion on Tuesday.

"I don't think he is at full tilt at the moment, I think he is doing well, but I know there are another couple of gears for him to go into," Moyes said.

"I think he is protecting himself slightly at the minute, but he is an important part of the team for us, as you saw with his goal on Saturday.

"He got us the result, so we have got to be careful with him, but we also want to win games and we want to keep moving forward, so we will try and get Micky ready for the game."

All the goals, highlights and analysis from the weekend's Premier League matches, including Manchester United's visit to Liverpool: MOTD2 is streaming now on BBC iPlayer