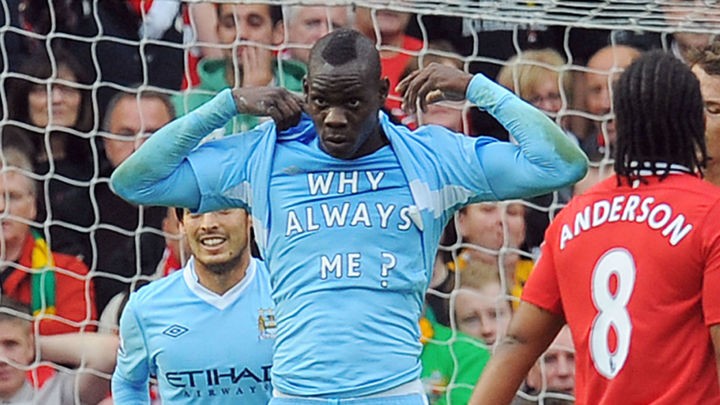 No series on myths in football would be complete without a piece on Mario Balotelli. The man's entire career is the stuff of legend.

Jose Mourinho only spent two years working with the striker yet said he could write a 200-page book on their time together at Inter.

Roberto Mancini says he loves Balotelli like a son but even he admits that the striker is "crazy".

As for Balotelli himself, he admits that he "sometimes does strange things", which explains why there are so many stories about one of the game's true mavericks.

During his time at Manchester City between August 2010 and January 2013, the club's supporters came up with a song that perfectly encapsulated Balotelli's penchant for mixing brilliance with wackiness on and off the field:

But when he plays, He's f*cking class.

Drives round Moss Side, with a wallet full of cash,

Can't put on his vest, but when he does, he's the best.

Goes into schools, tells teachers all the rules

Sets fire to his gaff, with rockets from his bath.

Doesn't give a f*ck, cos he did it for a laugh.

Runs back to his house, for a suitcase full of cash.

But how many of those references are grounded in reality?

Below, Goal delves into the many myths related to Balotelli...

In March 2011, City launched an investigation into a report that Balotelli had thrown a dart in the direction of at least one youth team player at the club's Carrington training academy. The forward would later admit to Sports Illustrated, "I was playing darts, yes, but I never threw darts at anyone."

Balotelli avoided any sanction over the incident and has always insisted that he was only fined once during his time at the Etihad, for returning to Italy in 2012 rather than remain in Manchester to celebrate City's Premier League title triumph.

Balotelli mysteriously missed the start of the second half in City's 2-0 Europa League loss to Dynamo Kiev on March 20, 2011.

He was eventually substituted in the 57th minute, with manager Roberto Mancini explaining afterwards that the striker appeared to have suffered an allergic reaction to the type of grass on the pitch at the Valeriy Lobanovskiy Stadium.

"His face was swollen – I don't know why," Mancini said at his post-match press conference. "He wanted to play in the second half but he had this problem 10 seconds before coming out. I came out a minute before the players and I didn't see Mario. He then said he could play but his face was swollen."

Balotelli had suffered similar reactions to artificial surfaces as a child, while Inter's medical team also discovered allergies to certain products during his time at the club.

Just days after joining City from Inter in August 2010, Balotelli crashed his Audi R8 on his way to his new club's training ground.

It's long been claimed that the police found the Italian in possession of £5,000 and that when asked why he had so much money on him, Balotelli replied, "Because I am rich." However, that part of the tale has never been substantiated.

Given his previous car crash at City, AC Milan banned Balotelli from go-karting due to the risk of injury after he joined the club in 2013.

The attacker stopped driving go-karts but he didn't stop going to the track.

Indeed, Balotelli instead took a £200,000 Ferrari for a spin around the Pala K karting complex in Milan.

"It's my go-kart track, so I could go inside in my own car," Balotelli said by way of justification. "There were no problems."

At approximately 1:30pm on Thursday, January 12, Balotelli was driving in Manchester when he felt the call of nature. Consequently, he decided to promptly park his Bentley outside of Xaverian College, enter the canteen and politely ask if he could make use of their facilities.

"Then he went to the teachers' staff room," student Edward Gasson told the Manchester Evening News.

"After that he was just walking round campus like he owned the place and everyone was following him around.

"I'm a City fan so it was amazing to see him but it was a bit ridiculous for him to come here – you would never expect it to happen."

A spokesperson for the school, meanwhile, enthused: "Xaverian was delighted to receive a surprise visit from Mario. We weren't able to enrol him on any courses but he is welcome back anytime."

Sadly, there is no truth in the story that Balotelli once came to the aid of a young student who had skipped class in order to avoid a schoolyard bully.

Balotelli became renowned for random acts of generosity in Manchester. It was even said that he once travelled around the city dressed as Santa Claus, distributing money to strangers.

There were also rumours of him putting £1,000 in the collection basket at a Christmas Eve mass, giving £2,000 to a homeless man after a successful night out at a local casino with Blackburn's Christopher Samba, and paying everyone else's tab as he filled up his own car at a petrol station.

Unfortunately, while Balotelli has a reputation as a nice guy, he has denied all of these stories.

On Friday, October 21, City boss Mancini praised Balotelli for an improvement in his behaviour on and off the field, admitting that he hoped the forward was "changing his mentality".

Just before 1:00am the following morning, two fire crews were called to Balotelli's house to deal with what was described as "a significant fire" on the first floor.

According to reports, police were also called, primarily to prevent Balotelli re-entering his home to salvage a quantity of money and a suitcase.

An official statement from the fire service department confirmed that the blaze – which was put out inside half an hour – had been caused by a firework.

Balotelli, though, has admitted that he and his friends were letting off fireworks but always insisted that they hadn't been inside the bathroom and that the story had been blown out of proportion.

"It wasn't like my house was on fire," he told Sports Illustrated. "It was just the bathroom, because one firework went the wrong way.

"It took the curtain, and the curtain got on fire and the smoke went around the house. But we weren't inside. We were outside with the fireworks.

Balotelli famously tapped into the theme that misfortune followed him around when he netted in City's 6-1 rout of Manchester United at Old Trafford the very next day and pulled up his shirt to unveil a vest with 'Why Always Me?' printed on it.

In August 2013, a video appeared of Balotelli playing the Italian national anthem on a grand piano. It racked up thousands of views on YouTube but there were immediate doubts over whether the Palermo native was actually on account of some rather suspicious camera movements.

When asked about it, Balotelli said, "I have to say yes, of course [it is real]. Do I promise? No. But I say yes!"

And therein lies the problem with trying to unravel football's biggest enigma: even the man himself is sometimes willing to blur the lines between fact and fiction.