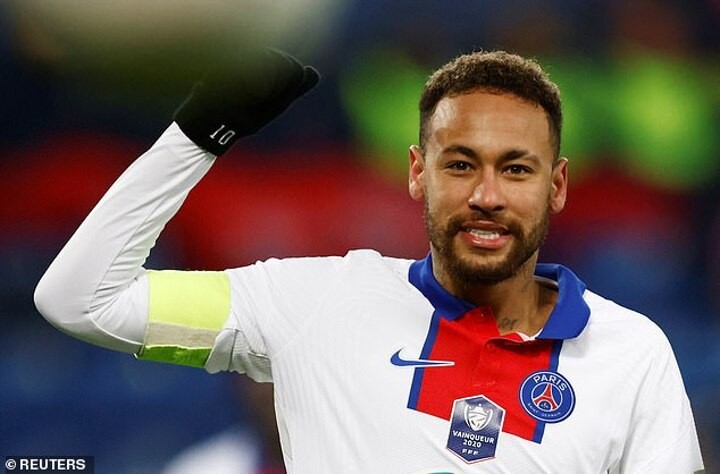 Neymar is on track to play against his former club Barcelona with PSG in the Champions League last-16 second leg.

The Brazilian was desperate to feature in the first game back at the Nou Camp but was sidelined with a groin injury and his team went on to win 4-1.

This time around, the forward is likely to play a part in next Wednesday's clash with Mauricio Pochettino's men all but through to the next round.

PSG's medical report read: 'Neymar is carrying on his rehab and his individual work on the pitch, a return to squad training will be evaluated come the end of the week.'

The report went on to reveal more positive news that Angel di Maria is close to making a comeback too.

'Angel Di Maria is back as scheduled and has progressively been training with the squad over the last 48 hours', it read.

There is a lengthy injury list for the French champions at the moment.

But all of those players except Bernat are expected to be in contention for the second leg against Barcelona.

As it stands, Neymar will be able to play if fit enough, but he could still be in hot water for a tweet during the first game.

He posted that the decision to award his old side a penalty was 'a joke' and UEFA could hit him with a two-game ban.

The UEFA disciplinary code prevents 'insults or other conduct that violates the basic rules of conduct.'

Neymar later tweeted 'Gol Porra', and although some believed this to mean 's*** goal', others think it was in celebration at PSG scoring in the game.

As it stands, Neymar will be free to play and he has not so far been punished for the outburst. Kylian Mbappe was the star of the show in Spain, scoring a superb hat-trick to give Lionel Messi and Co a mountain to climb next week.