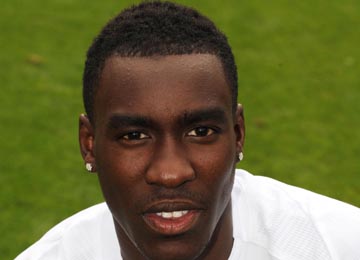 Notts County boss Keith Curle believes his side will have to win promotion into the Championship to stand a chance of permanently signing Ghanaian winger Lloyd Sam in the summer.

Sam, 27, has been a big hit at Meadow Lane since joining the Magpies on loan until the end of the season from Leeds United almost four weeks ago.

After scoring on his debut against Sheffield Wednesday, he took centre-stage in their two league games against Leyton Orient and Yeovil Town over Easter by scoring four goals.

He netted the first hat-trick of his career to fire Notts to a 3-1 win against Yeovil and into the play-off places in League One, with only four games left of the season â€“ against Brentford, Bury, Wycombe and Colchester United.

He is a free agent at the end of the season and Curle said: "Lloyd has got fantastic ability.

"Coming here was exactly what he needed at this stage of his career because he wasn't playing at Leeds.

"His third goal was special. It is the sign of a man playing with confidence, belief and desire.

"If we're a Championship club then you never know, we might have a chance. Lloyd has got Championship ability.

"The focus now is on Brentford, though. We've got four tough games, but four winnable games."

Sam also scored in a 3-0 win against Leyton Orient on Good Friday, after setting up leading scorer Jeff Hughes to score their second at Brisbane Road.

Asked whether he would consider a permanent move to Meadow Lane, he said: "I've loved my time here so far. I jumped on the gaffer when I scored (against Yeovil) so I must be liking him too. He just lets me play.

"My contract's up so we'll see what happens. Right now, it's just great to be playing well, creating and scoring goals.

"We're in the play-offs now and that is the ultimate ambition, so that is all I'm focused on."