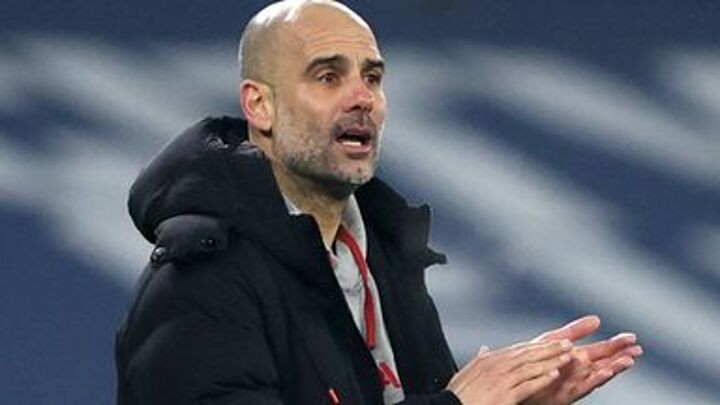 Pep Guardiola has urged his Manchester City players to "increase the distance" between them and Manchester United with victory in Sunday's derby.

City have won 21 games in succession and could move 17 points clear at the top of the Premier League table by beating second-placed United at the Etihad Stadium.

Guardiola rubbished suggestions, however, that he was scared of Ole Gunnar Solskjaer's side.

The City boss said: "Scared is not the right word to explain when I approach an opponent. I have incredible respect but I think at the same time, I can lose or I can win.

"We know the quality they have. I was really impressed with the way they played at Stamford Bridge, the intensity, the rhythm, high pressing, how brave they are in many aspects.

"We accept the challenge and want to do a good game to try and win."

Guardiola added: "I know how difficult United are. We have experienced that in the last years and I have the feeling that every year they are a better team than the previous season.

"They are a team with quality and for more than one year they have not lost away, and they have good results at the Etihad Stadium.

"But at the same time we know the opportunity we have to increase the distance.

"We spoke in training about what we have to do to beat them on the pitch and the way we want to play."

Guardiola has a fully-fit squad available for the first time this season, with the return of defender Nathan Ake after a muscular problem meaning the league leaders have no players in the treatment room.

"Good news for us, Nathan is back," said Guardiola. "He made part of the training session and felt really good.

"Everyone is fully fit and that is important for the next few weeks ahead of the international break, and hopefully the people will come back well after that."

Guardiola said that any players needing to quarantine on return will not be flying away on international duty this month.

He said: "We didn't speak. We will wait this game and maybe next game we'll talk about it but it makes no sense to go there and come back to isolate for 10 days.

"We're working incredibly hard, the break comes at important part of the season. It doesn't make sense and they will not fly. If they can come back and train they will fly."