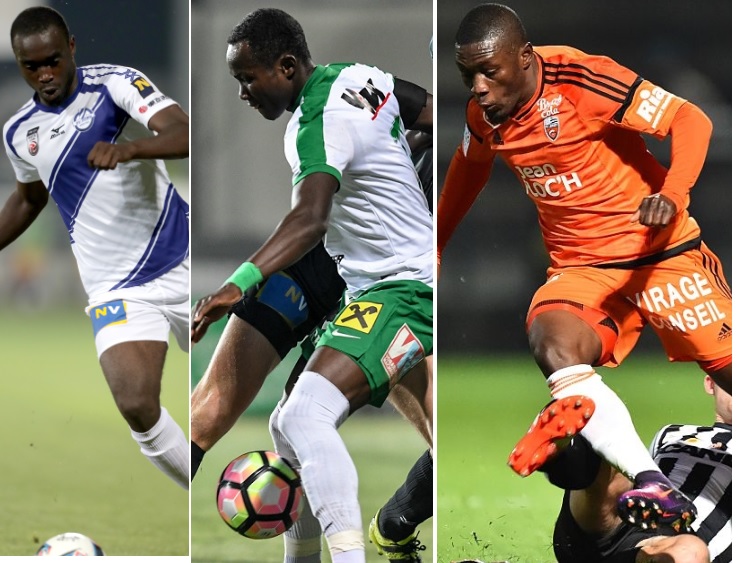 Striker Raphael Dwamena continued to dominate the headlines among Ghanaian players abroad after scoring his 21st goal of the season in Austria.

Meanwhile Majeed Waris netted in his third straight for Lorient in France while Inaki Williams rediscovered his scoring boots in Spain.

GHANAsoccernet.com's Players Abroad maven El Akyereko has comprehensive wrap on how the players fared across the globe.

Striker Kwesi Appiah could not make the Crystal Palace grades as they hammered Southampton 3-0.

Sunderland posted a 2-1 win over Leicester City at the Stadium of Light. Ghana defender Daniel Amartey played the entire game for the Foxes but Jeffrey Schlupp warmed their bench.

Timothy Fosu-Mensah failed to make the Manchester United squad for their 1-1 draw at Everton.

In the Championship, there was no Denis Odoi in the Fulham side that consigned Reading to a 5-0 loss.

Newcastle United slipped to a 2-1 loss at Nottingham Forest. Ghana winger Christian Atsu was unused as the nine-man Toons lost the clash.

Aston Villa slipped to a 2-0 away loss at Leeds United. Jordan Ayew replaced Albert Adomah in the 77th minute.

In the National League, former Chelsea youth team captain Nana Ofori-Twumasi was in action for Maidstone United but defender Anthony Acheampong warmed their bench as they lost 2-0 against Bromley.

Former Watford striker Bernard Mensah was in action for Aldershot Town as they defeated Boreham United 2-0.

There was neither Quincy Owusu-Abeyie nor Reagy Ofosu in the NEC Nijmegen side that lost 2-0 at Heracles on Friday.

Dutch-born Johnathan Opoku Agyemang scored for VVV-Venlo to help them draw 1-1 with Telstar.

Manchester City loanee Thomas Agyepong came off the bench to score for NAC Breda in their 3-1 victory over Almere City on Friday.

In the third-tier league, Dutch-born Felicia Ofori Lovette scored one of the consolation goals for Sparta II who lost 4-3 against Spakenburg.

Defender Carlos Opoku was in action for Koninklijke HFC in their 2-1 home loss against De Treffers.

Kevin Luckassen could not make the St Polten squad for their 1-0 loss against Rapid Wien.

Defender Kadri Mohammed sat on the bench for Austria Wien as they picked a vital 2-0 win at Admira.

Goalkeeper Lawrence Ati-Zigi, Gideon Mensah and Samuel Tetteh all started the game for Liefering who won 1-0 at Wiener Neustadt.

On-fire Raphael Dwamena and Kevin Tano scored against each other as Austria Lustenau succumbed to a 3-2 home loss against Horn on Friday. Dwamena has now scored 18 league goals and 21 goals in all competitions.

Former WAFA defender Kennedy Boateng could not make the LASK Linz squad as they won 4-0 against Blau-Weiß Linz to stretch their lead at the top of the table.

Youngster Eric Ocansey failed to make the KAS Eupen squad for their 1-0 loss at KV Mechelen on Friday.

Both Frank Acheampong and Emmanuel Sowah Adjei were on the Anderlecht bench in their 3-1 win at Kortrijk. But Acheampong was introduced in the second-half. However defender Dennis Appiah is still nursing injury.

Nana Opoku Ampomah warmed the bench for Waasland-Beveren when they drew 1-1 with Zulte-Waregem.

Bennard Kumordzi and Eugene Ansah both warmed the benches of Genk and Lokeren as they clashed on Sunday.

Bottom-placed Westerlo held Gent to a 0-0 draw. Both Mitch Apau and Elton Acolatse returned to the Westerlo team and started the match but injured Nana Kwesi Asare missed the game for Gent.

Winger Solomon Asante came off the bench to play for TP Mazembe who battered Dibumba 4-0. But defender Yaw Frimpong and Daniel Nii Adjei were on the Ravens bench.

Midfielder Derrick Mensah could not make the Karvina squad for their 1-1 draw at Zbrojovka Brno.

Striker Benjamin Tetteh scored a 30th minute goal for Slovacko in their 3-2 win at Dukla Praha on Sunday.

Horsens' miserable run in the Superliga continued when they lost 2-1 against struggling Viborg on Saturday. Talented Ghanaian midfielder Joseph Mensah could not make their squad for the game.

Chelsea loanee Baba Rahman was dropped to the bench by Schalke 04 who lost 2-1 at Red Bull Leipzig. But youngster Bernard Tekpetey could not make the Schalke squad for the game.

There was no Daniel Opare in the Augsburg squad that drew 1-1 with Eintracht Frankfurt. But Austria-born Ghanaian starlet Kevin Danso warmed the bench for Augsburg.

Hannover 96 posted a 3-2 win over Heidenheim. Ghana youth midfielder David Atanga could not make the Heidenheim squad for the game.

German-born Erich Berko was in action for Dynamo Dresden who lost 1-0 against 1860 Munich.

In the Liga 3, midfielder on-loan Manfred Osei-Kwadwo played until he was replaced in the 92nd minute by Sonnenhof who won 2-1 against Wehen Wiesbaden.

Hansa Rostock slipped to a 4-1 home loss against Holstein Kiel. Ghanaian midfielder Evans Owusu Nyarko could not make the Kiel squad for the game.

Ghanaian pair of Marcel Appiah and Okyere Wriedt played for Osnabruck in their 1-1 draw with Fortuna Köln. German-born defender Kwame Kusi played at the heart of defence for Koln.

In the Regionalliga, both Kentu Badu and Anton Donkor played for Wolfsburg II who lost 2-0 against Schwarz-Weiß.

Prince Owusu sat on the bench for Stuttgart II who beat Saarbrücken 2-0.

Former Ghana U20 forward John Benson and Fred Dabanka were in full time action for Al Ahli who succumbed to a 1-0 home loss against El Jaish.

In other games, Babo Barro played 65 minutes for Al Khor who lost 1-0 to Al Sadd.

Al Gharafa continued their fine form in the Star League as they beat Al Rayyan 3-2. Defender Rashid Sumaila played for the winners while Lawrence Awuley Quaye and Kwasi George also played for them.

Former Wa All Stars midfielder Joshua Adjei played the entire game for Cape Town City FC who beat Bidvest Wits 3-2 at their own home grounds to maintain leadership of the PSL.

There was no Edwin Gyimah or Bernard Morrison in the Orlando Pirates squad that drew 2-2 with Highlands Park.

Dennis Danso Weidlich was at the heart of defence for Maritzburg United who beat Baroka 1-0.

Former Ghana U20 defender Lawrence Lartey was booked in the 65th minute and played full throttle for Golden Arrows.

Defender Joseph Attamah earned his full Super Lig debut for Istanbul as he played full throttle in their 2-2 draw with Antalyaspor.

Alanyaspor slipped to a 3-2 home defeat against Konyaspor. Both Nuru Sulley and Isaac Sackey started the game for the losers.

Former Liberty Professionals midfielder Kamal Issah was introduced in the 55th minute by Gençlerbirliği who won 2-0 at Adanaspor.

Defender Jerry Akaminko watched from the bench as his Eskişehirspor side claimed a 6-0 win over Mersin.

Midfielder Seidu Salifu watched from the Adana Demirspor bench as they drew 2-2 with Bandırmaspor.

Defender John Boye played for Sivasspor in their 2-1 away win over Giresunspor.

Striker Majeed Waris scored in his third straight game as his Lorient side drew 2-2 with Angers on Saturday in the Ligue 1.

In the Coupe de France, striker Grejohn Kyei scored a brace for Stade de Reims as they won 7-0 against Villeneuve-d'Ascq.

Former Ghana U17 midfielder Charles Boateng was in action for Avranches as they sneaked past Vannes 2-1.

Midfielder Kwadwo Asamoah watched from the Juventus bench as the Old Ladies nicked a 3-1 win over Atalanta.

Afriyie Acquah was introduced to play the last 6 minutes for Torino who lost 2-0 at Sampdoria.

In the Serie B, defender Bright Addae missed Ascoli's 2-1 at the Stadio Partenio. But Inter Milan loanee Isaac Donkor played the entire 90 minutes while Patrick Asmah was unused.

Former AC Milan forward Kingsley Boateng warmed the Bari bench in their 2-0 win over Salernitana. But Moses Odjer was not in the losers squad for the game.

There was neither Maxwell Acosty nor Richmond Boakye in the Latina squad that drew 1-1 with Virtus Entella.

Ransford Selasi failed to make the Novara squad when they won 2-1 against Vicenza on Saturday.

Defender Masahudu Alhassan warmed the bench for Perugia in their 2-2 draw with Hellas Verona.

Former Torino starlet Emmanuel Gyasi was in action for Pistoiese in their 0-0 draw with Renate on Saturday.

Prince Buaben played the last 5 minutes for Hearts who drew 2-2 with Ross County.

And, former Leicester City lad Joe Dodoo was unused by Rangers in their 2-1 win over Aberdeen.

Thomas Partey warmed the Atletico Madrid bench in their 0-0 draw with Espanyol on Saturday.

Inaki Williams scored the second goal for Athletic Club in their 3-1 win over Eibar.

Kevin-Prince Boateng was not part of the Las Palmas squad that held Deportivo Alavés to a 1-1 draw.

In the Segunda Division, goalkeeper Razak Brimah dropped to the bench as his Cordoba side won 2-1 at Reus Deportiu.

Alhassan Wakaso was introduced in the 64th minute by Rio Ave who won 3-1 against Tondela.

Emmanuel Boateng played 83 minutes for Moreirense when they posted a 3-1 win over Nacional.

Meanwhile Emmanuel Oti could not make the Sporting Braga squad for their 1-0 loss at FC Porto.

Former FC Porto starlet Lumor Agbenyenu played for Portimonense in their 3-0 win over Academico Viseu. But Emmanuel Sarpong was not in their squad for the game.

Defender Emmanuel Hackman was booked in the 56th minute as he played the full time action Desportivo Aves in their 1-1 draw with Famalicão.

Ernest Ohemeng was introduced in the 70th minute by Academica who won 1-0 against Sporting Braga II.

Both Richard Ofori and Henry Mendarius played for Sporting Covilha but Prince Agyemang warmed their bench as they beat 2-0.

Striker Kwame Nsor scored the only goal of the game for União Madeira as they triumphed over Santa Clara.

Young Boys defeated FC Basel 3-1 on Saturday. Ghanaian defender Kasim Nuhu was sent off in the 45th minute but Swiss-born Kwadwo Duah was unused by Boys while Gregory Kwesi Wuthrich missed the game with injury.

FC Sion suffered a 2-1 loss at St Gallen. Ebenezer Assifuah was introduced in the second-half but Ishmael Yartey was not part of their squad.

Midfielder Jeffrey Sarpong scored the equaliser for Veria in their 1-1 draw with Panaitolikos. Michael Asigba was in action for Veria.

Owusu-Ansah Kontor played for Larissa in their 2-1 home loss against Atromitos.

Wakaso Mubarak played 63 minutes for Panathiniakos in their 1-0 win over PAOK.

Striker Kwame Karikari was introduced in the 54th minute by Stal Kamianske in their 2-0 away loss at Shakhtar Donetsk.