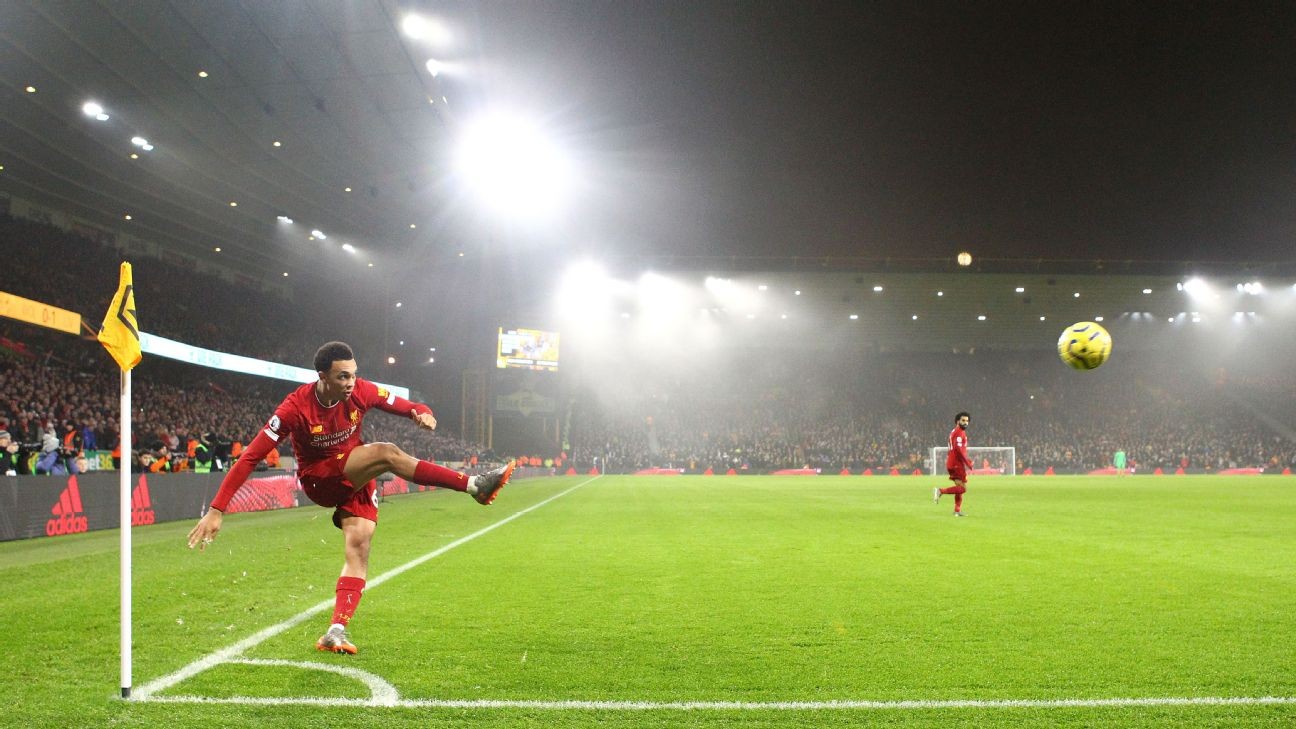 Corner kicks can seem pointless, can't they? Over the past decade in Europe's top five leagues, about three percent of all corners have led to goals. If goals are so unlikely, why even try? If it's a choice between lumping the ball into the penalty area, with the faint hope that this is one of the three times out of 100 that your team miraculously converts, or playing it short and re-establishing your standard patterns of possession, then, well, it doesn't seem like much of a choice at all.

Jose Mourinho famously echoed the corner-kick skepticism after he arrived in England to manage Chelsea. As he said to Gianluca Vialli in The Italian Job (co-written by ESPN's Gabriele Marcotti): "How many countries can you think of where a corner kick is treated with the same applause as a goal? One. It only ever happens in England."

But perhaps the British fans were on to something.

- Stream new episodes of ESPN FC Monday-Friday on ESPN+
- Stream every episode of 30 for 30: Soccer Stories on ESPN+
- Where Europe's top leagues stand on finishing 2019-20 season

"People just assume that set pieces are a waste of time," said Stats Perform AI Scientist Paul Power. "But we know from the research we've looked at that if you have a very good set-piece regime, that's basically the equivalent, in terms of goals, of spending £80 million on a striker." That echoes with what Ted Knutson, founder of the analytics consultancy Statsbomb, told ESPN last year: "Right now, the average team scores between 0.30 to 0.35 goals a game from set pieces. The best teams can bump this up to 0.75 to 0.80."

In 2018, Power co-wrote a paper featured at the Sloan Sport Sports Analytics Conference called "Mythbusting Set-Pieces in Soccer." One of the busted myths: teams are actually more likely to score from set pieces (1.8 percent) than from a normal open-play possession (1.1 percent).

"You're basically doubling your odds of scoring if you have taken a shot from a set piece," Power said. Plus, those aggregate numbers don't take into account that most teams still aren't putting much effort into scoring from corners.

"It can be improved upon," said Euan Dewar, an analyst with Statsbomb. "This is the problem that arises when people do studies on the effectiveness of set pieces. A lot of teams could be doing better, so using them as the basis for how useful set pieces could possibly be is going to lead you astray."

But that stat: three percent of corners lead to goals? The reality is that's on the low-end of what top clubs are actually capable.

During the 2013-14 Premier League season, Power was consulting for Everton. Under Roberto Martinez, the club put together its best-ever top-flight season, finishing fifth on 72 points. Pretty good, but it could've been even better.

"There's this whole perception that scoring from set pieces is almost cheating," Power said. "You know, like it's not part of the beautiful game. [Former Everton manager] Roberto Martinez just didn't practice set pieces. He wanted to know everything about open play: synchronization between players, how to create space through intricate movements. But if you looked at a set piece, there was no interest. This still kind of plagues soccer, from top to bottom."

That year, Everton finished seven points back of fourth-place Arsenal. They also took the second-most corners in the league, behind only league-winners Manchester City. However, Manuel Pellegrini's side also led the league in goals from corners (15), while the Toffees ended up in the middle of the pack with seven. The difference between elite execution and league-average neglect might have also been the difference between the Champions and the Europa League.

But what if a coach wanted to be, say, the anti-Roberto Martinez, searching for beauty among the pre-programmed routine? How would he go about it? Last year for Statsbomb, Dewar put together a brilliant modern taxonomy of the different types of effective set plays. Blind spots? Flick-ons? Picks? Misdirections? Picks into a blind spot created by misdirection that lead to a goal from a flick-on? It's all in there.

"Inswingers would generally be preferred over outswingers due to their trajectory," Dewar said. "They're curving in toward goal and provide multiple points along said trajectory at which runners can get to the ball."

Power agrees. He found that teams have a 2.7 percent chance of scoring from in-swinging corners, compared to a 2.2 percent chance from out-swinging corners. While out-swingers actually lead to shots more often (20.9 percent compared to 18.6 percent), shots taken from in-swingers are significantly more likely to lead to goals (10.8 percent, compared to 6.5) because they almost always occur closer to the goal frame, thanks to the direction of the ball in flight.

"Aiming for the near post is generally going to be better for the simple fact that far-post corners are in the air for longer and thus give the defence more time to read and react," Dewar said. And that logic works even better if someone at the near post heads it across the goal.

"Teams who use flick-ons are more likely to score rather than just from a direct cross," Power said. "It causes that kind of perturbation, disrupting the structure." His research found that flick-ons lead to goals 4.8 percent of the time, compared to just 2 percent of the time for a shot directly from the corner. The modern master of these moments is everyone's favorite: Tony Pulis, with Power saying: "He was actually a magician at creating goals from set pieces."

While his Stoke City teams dominated from throw-ins, Pulis's West Brom sides made their hay whenever the ball crossed the touchline. Among every individual club season in Europe's top five leagues since 2008-09, the 2016-17 iteration of the Baggies are the only side to score on 10 percent of their corners. No one else has even broken 9 percent. Who knows if he'd do it -- or if anyone would hire him -- but the currently unemployed Pulis would make one hell of a set-piece coach for any club, whether it be Barcelona, Borussia Monchengladbach or Burnley.

Among current practitioners of the flick-on from corners, both Power and Dewar pointed to Liverpool, which is no surprise given that they led the top-five leagues in set-piece goals last season.

"In terms of the flick-on situations, Sadio Mane is the best at creating them," Power said, while also singling out a slightly less prominent side. "Leganes are actually one on the smallest teams in Spain, but they have some of the most elaborate set-piece routines that create the space for their players to get into."

Dewar also mentioned Ajax, who led the Champions League in set-piece goals during their run to the semifinals in the 2018-19 campaign.

"Ajax under Erik Ten Hag have stood out, particularly when they had Matthijs De Ligt," he said. "They used his size really well, using things like picks -- as you'd refer to them in basketball -- to get him free or match him up against smaller players. They also consistently execute and have a fancy few designs up their sleeves."

If that's not enough to appease the football-hipsters, Dewar offered up another option. "If you want an 'out there' shout: PAOK, in the Greek league. They have a great mix of genuinely great, well-rehearsed set-piece designs and some wacky ones that I wouldn't necessarily call 'good practice,' but I enjoy them all the same."

Of course, if teams start hammering in-swingers at the near-post, employing picks and utilizing flick-ons, it creates another dilemma: How do you stop them? For starters, stop worrying about the woodwork. "If a team puts a player on both posts, they concede the most goals at 2.7 percent of the time," Power said. "Whereas, if you just have a player on the back post, you only concede 1 percent of the time."

Dewar took it a step further. "Don't put men on the posts on the defensive side. Just don't. You'd rather either have those players help to stop the initial shot rather than hope they can keep it out or have them lurking on the edge of the box to spring a counter."

And what about everyone's least-favorite argument, the disagreement that will never die?

"There is statistically no difference between man-to-man and zonal marking," Power said. "The only difference is the perception bias because when a player normally scores against zonal there is nobody near him. It's as simple as that."