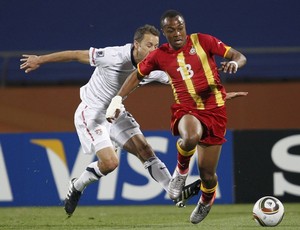 In a nucleus of new-found football talent from west Africa, young Ghanaian midfield dynamo Andre â€˜Dedeâ€™ Ayew has been the name on everyoneâ€™s lips.

When the Ghana camp was rocked by a spate of injuries on the eve of the 2010 CAF Africa Cup of Nations, coach Milovan Rajevac turned to a group of untested youngsters to shoulder the burden.

He not only promoted the spine of the team that brought Africa the U-20 FIFA World Cup in Egypt, but he also handed them free reign to roam and a responsibility to bring pride to Ghana.

This presented the young and blossoming Ayew, who had been one the shining stars in Egypt, an opportunity to take his game to the next level.

The comparison to his father, three-time African Footballer of the Year Abedi Pele, has almost overshadowed Dedeâ€™s footballing ability and achievements. But slowly, he is crafting his own identity on the field.

In an exclusive interview withÂ FIFA.com, Ayew relives some of the moments that turned him into one of Africaâ€™s top prospects and talks about his wish to win the UEFA Champions League, the Cup of Nations and the FIFA World Cupâ„¢.

The road to the 2012 Africa Cup of Nations begins this weekend against Swaziland. What are your thoughts? Andre Ayew: Obviously itâ€™s going to be a tough road to the qualifiers and Iâ€™m not just saying that because itâ€™s a usual thing to say. Itâ€™s going to be tough because a lot of teams will now be targeting us. If you look at some of the teams we have to play, they are not easy opponents even for so-called small countries. In football, anything can happen that is why itâ€™s important for us to step up and work hard. First we have to play Swaziland and we donâ€™t know much about them. They are a closed book to us, but Iâ€™m sure they have watched us a lot of times. Then we have countries like Congo, Sudan â€“ not easy opponents, especially away from home.

Suddenly, you have become one of the most recognisable faces in this team. Do you feel added pressure now? Pressure is part of football. Itâ€™s always there. I would be lying if I said I donâ€™t feel pressure, but itâ€™s good pressure. Iâ€™m still young and I want to enjoy my football. I think after the World Cup in South Africa, people expect a lot from us, which is natural after the kind of performance we had.

There was a lot of speculation about your future at club level. Have you settled now, and what are your personal goals? I'm at Marseille and happy there. At club level, I have always said that I want to win the Champions League - itâ€™s one of those accolades that any player would like to add to his CV. We have good players at Marseille with a lot of experience. We are a very confident bunch and we know that we can do it. We have to win the league first and do it time and again. Of course teams like Bordeaux and Lyon also have good players and all the teams are good enough to win the league.

At national team level, my mission is twofold: we first have to win the Africa Cup of Nations, which we came very close to doing in Angola when we lost to Egypt. That was a disappointing moment for us, but now we have to focus on 2012. Of course our biggest dream would be to win the World Cup.

Talking about the FIFA World Cup, Ghana came agonisingly close to making history by becoming the first African side to reach the last fourâ€¦ That was a painful experience for us. I think even today that hurts a bit. To go out in that way was really tough for us, and just to think about it brings some sad memories. We were so close, but yet so far. I donâ€™t want to talk about that day a lot; it will stay in our memories for a long time. But we try not to think about it, we try to look at some of the positives that we gained from that tournament.

For me, itâ€™s surprising that no African side has reached the semi-finals of the World Cup. Africa is home to some of the best players in the world. I think we just need a little bit of luck. It was good that the continent hosted its first World Cup, and it was a resounding success. From now on, people will take Africa seriously; they will know that Africa is capable of organising great events. We were overwhelmed with the support we got from South Africans during the tournament. Africa was united.

What did the coach Rajevac say in the dressing room after that quarter-final exit to Uruguay? Everyone was devastated; we knew we were so close to advancing to the semi-finals. You could see the disappointment on each and every face after the match. Not much was said. There was no need for words.

The Black Stars camp looks like a happy family. Is that the reality? Of course we are a happy bunch; we have a lot of respect for each other. When I arrived here, there were guys like Michael Essien, (Stephen) Appiah, (John) Mensah, who were big stars, but you could see the way they handled themselves with the other players. Their attitude was always the same. We learned a lot from their behaviour.

You have probably been asked this question before, but how do you feel about being compared to your father? [laughs] I guess some people will always make that comparison, but that doesnâ€™t bother me. My father played his part and he was one of the greatest players. I donâ€™t want to compare myself to him. I believe I have to just keep on being myself. I have my own life and my own goals.