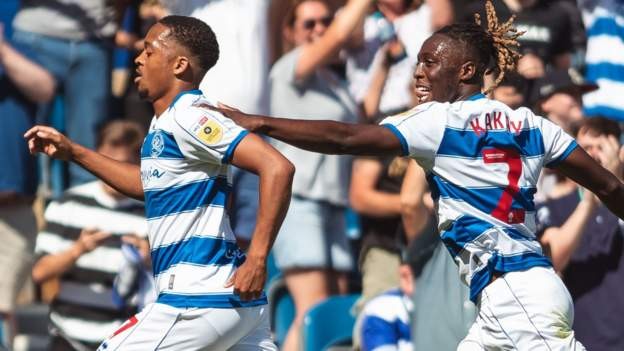 QPR's Chris Willock scored on his first appearance of the season

QPR earned their first points of the season as they held off a strong Middlesbrough fightback to claim a narrow win at Loftus Road.

Chris Willock scored a spectacular opener, driving forward and shrugging off two defenders before smashing a shot into the top corner before James Dunne headed in Ilias Chair's corner to double the lead.

It was 3-0 when Lyndon Dykes stooped to head in Stefan Johansen's free-kick before Matt Crooks' bullet header gave the visitors some hope before the break.

Marcus Forss' close-range finish on his first start made it 3-2 and an equaliser was chalked off when Paddy McNair's effort was ruled out for offside before Boro's Darragh Lenihan was sent off in stoppage time.

The sides produced nine goals in their two league meetings last season and the pattern continued in a goal-laden opening hour.

Rangers failed to land a shot on target in their league opener at Blackburn and manager Michael Beale's three changes worked as Willock and Dunne both found the net inside 30 minutes.

Rangers had lost four of their final five home matches in a dismal end to last season, but in Beale's first match in charge at Loftus Road it was a very different story with a stunning first-half display, Dykes capping it by ending his 13-game goal drought.

Boro have won just one of the last nine meetings, but gave themselves real hope when Crooks powered in a header and then crossed for Forss to make it 3-2 with more than 30 minutes left to play.

The visitors were much improved after the break and only the assistant referee's flag denied McNair from hauling them level from Ryan Giles' cross.

But late on it was the hosts who went closest to the game's sixth goal on the counter as Albert Adomah flashed an effort wide before Lenihan saw red when his foul denied Macauley Bonne a clear run on goal.

Jonny Howson (Middlesbrough) wins a free kick in the defensive half.

Macauley Bonne (Queens Park Rangers) wins a free kick in the attacking half.

Attempt missed. Albert Adomah (Queens Park Rangers) right footed shot from the right side of the box is close, but misses to the left. Assisted by Ilias Chair following a fast break.

Jonny Howson (Middlesbrough) wins a free kick in the defensive half.