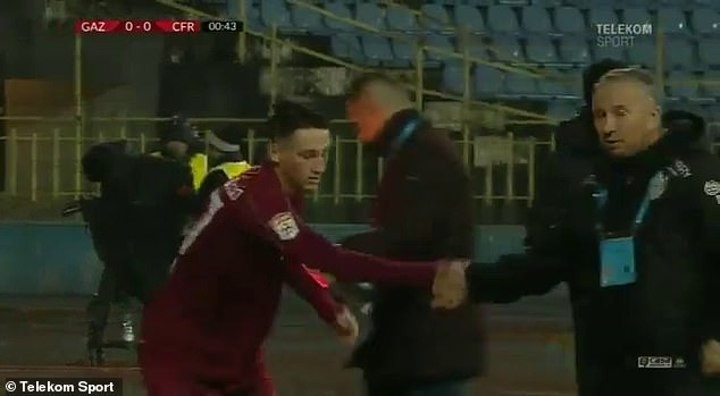 The laws state that at least two homegrown Under 21 players must be in the starting line-up and as a result, 18-year-old Alin Fica started and was replaced less than a minute in by Alexandru Paun without even touching the ball.

Speaking after the game, former Chelsea star Petrescu admitted he 'embarrassed himself' in blatantly working around the rules and said 'the rule made me do it.'

Petrescu added: 'I don't like what I did, I took away his confidence, but we have a lot of valuable players sitting in the stands and it's difficult for me.

'How he made his debut it's not good for him and for football.'

His move, seen as demeaning and embarrassing for the teenager hauled off, has been heavily criticised in some quarters.

Valeriu Iftie, president at Cluj's rivals FC Botosani, said: 'We all have to criticise him for that. is interest is to have a more experienced team, but that is an insult against the rules.

'Cluj’s target is to win the title, but this gesture in itself is reprehensible.'

Due to the homegrown rules it has been known for an Under 21 player to start and be taken off in the first-half, usually after 15-30 minutes, but nothing as extreme as the first minute.

The match, which was played behind closed doors in Romania, finished goalless in the end as leaders Cluj sit top of the play-off league standings, while Gaz Metan are bottom of the post-season group of six.