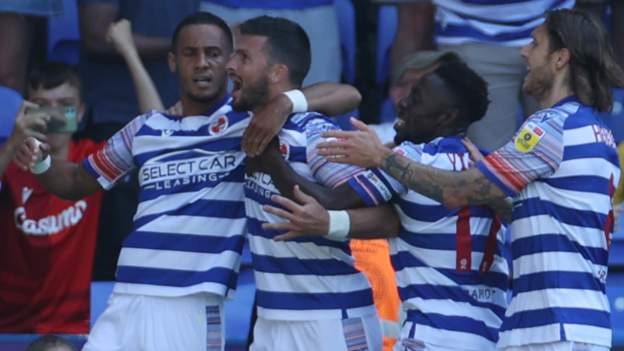 A stunning second-half strike from Tom Ince helped Reading come from behind to beat Cardiff City.

The visitors dominated the opening exchanges after Callum O'Dowda headed them into an early lead.

Shane Long equalised with a penalty after Ince was brought down by Curtis Nelson.

The Royals applied increasing pressure after the break and, although chances were scarce, they secured victory in style as Ince let fly with a 25-yard thunderbolt.

Having lost at Blackpool on the opening weekend, this was a spirited response from Reading as they embark on what manager Paul Ince predicted would be a "tough season" following the club's transfer embargo and financial struggles.

As for Cardiff, boss Steve Morison will rue his team's squandering of a fine opportunity to build on their victory over Norwich City last Saturday.

This is a new-look Bluebirds side after a summer of flux in which 14 new signings arrived and 10 senior players departed, and it was one of those off-season recruits, O'Dowda, who put them ahead in the fourth minute as he nodded in at the back post from Ryan Wintle's free-kick.

O'Dowda almost had a second soon afterwards but, after being teed up by Sheyi Ojo, his low shot was well saved by Reading goalkeeper Joe Lumley.

It was a bright start from the visitors, with Ryan Wintle dictating play from the base of midfield and O'Dowda and Ojo threatening on the break.

However, the momentum of the encounter soon swung in Reading's direction as they were gifted an equaliser.

Cardiff centre-back Cedric Kipre misjudged a header from a long ball, allowing Ince to run in behind and take the ball past keeper Ryan Allsop. As Ince then shaped to shoot, he was pulled back by Nelson, who conceded a penalty but was fortunate only to be shown a yellow card with no covering defender in sight.

Reading supporters bayed for a red but had to be content with a spot-kick, which the returning Long struck into the bottom corner to score on his first start for the Royals exactly 11 years since his last.

The leveller gave the hosts fresh impetus and they should have led when Andy Yiadom's teasing low cross was fired over from close range by Nesta Guinness-Walker.

Cardiff seemed to compose themselves again in the early stages of the second half, but Reading continued to grow in confidence and they took the lead in spectacular fashion.

Ince picked up possession around 30 yards out, took a touch forward and allowed the ball to bobble in front of him before unleashing a fierce strike into the top corner.

Neither side offered much in attack from that point, with Cardiff increasingly direct and desperate in their search for an equaliser while Reading were happy to hold on to their lead and a well-earned first win of the season.

Cardiff City manager Steve Morison told BBC Sport Wales: "We weren't good enough, we got the goal and could have had another one but we didn't do enough today, it was not a good enough performance.

"Last week we were brilliant, this week I can only apologise to the 2,000 odd fans who gave up their Saturday to come and watch us not turn up.

"We're only two games in, there will be a level of inconsistency because things take time... it's a very even league but it is unforgiven, and if you're not at it you will get beat."

Attempt missed. Cédric Kipré (Cardiff City) header from the centre of the box is just a bit too high. Assisted by Joe Ralls with a cross following a set piece situation.

Kion Etete (Cardiff City) wins a free kick in the attacking half.

Andy Yiadom (Reading) wins a free kick in the defensive half.

Jamilu Collins (Cardiff City) wins a free kick in the defensive half.

Kelvin Opoku (Reading) is shown the yellow card for a bad foul.

Jamilu Collins (Cardiff City) wins a free kick in the defensive half.

Kion Etete (Cardiff City) wins a free kick in the defensive half.