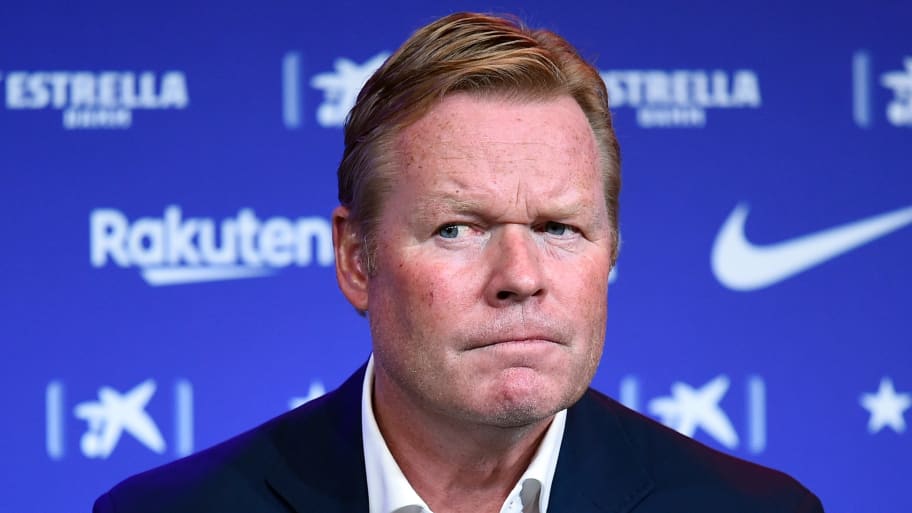 Ronald Koeman refused to answer any questions in his press conference ahead of Barcelona's trip to Cadiz on Wednesday, instead reading a prepared statement telling supporters not to expect 'miracles' from a 'rebuilding' team.

The Blaugrana needed a last-minute goal to draw 1-1 with Granada on Monday, leaving them languishing in eighth place in the league. That drab display came off the back of a 3-0 hammering against Bayern on the opening night of their Champions League campaign, highlighting a huge gulf in class between the two sides.

Koeman is under extreme pressure from supporters at Camp Nou, and he showed signs of stress in his latest press conference, refusing to answer any questions and instead reading out a prepared statement to his audience.

In the statement, the Dutchman insisted the the club is in a 'rebuilding situation' both on and off the field, and lowered expectations by declaring a high finish in La Liga to be a success, while Champions League glory would require 'miracles.'

“The club is with me as a coach in this rebuilding situation. The financial situation is linked to the sporting one and vice versa, as a squad we must rebuild the team without being able to make large investments.

“That takes time, the good thing about rebuilding is that young players will have opportunities like Xavi or Iniesta had, but patience is required. Remaining at the top end of the league would be a success, but in the Champions League you cannot expect miracles.

“The process we are in deserves to be supported. I know that the press recognises this process. It is not the first time in the history of Barça that this has happened. We count on your support in these difficult times.

“We in the team are very happy with the support of the fans. Visca el Barça."

Barça travel to Cadiz on Thursday, where anything but a win would only deepen Koeman's problems in this time of crisis.